19 Photos of People Honoring France Across the World 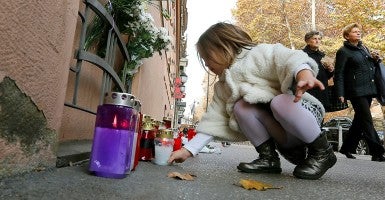 It’s what fueled the violent terrorists who killed more than 132 people and injured 350 more in Paris Friday. But it’s also fueling citizens and leaders with different religions, politics, and cultures around the world joining together in mourning.

While ISIS is unified in hatred for those who differ from it, the rest of the world is coming together in solidarity over sorrow for the victims of the attacks.

To protect them, to honor them. 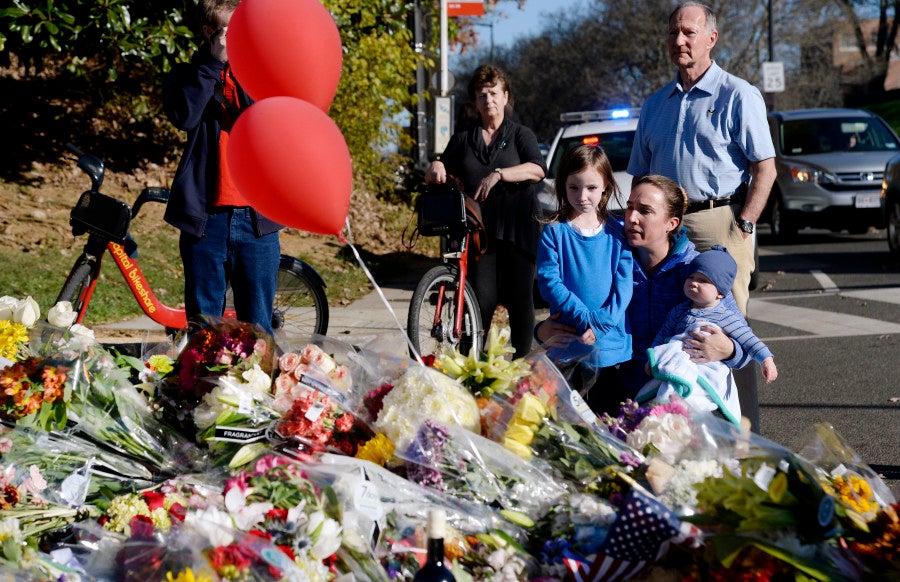 Signs and messages of support continue to grow at the Embassy of France in Washington, D.C. (Photo: Olivier Douliery/Newscom) 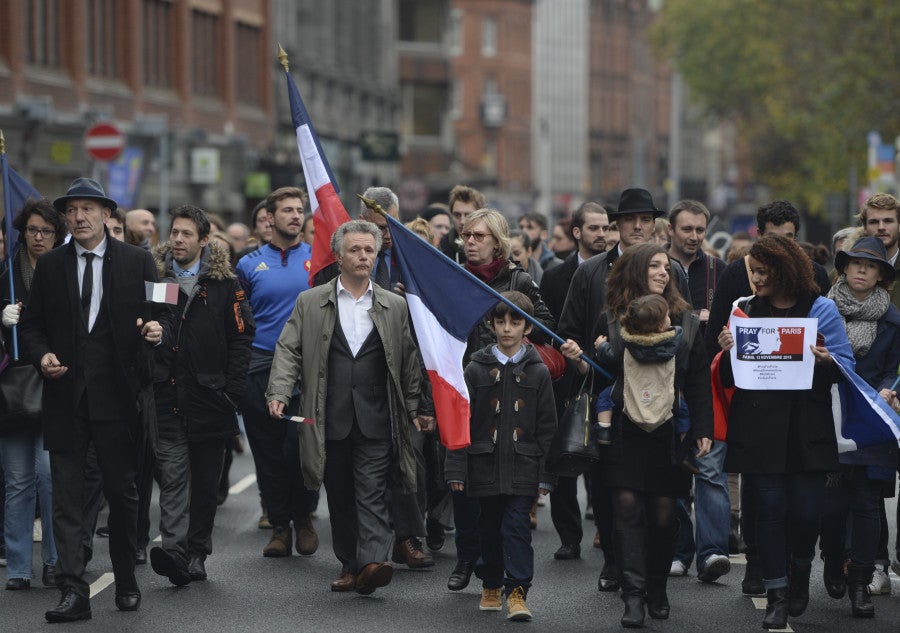 French and Irish join together during a “March in Solidarity with Paris” in Dublin’s city center Saturday. (Photo: Artur Widak/ZUMA Press/Newscom) 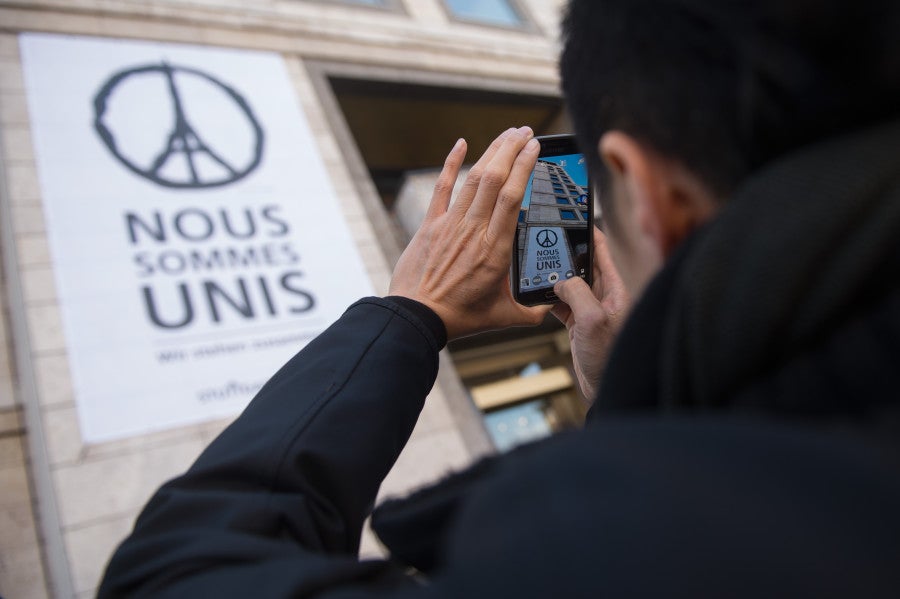 A giant poster, featuring a peace sign with the Eiffel tower and the writing “Nous sommes unis”—“we stand united”—is hung on the wall of the town hall in Stuttgart, Germany. The image, by French artist Jean Julien, has gone viral since the attacks. (Photo: Marijan Murat/Newscom)

Citizens participate in a Europe-wide minute of silence for the victims of the terror attacks in Paris at the Brandenburg Gate in front of the French Embassy in Berlin, Germany. (Photo: Newscom) 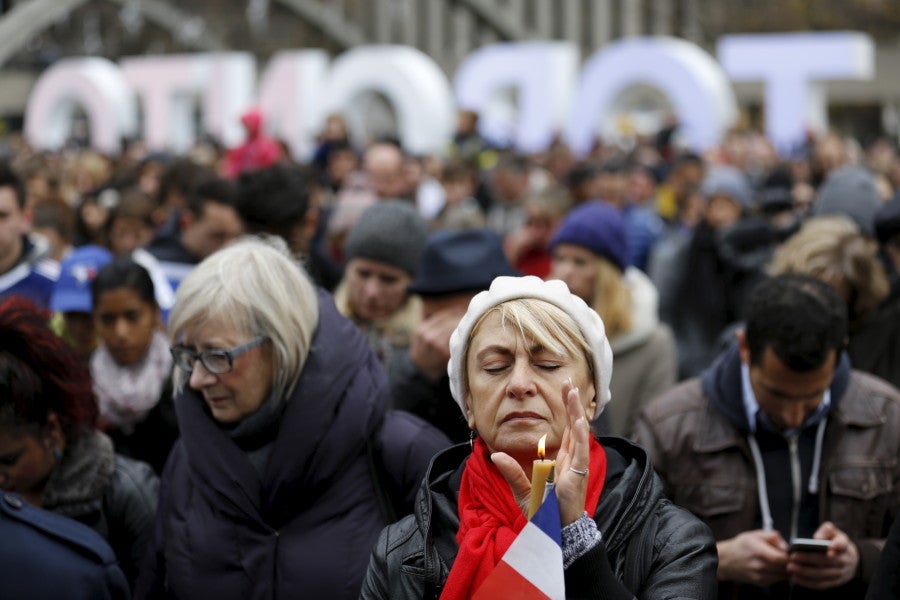 Lena Polyvyannaya of Toronto closes her eyes during a moment of silence outside city hall in Toronto, Canada. (Photo: Reuters/Chris Helgren/Newscom) 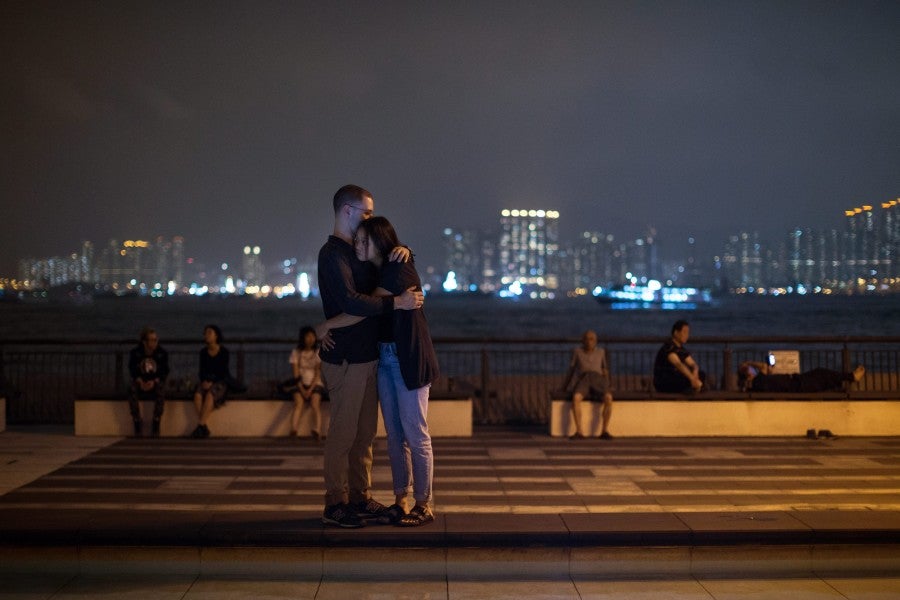 Mourners hug each other during a vigil in Hong Kong, China. (Photo: Jerome Favre/Newscom) 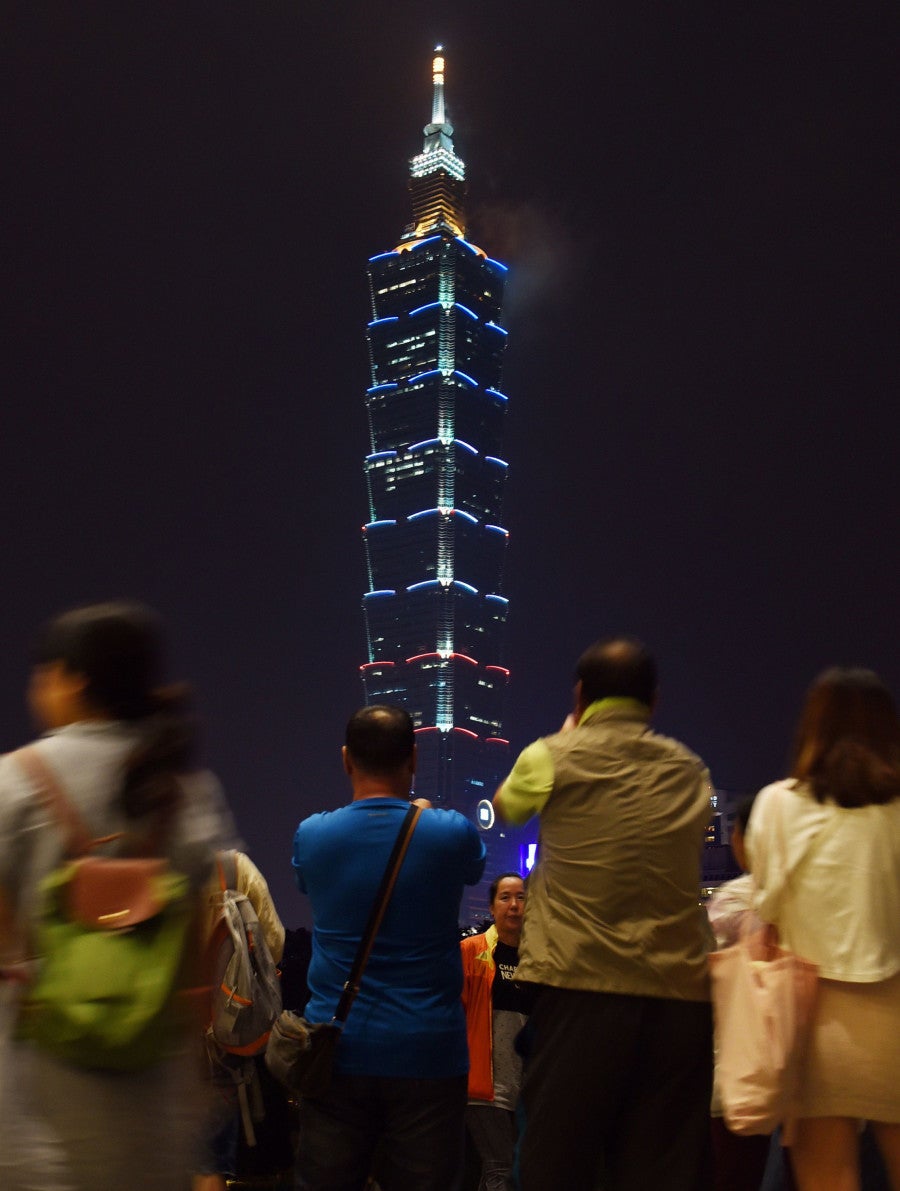 People watch the Taipei 101 building in Taipei, Taiwan, light up with the colors of French national flag. (Photo: Xinhua/Wu Ching-teng/Newscom) 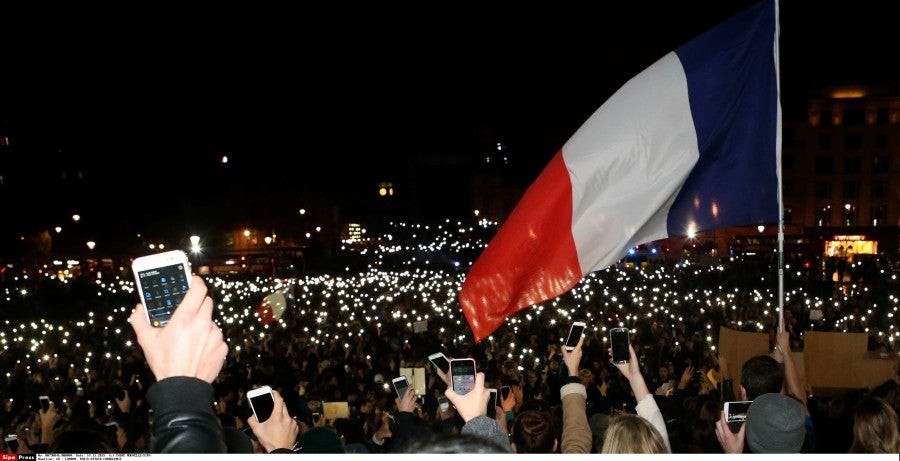 People attend a gathering to mourn for the victims of the Paris attacks at the Trafalgar Square in London. (Photo: Xinhua/Han Yan/Newscom) 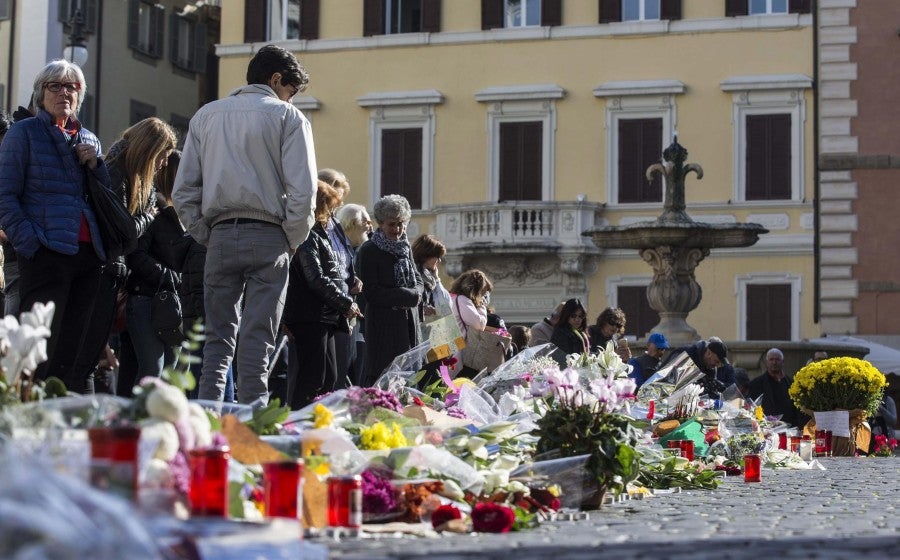 Flowers and candles placed in front of the French Embassy in Rome, Italy. (Photo: EPA/Massimo Percossi/Newscom) 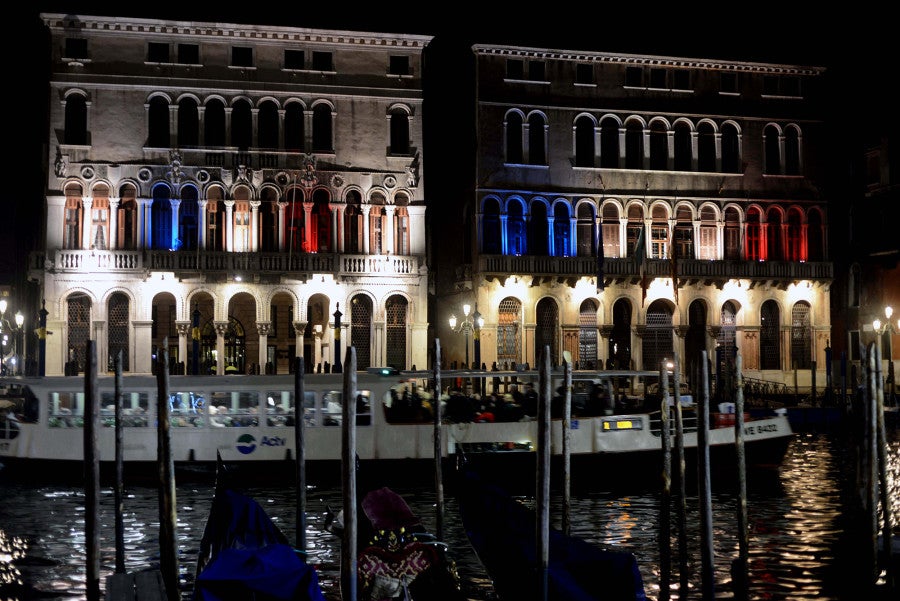 The Venice town council building is lit in red, white, and blue in solidarity with Paris. (Photo: Manuel Silvestri/Polaris/Newscom) 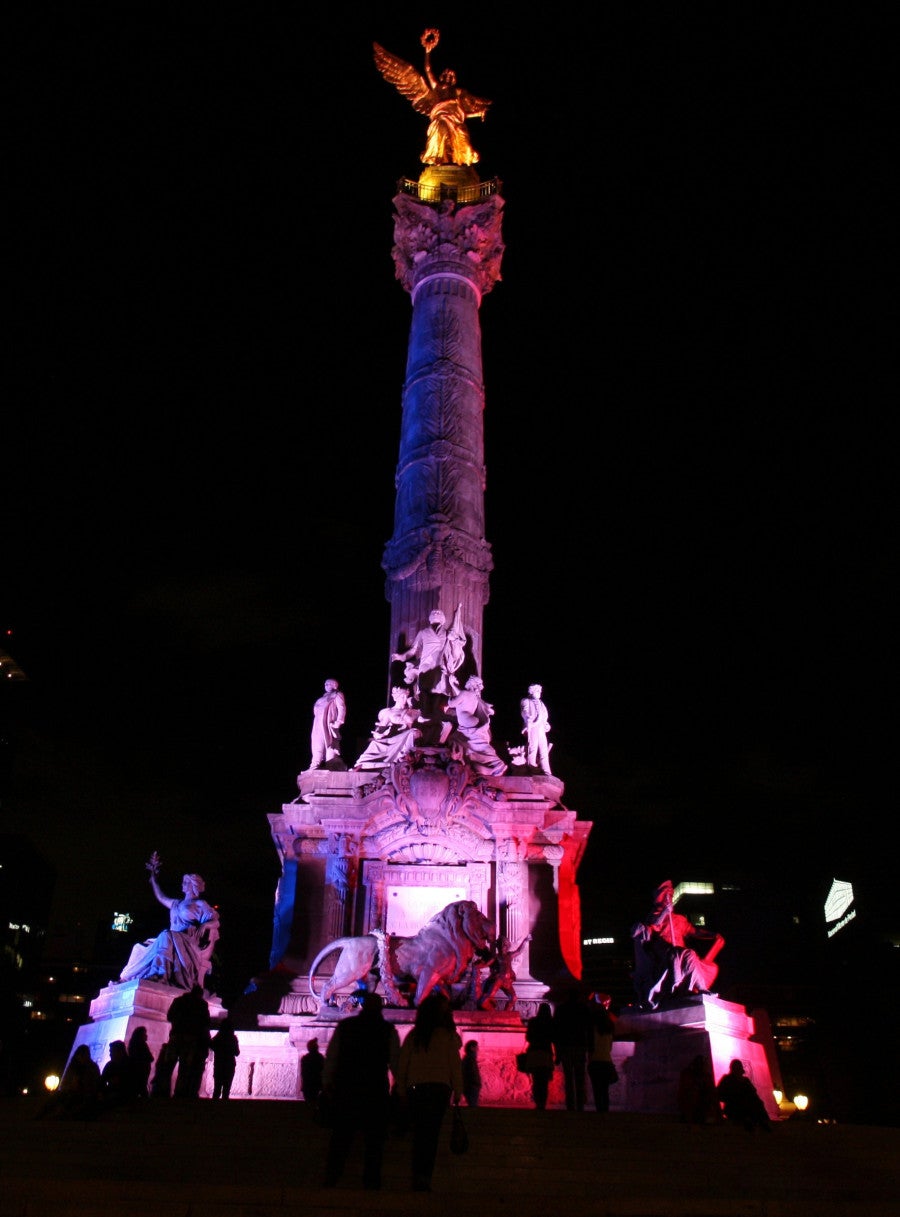 Independence monument is lit with the colors of the French national flag in solidarity with the victims of the deadly Paris attacks in Mexico City, Mexico. (Photo: EFE/Mario Guzman/Newscom) 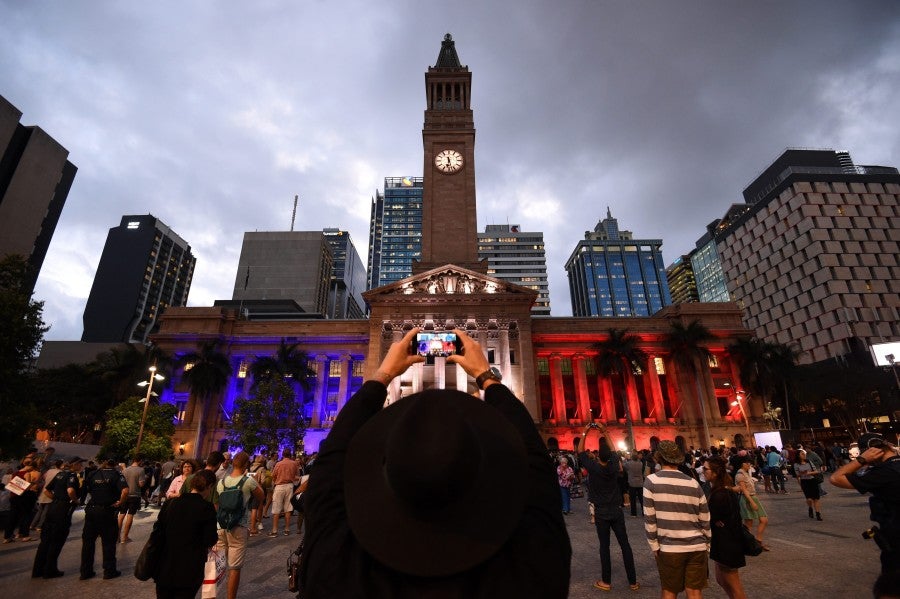 Brisbane’s Town Hall is lit as the French flag during a vigil in a show of support to the people of France in Brisbane, Australia. (Photo: Newscom) People gather outside the Notre-Dame cathedral to attend a mass in Paris, France. (Photo: Xinhua/Xu Jinquan) 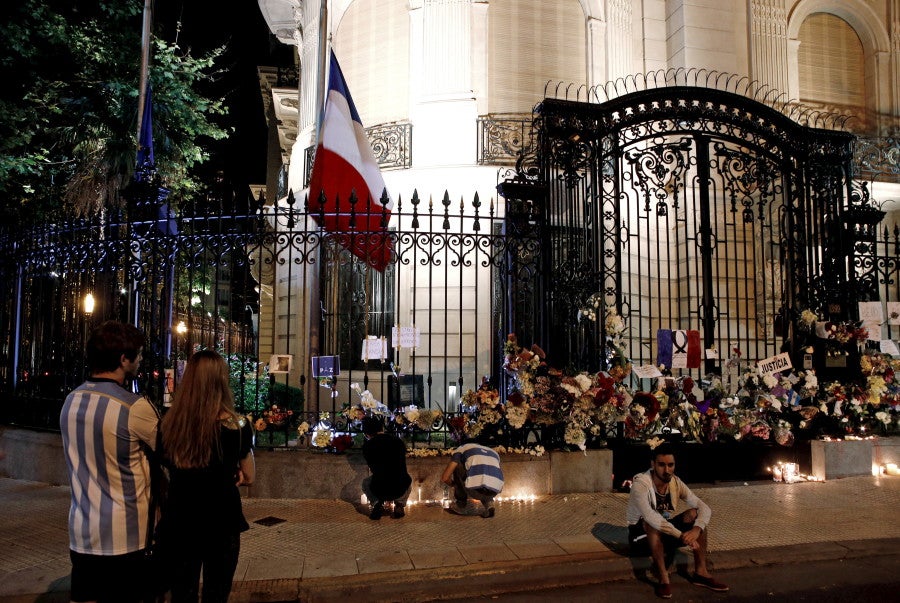 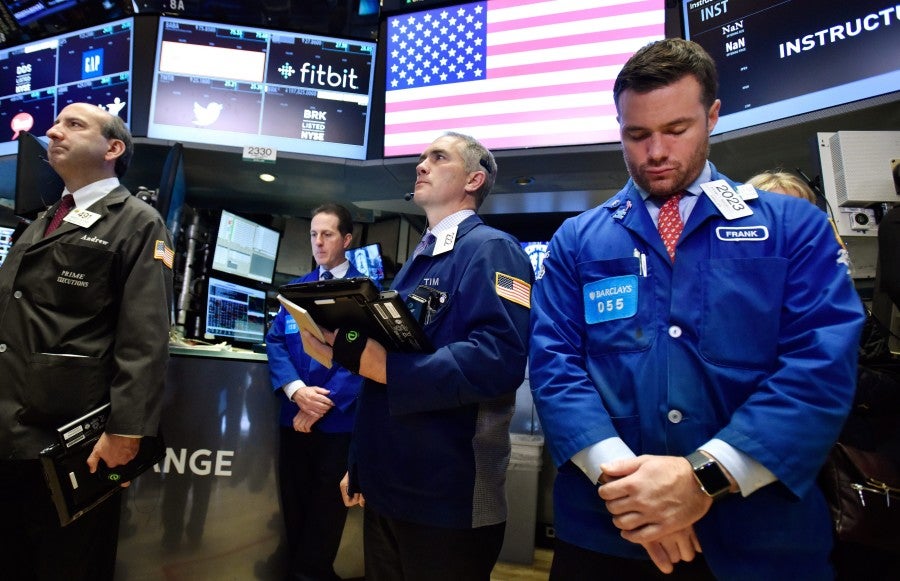 Traders pause on the floor of the New York Stock Exchange during a moment of silence for the victims at the start of the trading day in Manhattan. (Photo: EPA/Justin Lane/Newscom) 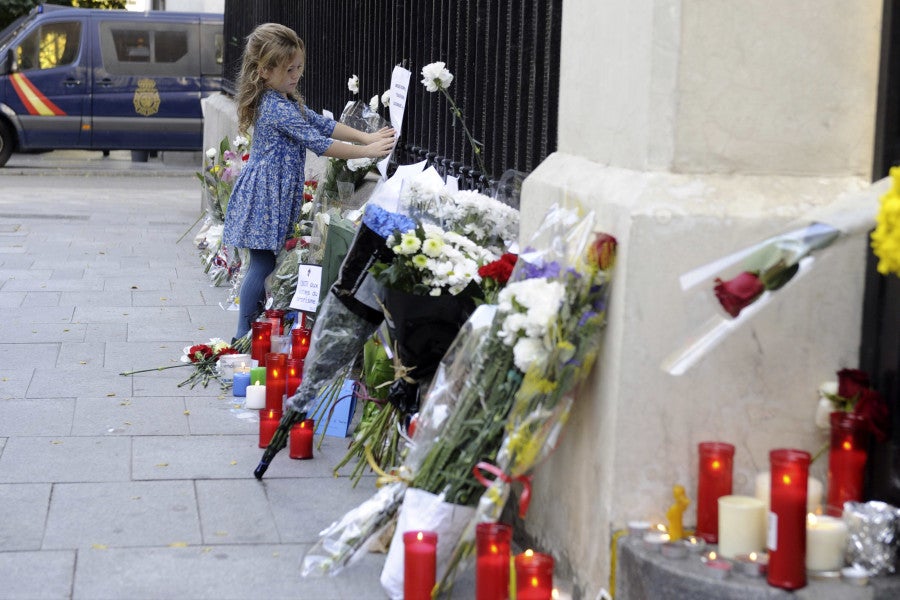 Spanish citizens of all ages place flowers and candles outside the French embassy in Madrid, Spain. (Photo: DyD Fotografos/Newscom) 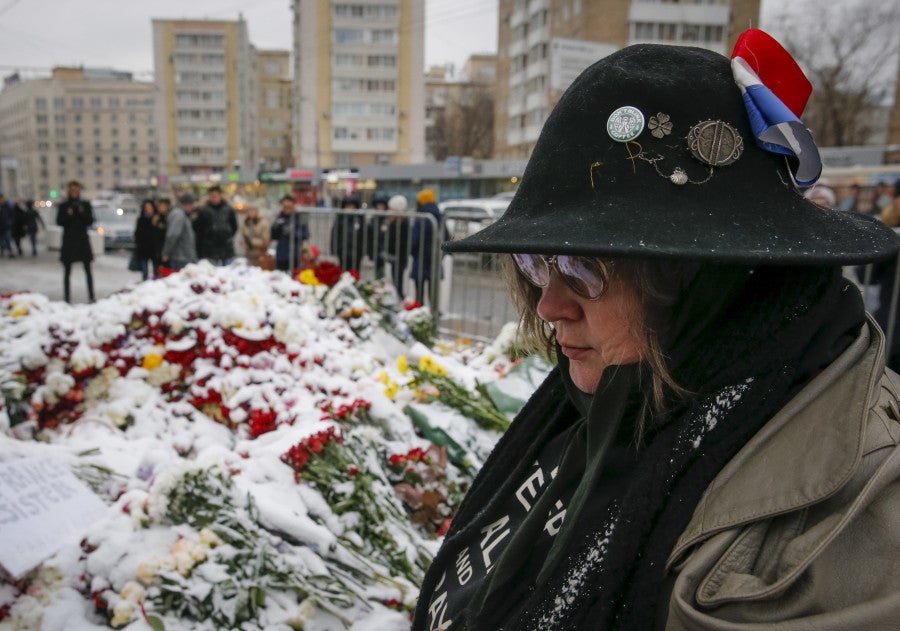 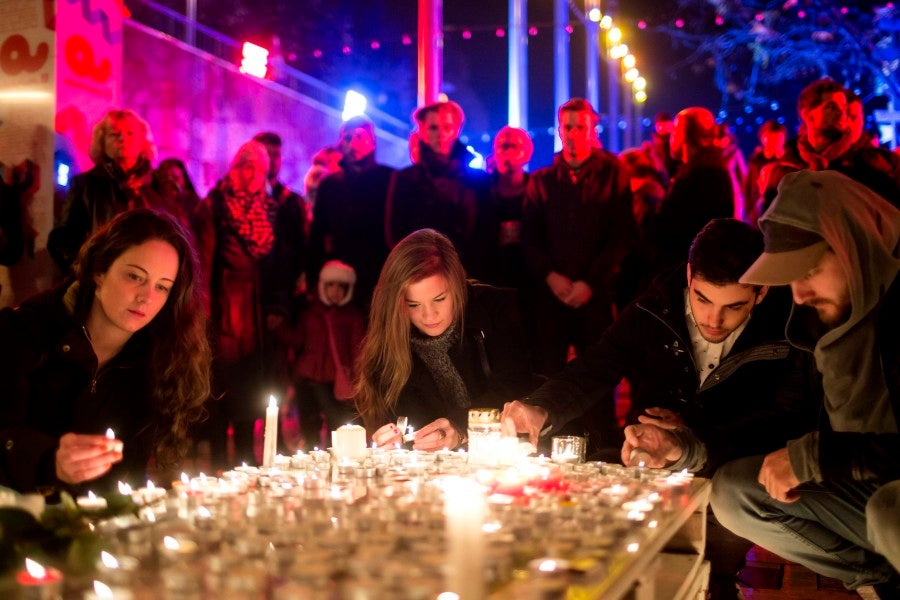