The Rise of Big Pot 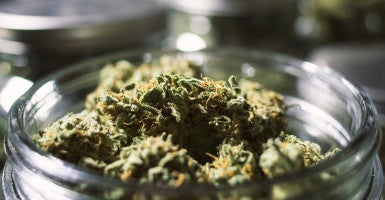 One of the most surprising results from recent state elections was Ohio voters voting overwhelmingly against Big Pot. By a nearly 2-to-1 margin, they defeated a ballot measure that would have permitted the legalization of marijuana in the Buckeye State.

Misleadingly named ResponsibleOhio, the measure would have allowed the commercial production, retail sale, and personal use of marijuana. Yet despite Big Pot’s $25-million cash infusion into the effort, voters rejected the spin that marijuana legalization is safe or in the best interest of citizens.

Voters would be wise to watch the disasters unfolding in Colorado and Washington state. Both legalized pot a couple years ago with the promise that pot tax money would bring tax revenue increases and better-educated children.

The negative side effects of marijuana in Colorado are real. Recent federally funded reports show that:

And as I have written about before, pot-positive traffic fatalities doubled between 2007 and 2012, a trend that’s continued to this day.

Big Pot—the next Big Tobacco—peddles the notion that by legalizing pot, the black market for the drug dries up. That’s not what has happened, as I predicted long ago. State pot stores charge more than black marketers, who don’t have to pass the cost of the tax onto willing customers.

So the black market, composed of criminal gangs and cartels, thrives. Even pot smokers can figure out that you can buy cheaper dope from the unlicensed seller than from the state-sanctioned store.

And when Big Pot pushes high-potency pot products such as marijuana gummies, candy, and soda, as they do in Colorado and Washington State, you start to realize that they are marketing a highly addictive product to children. Sound familiar?

The bad news isn’t confined to the states with risky legalization schemes. According to a report released by the Governors Highway Safety Association, the legalization of marijuana and quadrupling in the use of prescriptions drugs since 1999 have resulted in increasing threats to road safety nationwide. Almost 40 percent of fatally injured drivers tested positive for drugs, which rivals the numbers of drivers who died with alcohol in their systems.

The recent findings by the Journal of Addiction from Kings College London show that marijuana is highly addictive, causes mental health problems, and is a gateway drug to other illegal and dangerous drugs. That report also found that regular adolescent marijuana users don’t go as far in school as their non-using peers, that they were more likely to use other illegal drugs, that pot use produced intellectual impairment, that its use doubled the risk of being diagnosed with schizophrenia, and that it increased the risk of heart attacks in middle-aged adults.

There is a reason the American Medical Association, the American Lung Association, and other reputable medical associations and professionals oppose legalizing marijuana. Even The Washington Post urged D.C. residents to vote against a legalization ballot initiative in 2014, saying that marijuana is not harmless and that voters should see how things turn out in Colorado.

Ohio voters were wise to reject Big Pot’s slick lobby campaign. If only voters in other states had the common sense of the Buckeye State.