This Aide Doesn’t Want Senate Filibuster Rules to Change. Will He Convince Paul Ryan to Stay Out of It? 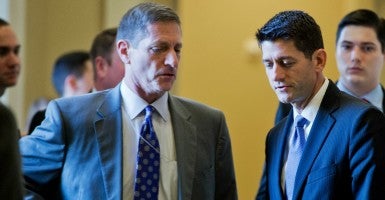 Republicans in the U.S. Senate who are taking aim at filibuster rules in the upper chamber won’t find an ally in House Speaker Paul Ryan, if the speaker’s new chief of staff has his way.

Although Ryan, R-Wis., has been silent on the issue since assuming the speakership Oct. 29, top aide David Hoppe consistently and publicly has held the line against efforts to change the Senate’s filibuster rules.

A veteran of Capitol Hill and personal friend of Ryan’s, Hoppe argues that proposed reforms would squash minority rights and trample Senate tradition.

In a letter to the Wall Street Journal earlier this year, Hoppe warned that filibuster reform would place “simple majority-rule power in the hands of one party in the Senate and will change the federal legislature forever, and for the worse.”

>>>  Commentary: Why Getting Rid of the Filibuster Is a Bad Idea

Although the House speaker cannot change Senate rules, Ryan could exercise influence over members in the upper chamber.

At issue is the Senate’s process for passing legislation. A growing number of Republican senators are frustrated with Democrats’ ability to filibuster bills keeping legislation from coming to the floor and up for a vote.

Senate rules require 60 votes in the 100-member Senate to invoke cloture and begin debate on spending measures. Since becoming the minority party in January, Democrats have regularly deployed the filibuster as leverage during budget fights to secure concessions.

Some frustrated Republicans are eyeing the “nuclear option” to bypass and disarm the filibuster. A parliamentary tactic, the nuclear option allows for the suspension of Senate rules and passage of measures by a simple majority of 51 instead of 60 votes.

The last time the Senate “went nuclear,” Democrats controlled the chamber. In 2013, Majority Leader Harry Reid, D-Nev., employed the nuclear option to force through President Obama’s judicial nominees by a simple majority vote. Republicans criticized the move, including Hoppe, then a senior adviser at the Bipartisan Policy Center, a nonpartisan D.C. think tank.

In a 2014 National Review column, Hoppe criticized Reid for ignoring “regular-order mechanisms” as majority leader and choosing “the nuclear option—and the power that went with it.” He wrote:

Hoppe’s defense of the filibuster has been consistent through election cycles. In 2005, Senate Republicans floated the idea of going to the nuclear option when Democrats began filibustering President George W. Bush’s circuit court nominees.

Then working for the lobbyist group Quinn Gillespie and Associates, Hoppe warned of the potential fallout during an April 2005 appearance on PBS’s “National Journal Editorial Report.”

“Say a president seven, eight years in the future decides that his national health care program just has to be done,” Hoppe said. “And they’ve got the might to make right of 51 senators. Should they get rid of the filibuster on legislative items? That’s the way we’re headed here if we do it this way.”

Although the House speaker cannot change Senate rules, Ryan could exercise influence over members in the upper chamber.

“I actually attended their policy lunch this last Tuesday,” Ryan told reporters, adding that he had invited McConnell, who took the reins of majority leader from Reid in January, to address the House Republican Conference.

Ryan also worked with two vocal opponents of the current filibuster rules, Sens. Steve Daines, R-Mont., and Tim Scott, R-S.C., when they served in the House.

A Ryan spokeswoman declined to comment on whether Hoppe’s opinion was consistent with the speaker’s views, saying only that Ryan “is focused on opening up the process in the House and returning to regular order.”

But there is little doubt that Hoppe will wield considerable influence as Ryan’s chief of staff. Both men are from Wisconsin and share similar political views. They both were disciples of the late Republican star Jack Kemp, who served as secretary of the Department of Housing and Urban Development after representing New York in the House from 1971 through 1988.

Ryan called Hoppe a conservative “foot soldier” and “a good friend” when he announced his pick for the position.

“His decades of experience fighting for the cause and his passionate commitment to conservative principles are just what I’m looking for to create a new kind of speakership,” Ryan said.