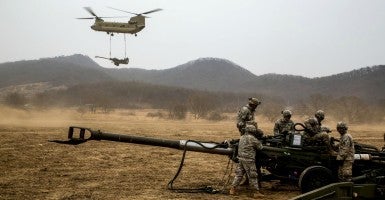 The world’s an even scarier place than it was last year. From the Middle East to the South China Sea, the bad guys have grown stronger and bolder. Meanwhile, our allies and friends—suffering from economies much weaker than ours—are spending less and less on defense.

This means less help available to us, if things go from bad to worse. And U.S. troops will be even more hard-pressed to prevail, since our own military spending has been slashed 15 percent over the last four years. As trend lines go, these are deeply worrisome.

The world changes, whether we want it to or not. Last year, the Islamic State was just “a JV team” in the eyes of President Barack Obama. Today, the brutal Islamist group controls a third of the territory in two countries and commands a mobile light infantry army.

Russia began 2014 by flexing its muscles in its so-called near abroad, occupying Crimea and, later, invading Ukraine. Now Putin has pivoted to the Middle East, committing aircraft, missiles, tanks, and troops to preserve the terror-sponsoring regime of Syrian strongman Bashar Assad—one of the leading human rights abusers of the 21st century. Moscow’s initial attacks in Syria seem largely directed against U.S.-backed Syrian rebels rather than the Islamic State.

In 2014, China periodically “pushed” on American friends such as Japan, South Korea, and the Philippines. Now Beijing has built artificial islands across the South China Sea and demanded that everyone stay out of its newly expanded territorial waters.

Also last year, Iran was desperate to negotiate for some sanctions relief. Now they’re reaping a windfall: $150 billion in released funds, the removal of all restrictions on their conventional military programs (including ballistic missile technologies) and the prospect of resuming their nuclear weapons program in 15 years (or less, if they decide not to play by the rules—again).

The Obama administration’s persistently weak responses to provocation have only encouraged more aggressive behavior by our adversaries. And it’s led our friends to become increasingly dubious about whether America will truly come to their aid should a crisis come.

They’ve seen the U.S. withdraw prematurely from trouble spots. They’ve seen Washington cut troop and military spending year after year. And they know that our Western allies, still caught in the economic doldrums, are less able to provide the kind of force and facilities America has long relied on for support.

Friends who have counted on America to have their backs are now looking over their shoulders and seeing no one there. As a result, Japan is considering developing an independent nuclear capability. The Sunni Gulf States are weighing what sort of weapons capabilities they should obtain to counter Iran’s new strength. The Baltic States are bracing for an invasion; their military leaders say it feels like 1938 again in their capital cities.

Amid all this growing instability, readiness levels across all U.S. military services are falling. There is too little money to train properly; ranges sit idle for lack of bullets, fighter jets are parked for lack of fuel, and America has no aircraft carrier battle group in the Middle East, because we cannot get one fitted for duty. Modernization has been put on hold or drastically curtailed; basic repair of worn out equipment is the best our troops can hope for.

Beyond the budgetary difficulties, the military has suffered a series of morale-sapping slaps from the administration. Having the Justice Department investigate a bombing target incident in Afghanistan suggests that the administration mistrusts the Pentagon’s professional ethos and integrity.

And now the president has vetoed the National Defense Authorization Act, because he doesn’t want to increase defense spending unless Congress agrees to raise non-defense budget lines as well. Message to the troops: Defense of the nation is no more critical than subsidizing the sugar industry.

What is the bottom line? At a time of growing threats, when the help available from others is shrinking, the American military is now less ready to defend our national interests than it has been for decades. What is happening is extremely dangerous. We must halt—and reverse—the deterioration of U.S. armed forces.