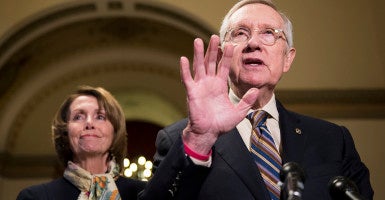 In October 2008, Congress raised the debt limit to $11.3 trillion. Then-presidential candidate Barack Obama denounced the action as “irresponsible” and “unpatriotic.”

But those were the good ol’ days, when Congress actually put a statutory limit on the debt. Seven years later, Congress has become only more fiscally irresponsible.

Today the national debt has climbed to $18.1 trillion—60 percent higher than the “unpatriotic” limit set just seven years ago. And it’s only going to get worse.

Last week, Congress passed the Bipartisan Budget Act, suspending the debt limit altogether for the fourth time in three years. What that means is that Congress has officially granted the Treasury Department unlimited borrowing authority for the rest of Obama’s final term.

Unfortunately, this budget deal doesn’t simply put on blinders when it comes to the debt. It also increases total federal spending by $85 billion over the next three years, blowing through the caps established in 2011 by the Budget Control Act.

About half of that new spending won’t be paid for until 2025—seven years after the money’s gone out—and that’s assuming lawmakers stick with the “revenue enhancers” called for in the bill. Whether they do or not, the deal guarantees that taxpayers will take on billions in additional debt.

How can you make a bad deal worse? Well, one way was is to turn emergency war funding into a slush fund for domestic programs. And that’s what this deal does, siphoning almost $16 billion in war funding into nondefense agencies like the State Department and Homeland Security over the next two years.

That money is likely to be used to bankroll programs typically covered through normal appropriations, thus freeing up that amount to be spent on domestic programs.

This kind of irresponsibility will have devastating consequences. Earlier this year, the Congressional Budget Office warned that if Congress stuck with the discretionary spending caps for the next 10 years while allowing entitlement spending (on programs like Medicare, Medicaid, and Social Security) to continue on autopilot, the debt would grow by more than $7 trillion. The office also warned that “the rising debt could not be sustained indefinitely; the government’s creditors would eventually begin to doubt its ability to cut spending or raise revenues by enough to pay its debt obligations, forcing the government to pay much higher interest rates to borrow money.”

Since putting limits on discretionary spending four years ago, lawmakers have broken the caps twice. In the process, they increased discretionary spending by a total of $143 billion by 2021 (the period covered by the Budget Control Act) and promised to pay for it with $98 billion in savings that aren’t even scheduled to appear until after 2021. Continually delaying reforms in exchange for more spending today is a recipe for going broke.

The country is in desperate need of responsible leadership. Without significant fiscal reforms, we will soon be spending more on annual interest payments than on national defense and other priorities. America simply cannot afford more deals like this one.