Memo to Congress: True Patriotism Is Axing Taxes to Keep Companies in U.S. 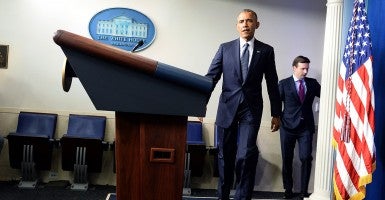 The Obama administration announced new rules this week that will effectively punish American companies who move facilities and jobs overseas to save on taxes. Labor union backed groups have denounced American businesses that move offshore to avoid the 35 percent corporate tax as “unpatriotic.” The White House claims such moves cost the Treasury billions of dollars.

But how are such moves unpatriotic? Is it wrong for businesses to try to reduce their tax burden? Business CEOs have a duty to their shareholders to lower their costs and increase their profits. This may come as a shocker to Washington, but companies are in business to make profits.

For many years liberals have insisted that tax rates don’t matter, arguing that businesses and workers and investors don’t make economic decisions based on taxes. But the events of recent months and years show that’s simply not true. Nearly every week recently, businesses have announced locational decisions explicitly based on taxes. In a process called “inversion”, roughly 50 major companies have moved abroad to lower their corporate tax burden over the last 10 years, according to the Congressional Research Service — and the trend is accelerating. Pharmaceutical firm Pfizer has been flirting with moving to Europe, as has medical firm Medtronic. Even iconic American retailer Walgreens is exploring a move overseas.

The problem, in a nutshell, is that the U.S. corporate income tax rate is the highest in the industrial world. Our tax rate is 35 percent plus an average of more than 5 percent added at the state level. The chart shows that while 25 years ago we were near the international average, we are now roughly 15 percentage points above the average because other nations have slashed business taxes. If tax rates didn’t matter, liberals wouldn’t need to impose new rules to stop businesses from fleeing high taxes. But they are clearly nervous about this trend of firms moving to lower tax nations like Ireland. Ireland is now a popular destination because its tax rate is just 12.5 percent. Treasury Secretary Jacob Lew wrote to Congress this week urging lawmakers to “shut down this abuse of our tax system.”

But blaming the businesses for moving is senseless. It’s like asking the water to stop falling down Niagara Falls.

The problem is easily fixable, but not the way President Obama proposes. He wants to tax earnings overseas at the U.S. rate so they have less of an incentive to move out. There’s just one problem: this policy would depress the number of multinational companies incorporated in the United States. After all, if two firms are located in Ireland producing steel or cars, and one pays the 12.5 percent Ireland tax rate and the other pays the Irish rate plus 25 percent more, which business will be more profitable and competitive?

Which is more likely to survive? Come on Mr. Lew, you can do this math. It is, as Obama would put it,”simple math.”

The obvious solution is to cut the U.S. business tax to the international average, right now. This would stop the bleeding. This wouldn’t cost the Treasury much money because companies would stay put. To the extent the corporate income tax reduction has to be “paid for,” get rid of corporate welfare programs like the Export-Import Bank.

The politicians who defend a tax system that exports American jobs overseas have the real “patriotism problem.” They refuse to fix it – even as U.S. workers lose out, with fewer jobs available and lower wages. I flat out hate it when American jobs are shipped overseas. With the right tax system, like a flat tax, companies would be moving here. That would be good economics — and patriotic.