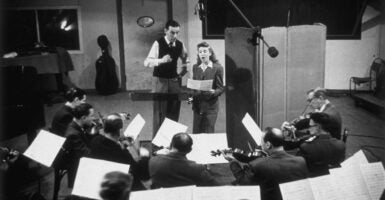 Ronald Reagan once lamented that those who shape pop culture no longer promote patriotism. But in World War II, pop culture, particularly music, was very much meant to inspire love for country. Pictured: Vera Lynn, whose music uplifted Allied troops during the war, sings with an orchestra for a broadcast in this photo dated 1945. (Photo: Kurt Hutton/Picture Post/Hulton Archive/Getty Images)

Ronald Reagan once said, “Younger parents aren’t sure that an ambivalent appreciation of America is the right thing to teach modern children. And as for those who create the popular culture, well-grounded patriotism is no longer the style.”

His concern about trends in the popular culture of the time were warranted, and we should be concerned about similar trends in our time.

We see these trends through the critical race theory agenda, when we hear outrageous claims combating our nation’s integrity, calling for a new American flag.

We see an indifference to patriotism from the highest levels, like when Vice President Kamala Harris tweeted, “Enjoy the long weekend,” the Friday before Memorial Day—apparently oblivious to the fact that the “long weekend” was meant to remind us of the sacrifices our fellow Americans have made in war to give us the freedom we have to enjoy such a weekend.

With critical race theory infesting our pop culture today like cicadas, it appears that Reagan was right all along: Patriotism is no longer in style. Throughout history, music remains the driving force in influencing culture. During the 1930s and 1940s, pop culture revolved to unite and encourage Americans in common purpose to a shared goal: freedom.

After the Japanese attacked Pearl Harbor, forcing the United States to finally engage in World War II, anthems inspired Americans at home and overseas to take down the evils of Nazism and fascism and to support the boys fighting in Europe and the Pacific.

The song “White Cliffs of Dover” by Vera Lynn was written to uplift morale when the Allies were losing the war in 1941. The white cliffs symbolize the protector of the English against its enemies, and historically was a landmark that reassured travelers that they were returning to England. The song expresses a woman’s courage throughout both world wars.

After being recorded in 1942 and reaching No. 8 on the billboard, “Praise the Lord and Pass the Ammunition” was produced by Frank Loesser in response to the Japanese attack on Pearl Harbor, lifting sailors’ spirits as they hoisted 5-inch shells weighing up to 100 pounds each with ropes into the guns on the USS New Orleans.

“Blood on the Risers,” featured in the HBO series “Band of Brothers” (among other hit shows and movies), manifests the dangers of war as a paratrooper fails to deploy his parachute after a fatal training jump. The chorus lyrics, “glory, glory, what a helluva way to die,” embody the grit and determination of our troops.

Many more patriotic anthems were composed, sung, and reproduced during World War II by such famous musicians as Louis Armstrong, Glenn Miller Orchestra, The Dorsey Brothers, Duke Ellington, and the Philadelphia Orchestra. The origins of these songs are often lost to history, but have more meaningful lyrics compared to music we see on a daily basis on social media platforms like TikTok, where instant satisfaction is more important than authenticity.

The majority of today’s top hits on Spotify and Apple Music remind us of TikTok videos of underage kids swinging their arms and thrusting their hips. No wonder songs like “WAP” become the mainstream standard.

Music is powerful; it can do more than unite. Listening to music has been proven to help patients with Parkinson’s disease or who have suffered a stroke and are on the long road to recovery. Music releases powerful emotions, some that have been buried deep or perhaps others you didn’t even know you had.

I encourage everyone to do some research to see what motivated the artists of the World War II era to produce the music that they did, and to understand the effect they had not only on Americans at that time but also on the modern history of our country. It would be a useful way, perhaps, to find your own motivation to speak out about the things you hold dear.

It may seem that we have lost our way, today, but music, and the arts in general, still have the power to capture, generate, and carry forward the powerful emotions and values that have defined America in the past and that remain essential to our future.

The music of World War II still unifies folks from all around the world. World War II was one of the most patriotic and productive periods of American music. The war is long over, but the songs live on. It makes me want to get back out on the field, brush back a batter hugging the plate too closely, and think about the wonderful place we call home.