Businesses Don’t Leave the U.S. Because of Lack of Patriotism 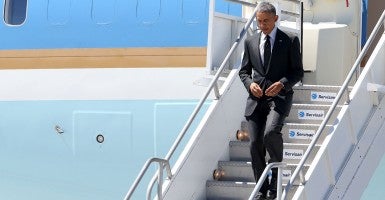 President Obama will deliver a speech today railing against corporate inversions. That is the process whereby a U.S. business merges with a foreign business and moves the new joint business’s headquarters to the foreign country. Inversions have been a hot topic recently because well-known businesses such as Walgreens, Pfizer, and Medtronic have been looking to engage in the process.

The president, like others before him, decried this practice because he believes it displays a lack of patriotism. However, inversions have nothing to do with love of country. They are all about U.S. businesses keeping up with their global competition.

When a U.S. business inverts it continues paying the same amount of tax it always has on its U.S. income. Any business, no matter where headquartered, pays the 35 percent U.S. corporate tax rate – which is the highest corporate tax rate in the world — on income earned within our borders.

The policy causing all the problems is the extra tax the U.S. levies on the income its businesses earn in foreign countries. This is known as a worldwide tax system. The U.S. is the only industrialized country that taxes the foreign earnings of its businesses.

As I explained in a recent paper:

If U.S. businesses don’t do anything to remedy this disparity, their relative profitability will fall as they take a pass on more and more growth opportunities their foreign competitors eagerly chase. Eventually this would put the viability of their businesses in jeopardy.

The preferred liberal fix to this problem is to make it harder for businesses to invert by requiring foreign shareholders to own a larger portion of a merged business (50 percent compared to 20 percent under current law) before the headquarters can be moved from the U.S. This change would only make matters worse.

Business will still find ways to remain competitive, such as by selling themselves outright to foreign competition. Raising the threshold could backfire by sending the message to businesses that the U.S. tax system will remain uncompetitive and could become more hostile to investment, causing more to want to flee our shores.

The only fix for this problem is tax reform that reduces the corporate tax rate and stops taxing the foreign income of U.S. businesses. Instead of demonizing U.S. businesses that are trying to do best by their shareholders, employees, and customers, Obama would better serve the country by spending his time working with Congress to make tax reform a reality.