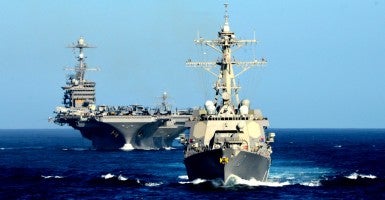 It seems fitting that the Heritage Foundation released its latest Index of U.S. Military Strength just before Halloween. It makes for some scary reading.

It’s easy to assume that our military will always be prepared to not only defend our shores, but protect our allies and interests worldwide. Indeed, to suggest otherwise might seem unnecessarily pessimistic.

But wishful thinking doesn’t keep you safe—doing the hard work to remain prepared does. You can’t do that if you don’t examine our actual state of readiness, and that’s what the editors of the 2016 edition of the index have done.

How prepared is each branch—Army, Navy, Air Force, Marines—to handle its missions? What is our nuclear capability? What are the threats we face in Asia, the Middle East, and Europe, and how can we respond to them?

The main enemy facing our military today isn’t a foreign army. It’s a domestic tool known as the Budget Control Act. It has imposed some much-needed cuts in Washington, to be sure. But it’s a blunt instrument that doesn’t differentiate between spending that’s needed and spending that’s wasteful. And the act has been pummeling our armed forces.

Start with the Army. The benchmark of U.S. military readiness has long been the ability to fight two major wars at once. (Think about the Cold War, when we were able to fight when and where needed—Korea, Vietnam, and Desert Storm—while also maintaining substantial forces in Europe and Asia capable of deterring the Soviet Union and China from destructive opportunism.) To do so, history has repeatedly shown we’d need to have 50 brigade combat teams. Today’s level: 32.

How about the Navy? Its mandate is “to be where it matters, when it matters.” Its flexibility, enabling it to project U.S. military might around the globe as circumstances warrant, undergirds much of the peace that exists in the world today. The baseline number of Navy ships that enable it to do that: 350. The number we have today: 272. Things are a bit better in the submarine department, but the number of surface combatant ships is way down.

Next up—quite literally—is the Air Force. Of course, it’s hard to go up when you’re losing aircraft and the ones you have left are rapidly aging. Unlike some other branches, the Air Force didn’t grow in the wake of Sept. 11, 2001. It got older as 14 years of continuous operations used up the life of its aircraft without their timely replacement.

Thanks to the Budget Control Act, the Air Force is set to shrink to 26 tactical aircraft squadrons, compared to 133 active fighter squadrons during Operation Desert Storm. And there’s not enough money to keep even those 26 at acceptable levels of readiness.

And then we have the Marines, which also play a crucial role in U.S. military engagements. Even with force levels declining in Afghanistan, for example, we’ll be maintaining 9,800 troops there this year to support our mission, and the Marines will make up a portion of those troops.

Under the two-war benchmark, we should have 36 battalions of Marines. Instead, we have 23. And the Marines that make up those battalions are in a near constant state of deployment.

There are many more details in the 2016 Index of Military Strength. Particularly valuable is the section on “Threats to U.S. Vital Interests.” Broken out by region, the editors examine the military capabilities of Russia, Iran, and China, among others.

What is the state of Middle East oil transit chokepoints? What missiles does Iraq have, and what’s their range? How many nuclear arsenals are there today, and where are they located? The index has well-documented answers to these and many other questions.

“The consistent decline in funding and the consequent shrinking of the force have placed it under significant pressure,” the editors conclude. “The cumulative effect of these factors has resulted in a U.S. military that is marginally able to meet the demands of defending America’s vital national interests.”

“Marginally able”? This is unacceptable. Every concerned citizen should ask Congress, the president, and those running for office, “What are you doing to rebuild our military and make us fully capable of defending our country?”