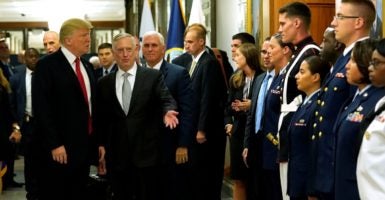 Some House Republicans are taking another shot at blocking funding for gender transition surgeries in the military, projected to cost about $3.7 billion over the next decade.

“We are $20 trillion in debt and the taxpayers … are projected to spend $3.7 billion in the next 10 years for sex-reassignment surgeries,” @RepScottPerry says.

Earlier this month, 23 House Republicans joined Democrats to defeat an amendment by Rep. Vicky Hartzler, R-Mo., to block the funding for transgender treatments in the National Defense Authorization Act, or NDAA. The NDAA sets priorities for military spending.

The military budget is already strained, said Thomas Spoehr, director of the Center for National Defense at The Heritage Foundation.

Spoehr, a retired Army lieutenant general, recalled one enlistee diagnosed with asthma who would need an inhaler. Even though he wanted to serve, he couldn’t.

“We don’t permit others to join the military if we know they will require future medical treatment,” Spoehr told The Daily Signal. “I don’t know why it would be different here.”

However, Spoehr said he wouldn’t want to delay the entire appropriations bill.

“I don’t want to see a continuing resolution,” Spoehr said. “I hope Congress can do the right thing and pass the bill and pass the amendment.”

Rep. Scott Perry, R-Pa., has offered an amendment to the “Make America Safe Act,” which could be voted on this week. This is the Defense Department appropriations bill that essentially funds the NDAA priorities.

Dan Holler, vice president of communications and government relations at Heritage Action for America, said Heritage Action supports the Perry amendment, but doesn’t yet have a position on the larger bill.

Heritage Action previously endorsed the Hartzler amendment to the NDAA.

Secretary of Defense James Mattis delayed admitting new, openly transgender military members until after Jan. 1, when the matter can be reviewed. The NDAA looks ahead at funding priorities for the next decade.

“The Trump Department of Defense should not be protecting the radical social agenda of the Obama administration,” Family Research Council President Tony Perkins told The Daily Signal in a phone interview.

Perkins noted that Republicans are definitely not opposed to increased military funding, but want the money to be used wisely.

Perkins said conservatives are willing to block the “Make America Safe Act,” which would boost military funding by $80 billion, if it’s clear the military wouldn’t be spending the money wisely.

Some of the 23 Republicans have said they voted on the advice of Defense Department officials, but Perkins noted, “It’s the prerogative of Congress. They have the purse strings.”

Obama Secretary of Defense “Ash Carter pulled the pin in this grenade. We just want the Trump Defense Department to put it back,” Perkins said, remarking that the public will put pressure on the Republicans.

The House Republicans, mostly from blue or purple states, who voted against the Hartzler amendment to the NDAA are:

“These Republicans stood up and did the right thing,” Thorn told The Daily Signal in a phone interview. “The Hartzler amendment and this amendment are discriminatory on their face because they target one group of people in the area of health care. It’s ridiculous for the Republicans to try to attempt this again.”

Speaking about the amendment on the House floor on July 14, Perry said:

Hartzler hopes to see the House pass the Perry amendment.

“Steps must be taken to address this misuse of our precious defense dollars,” Hartzler told The Daily Signal in a statement. “This policy hurts our military’s readiness and will take over a billion dollars from the Department of Defense’s budget. This is still an important issue that needs to be addressed.”

A Rasmussen poll last month found that 23 percent of likely voters support allowing openly transgender individuals to serve in the military. Another 31 percent said it’s bad for the military, while 38 percent said it would have no impact.