9 Reasons Why Obama Just Made Wrong Decision on Keystone Pipeline 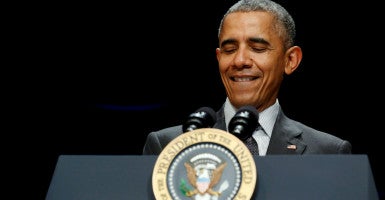 It took President Barack Obama only 2,604 days to reject the permit application for the Keystone XL pipeline.

In a statement today, Obama said the pipeline “would not serve the national interest of the United States.”

“America is now a global leader when it comes to taking serious action to fight climate change,” Obama added. “And frankly, approving this project would have undercut that global leadership.”

Former Obama administration Secretary of Energy Stephen Chu hit the nail on the head: “The decision on whether the construction should happen was a political one and not a scientific one.”

Here are the top nine reasons Obama is wrong on Keystone XL.

Last April, the Washington Post slammed the Obama administration’s continued delay of a Keystone XL decision, calling it “absurd” and “embarrassing.” Rejecting the permit application is even more absurd and more embarrassing.