Why LGBT Advocates Think They Lost in Houston Election 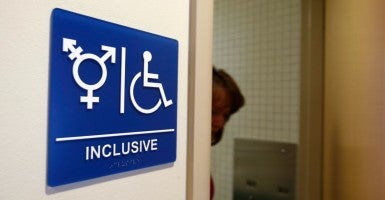 Failing to pass the Houston Equal Rights Protection Ordinance Tuesday night came as a blow to LGBT advocates, who have won recent victories at the U.S. Supreme Court and beyond.

“We are disappointed with today’s outcome,” said a coalition of partners that make up Houston Unites, the group behind the sexual orientation and gender identity measure. “We’ve learned some important lessons, as well.”

On Wednesday, members of the campaign and LGBT supporters shared some of those lessons, dissecting what went wrong in Houston, which voted for President Barack Obama in 2012 and 2008, and how they can prevent it from happening again.

Houston, We Have a Problem

The biggest hurdle LGBT groups say they failed to overcome was the branding of the Houston Equal Rights Protection Ordinance as “the bathroom bill.”

Dominic Holden, a BuzzFeed news reporter, spoke to people on the ground before the vote who appeared to be under the impression that bill was entirely about bathrooms.

“Bathrooms are the hot-ticket item—that’s what everybody is talking about,” Cory Alters, a Houston resident, told BuzzFeed. “I don’t want girls in my bathroom, and girls don’t want guys in their bathroom.”

The Houston Equal Rights Protection Ordinance (HERO) would have created legal protections in 15 categories. Sexual orientation and gender identity were two of those categories.

Opponents focused on that angle, branding HERO as a “bathroom bill.” Their fear was that the inclusion of sexual identity could allow persons with biological male bodies who identify as women to use women’s bathrooms, locker rooms, and other sex-specific facilities, without having legally changed their names or undergone surgery or hormone treatment.

While the bathroom aspect was an important concern to many opposing the measure, another issue at stake was whether HERO could hinder people’s ability to live in accordance with their religious and moral beliefs about marriage and sexuality. The Houston measure, wrote The Heritage Foundation’s Ryan T. Anderson, an expert on marriage, was “modelled on other [sexual orientation and gender identity laws that have been used to penalize bakers, florists, photographers, schools, and adoption agencies.”

But bathrooms were what stuck, and opponents admit having a difficult time overcoming that narrative.

“Trying to convince the general public is an (expensive) fool’s errand,” wrote Brynn Tanehill of the LGBT military organization SPARTA on Tuesday night.

In her article, she called for a “new, science based strategy” to “win” transgender issues. Instead of relying on voters, Tanehill called on the LGBT movement to focus their efforts on unelected officials.

“Convincing large numbers of people driven by fear and religious beliefs simply will not happen,” Tanehill wrote. “And 99 times out of 100, these aren’t the people who matter.” She added:

The people who matter are policy-makers who have the ability to change the regulations which make life difficult for transgender people on a day to day basis. Bureaucrats, administrators, judges, HR benefits, directors, school superintendents, police chiefs: these are the kinds of people who need to be courted, convinced, and motivated to action.

Among the reasons for failing, the LGBT community also placed blame for failing to reach out to minority communities, such as Hispanics and blacks.

“Political strategists warned LGBT activists in the days ahead of the vote: There was little Spanish-language outreach, no big ad buy in Spanish-language media—in a city that is 44 percent Hispanic—countering the lies of the opposition, who’d certainly been doing their own outreach,” wrote Michelangelo Signorile, Gay Voices editor-at-large for The Huffington Post.

Signorile called the campaign, which was run by the Washington, D.C.-based Human Rights Campaign, too “top-down” and “elite.” He wrote:

LGBT rights activists spent 3 million to 4 million dollars — while opponents spent about a million dollars — bringing in people like Sally Field to make appeals, and using other Hollywood celebrities in ads. They got President Obama and Hillary Clinton to speak out, and thought that was going to clinch it. It had the feel to many of a top-down, elite campaign — outsiders swooping in to tell Houston what is good for it — instead of being deeply embedded on the ground, in the communities that were voting, including in their media, where the opposition surely was doing their dirty work.

Others, via social media, chimed in on why they believed that the effort fell short. Some echoed experts who blamed the loss on a general lack of grassroots organization, while others suggested that transgender rights are better off separated from those of lesbians, gays, and bisexuals.

“Without question this loss is because to an organization we have forgotten how to fight at a grass roots level,” wrote one user of a message board hosted by Human Rights Campaign. “The ‘soft’ approach works in some cases, but when our opponents get the ‘hot button’ approach working, a well reasoned argument will not win.”

“Many people support LGB rights,” speculated a different user on the same board. “The problem is the [t]ransgender community clinging onto ours to get their own rights, which is, and it’s been documented, hurting gay people. Most people do not understand or support transgender beliefs, and it is the number one reason we are being held back.”

How the Other Side Says They Won

Similar to how LGBT analyzed why they lost, conservatives say they won by pushing both the “bathroom bill” narrative and connecting with “real people”—including minorities—on the ground.

“The bathroom bill narrative certainly helped Houstonians understand this issue because that’s an accurate description of what this ordinance would have allowed,” Jonathan Saenz, president of Texas Values, one of the central groups advocating against the measure, told The Daily Signal.

Saenz, a Hispanic, says he was “born and raised” in Houston. The people behind the HERO campaign “were clearly not,” he said.

Saenz also said Houston Mayor Annise Parker, who first introduced the measure last year, attempted to sell HERO as a “non-discrimination” effort that would help minorities yet made no effort to connect with those minorities.

“It’s just sad how dishonest their side was to try to convince people that they were passing an ordinance to protect against racial discrimination, yet they hardly did any outreach to any minority groups at their own admission. That’s shameful.”

Dave Welch, executive director of the Houston Area Pastor Council, another group that’s been fighting the ordinance for the past 18 months called the outcome a “victory of common decency.” In an email to The Daily Signal, he said:

The victory of common decency in defeating this ordinance is a reminder to pastors across the country that together and united, our voices can make a difference, even when outnumbered by a massive propaganda campaign and vastly outspent. These ordinances that are part of a national campaign of the Human Rights Campaign in their attempt to force their radical anti-faith, anti-family, anti-freedom agenda on local communities can be defeated, so we hope this encourages pastors and citizens around the country.

Ultimately, the people in Houston decided against the measure by a 62-38 margin. That margin, supporters say, is an honest reflection of the city’s values.

“What the left cannot handle is that the election results are an accurate representation of the values of this city,” Saenz said. “Faith, family, and freedom.”