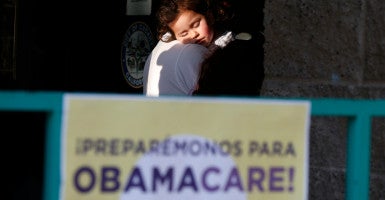 Eleven of the 23 co-ops created under Obamacare have collapsed since their inception in 2012. (Photo: Lucy Nicholson/Reuters/Newscom)

A top official with the Centers for Medicare and Medicaid Services explained today why 11 nonprofit insurance companies created under Obamacare have shut their doors, leaving more than 690,000 Americans to purchase new insurance.

During testimony before the House Ways and Means Health Subcommittee, Mandy Cohen, chief operating officer of the Centers for Medicare and Medicaid Services, told lawmakers why a number of co-ops have announced their closures in the last few weeks.

“If [consumers are] shopping in open enrollment right now, we wanted to make sure that they knew that the co-ops that remain in the marketplace were financially viable, can make it through the entire year,” Cohen said. “Our first priority was to make sure there wasn’t going to be a mid-year failure next year for any consumers. And that’s how we went about our decision-making. We played it very conservative in that way, which is why I think there’s been so much activity in the last several months.”

Since October 1, seven co-ops in Tennessee, Kentucky, Oregon, Colorado, South Carolina, Utah, and Arizona have announced they will not be selling insurance in 2016. Four more in Iowa, Louisiana, Nevada, and New York told consumers earlier this year they were shuttering.

“This is costing a lot of money,” Rep. Peter Roskam, R-Ill., said of the co-ops during the hearing. “It seems like at many levels, it’s simply a failure. It’s out of balance. … It just seems like it’s a disaster. Let’s turn the page, call it what it is, and move on.”

Obamacare’s open enrollment period began Sunday, and consumers who previously were insured through the 11 failed co-ops were told they would have to buy a new plan from a new company before their coverage ends at the end of the year. The co-ops that closed their doors directed the more than 690,000 affected consumers to federal or state-run exchanges to select new plans.

Alerting customers of impending closures before or at the start of the open enrollment period avoids consumers having to switch plans in the middle of coverage, which happened for those insured by CoOportunity Health earlier this year.

In January, Iowa’s insurance commissioner announced that CoOportunity Health, which insured residents of Iowa and Nebraska, would be shutting down. As a result, roughly 68,000 people were forced to switch plans or risk a lapse in coverage.

Under the co-op program, instituted under Obamacare, 23 nonprofit insurance companies were created. The consumer-operated and oriented plans, or co-ops, received more than $2.4 billion in startup and solvency loans from the federal government.

Since their inception—co-ops began selling plans when Obamacare was implemented in 2013—11 of the 23 co-ops insuring more than 690,000 consumers have shuttered. Together, the nonprofit insurers received more than $1.1 billion.

At issue for several Republican lawmakers was whether the taxpayer-funded loans directed toward the co-ops would be repaid.

Cohen said that the Centers for Medicare and Medicaid Services was in the process of recovering the money awarded to the nonprofit insurance companies but admitted he wasn’t certain the $1.1 billion would be recouped.

“Obviously that money went to provide coverage to Americans over the past two years, so we know all dollars won’t come back to us. But we will be using all tools available to recover any unspent taxpayer dollars,” Cohen said.

“We still have tools at our disposal to recover the funding, as well as that money went to pay claims and coverage from Americans over the last several years,” she continued.

Though co-ops in other sectors have been successful, Rep. Diane Black, R-Tenn., said those operating under Obamacare are different in that they have relied on taxpayer dollars to succeed.

“The reason why they work [in other sectors] is because everyone has skin in the game. It’s not taxpayer dollars. It doesn’t come from some dropping of dollars out of the sky,” she said. “It works because everybody that’s in it has something in the skin of the game. Here we have taxpayer dollars to the point of $2.4 billion, and that’s a real concern.”

The Ways and Means subcommittee hearing on the co-ops is the first to be held this week. The Energy and Commerce Oversight and Investigations Subcommittee will also look at the program later this week.