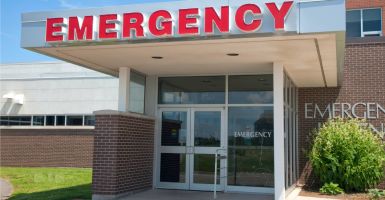 A majority of physicians report that they have seen an increase in emergency visits since Obamacare went into effect, according to a new poll by the American College of Emergency Physicians.

According to the poll, 28 percent of respondents reported that the number of emergency room patients has “increased greatly,” and 47 percent responded that they have “increased slightly” since Obamacare went into effect on January 1, 2014.

Fifty-six percent of respondents said that the number of patients using Medicaid has increased.

In a statement, Dr. Michael Gerardi, the president of the American College of Emergency Physicians, said that “hospitals are hurting.”

“America has severe primary care physician shortages, and many physicians will not accept Medicaid patients because Medicaid pays so inadequately,” Gerardi said. “Just because people have health insurance does not mean they have access to timely medical care.”

Gerardi also praised emergency rooms as a “model of medicine that people need.”

“It’s the only place that’s open 24/7, and we never turn anyone away,” said Gerardi.

Dr. John O’Shea, a practicing physician and a senior fellow at The Heritage Foundation, said that the results of the poll “should come as no surprise.”

O’Shea said that “a pillar of the Affordable Care Act” is “forcing everybody into Medicaid and calling it a solution,” despite inherent availability problems with the program.

As a result, patients with conditions that could be treated by their primary care physician are forced to go to the emergency room because their physician is overbooked. These patients also often return to the ER for any subsequent follow-up appointments.

“I’ve seen it personally,” said O’Shea. “I’ve seen patients who come into the ER because their primary care physician couldn’t see them for weeks or months.”

Ed Haislmaier, a senior research fellow at The Heritage Foundation, said that the poll, while anecdotal, is “not inconsistent with administrative data.”

Haislmaier added that data has shown that when Medicaid is expanded ER visits increase.

According to a press release, the poll surveyed 2,099 doctors nationwide.