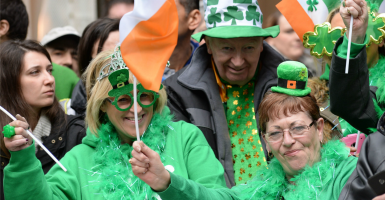 Is multiculturalism a decent if banal posture that basically boils down to respecting other cultures and getting sloshed on St. Patrick’s Day and Cinco de Mayo? Or is it a much darker social model used as a Trojan horse to transform Western society fundamentally, especially this one?

I think both can be true, but I worry only about the the fundamental transformation part. Bryan Caplan seems to think it’s only about the respect part and doesn’t think we should worry.

After we both appeared at a panel over the weekend,  Caplan, a professor of economics at George Mason University and a senior scholar at the Mercatus Center, penned a blog post in which he said he “didn’t strongly disagree with anything” I said.

He wanted to add, however, that we could stand to borrow good ideas from elsewhere, and that in the end, multiculturalism won’t have much of an impact.

Obviously, America can absorb good ideas. That was the whole thing about the “melting pot”—remember that?

As my colleague Hans von Spakovsky never tires of saying, we are a multi-ethnic society, but one with a unique American culture. That is what multiculturalists want to change.

In my talk, I underlined the point that another friend, Niger Innis, always makes: Even if we were to shut the immigration doors completely, the next president will have to start reversing the social engineering of the past five decades.

If he or she doesn’t, we will end up with another country, and not a better one. Bryan Caplan is a nice guy, but he’s wrong; multiculturalism is taking root and reordering society.

It is there in small ways. For example, when the principal at a San Francisco middle school cancels the student government election because too many white students won—and cluelessly defends abrogating the student’s choice by saying, “I want to make sure the voices are all heard!”

It is also there when Salon writes the umpteenth brainless blog post (of the morning) decrying how there are not sufficient cast members of this group or that on any given TV show.

The whole new environment has left Peggy Noonan pining for Joe Biden, because the vice president reminds her of Democrats of old.

Those Democrats “did not spend their time endlessly accusing people of being sexist-racist-homophobic-gender-biased persons of unchecked privilege,” Noonan writes. “They would have thought that impolite.”

On a bigger, more draconian level, multiculturalism ends one of our universities’ core missions, truth discovery, by closing students’ minds to other viewpoints.

And at its worst, multiculturalism is a blueprint for replacing the American narrative with a counter-narrative formed by values of the left such as income redistribution, reliance on government to apportion participation in society, and thinking of people as groups rather than as individuals and their families.

Perniciously, multiculturalism builds on the works of Marxist European thinkers such as Herbert Marcuse and Antonio Gramsci, whose “Critical Theory” has greatly influenced American progressives.

As my colleague John Fonte and I wrote recently in The Weekly Standard, multiculturalism inherits from Critical Theory the idea that society is “divided along racial, ethnic, and gender lines into a dominant group (white males) and ‘marginalized’ groups (ethnic, racial, linguistic, and sexual minorities). The goal of politics should be first to ‘delegitimize’ the ideas of the American system and second, to transfer power from the dominant group to the ‘oppressed’ groups.”

Gramsci himself was crystal-clear on this: “In the new order, Socialism will triumph by first capturing the culture via infiltration of schools, universities, churches and the media by transforming the consciousness of society.”

Multiculturalism has corrupted our vocabulary: The term “minorities” no longer applies to groups with ideas that must be constitutionally protected, as Madison worried, but to ethnic background. The word “communities” has become a functional abstraction (“the Puerto Rican community”) rather than a physical place with neighbors, churches, stores, and a bowling league.

Multiculturalism is, thus, precisely what Peter Thiel and David Sacks say it is in “The Diversity Myth,” their 1995 book: a “word game” that has allowed Marxists to succeed, where “an honest discussion would not lead to results that fit the desired agenda.”

And it succeeds because progressive multiculturalists incessantly have told immigrant groups that they need the government to protect them from native privilege. So, yeah, we are increasingly a nation of groups. That can lead to a fragmented culture and country, with dangerous long-term effects on our stability.

You know things are bad when Obama’s own pollster, Cornell Belcher at Harvard University, is urgently warning that we have self-segregated into a “Tribal America.”

“I think you will see our politics, our legislative bodies come to a complete halt, more so than they already have, if we don’t solve for this problem, if we can’t solve for the tribalism in our politics and be one big tribe and not several separate smaller tribes,” Belcher said.

I don’t mind celebrating St. Patrick’s Day or Cinco de Mayo, especially if the food will be Mexican and the beer Irish on both occasions. But we’re talking about something much bigger here, Mr. Caplan. The next president should take heed.