The Boehner-Obama Budget Deal Is Unacceptable. Congress Should Wait Until New Speaker Chosen. 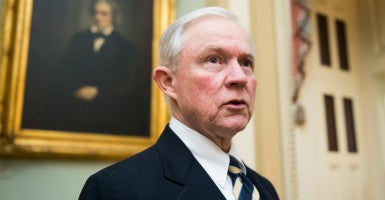 Sen. Jeff Sessions released a statement Tuesday calling for the vote on the debt deal to be canceled, saying "Republicans should insist that any vote on spending caps or the debt ceiling be delayed until the House has chosen a new speaker." (Photo: Bill Clark/CQ Roll Call/Newscom)

Once again, a massive deal, crafted in secret, unveiled at the 11th hour, is being rushed through Congress under threat of panic. Once again, we have waited until an artificial deadline to force through that which our voters oppose.

At its core, this deal with President Barack Obama does two things: First, it lifts federal spending caps for the next two years—including a $40-billion increase in spending on the federal bureaucracy. Second, it waives the federal debt limit through March 2017, allowing for approximately $1.5 trillion to be added to the debt—ensuring no further conversation about our debt course or any corresponding action to alter it.

It appears this deal is built on the same principles as the Ryan-Murray budget deal from 2013.

It exchanges instant increases in federal spending for distant savings, as much as two decades down the road, that are likely to never materialize. It funds increased spending through increased revenues—violating a core budget principle by collecting more money to expand an already too large federal bureaucracy. And it trades the termination of today’s spending limits for the promise of new spending limits 10 years from now.

The spending caps in law today were pledged as part of the 2011 Budget Control Act agreement to lift the debt ceiling by $2.1 trillion. It represented a bipartisan commitment to cap spending at a fixed amount. This deal shatters that commitment by spending $80 billion more than we promised over the next two years.

The deal also uses a common gimmick where alleged savings in an entitlement program are used to boost unrelated spending in the federal bureaucracy.

Any savings found to entitlement programs faced with insolvency must be used to shore up those programs—not to surge spending somewhere else. Yet this deal claims illusory savings from Disability Insurance and increased pension insurance fees in order to boost bureaucratic budgets.

Perhaps even worse, the deal attempts to stave off the shortfall in fraud-ridden Social Security Disability by plundering from the Social Security Trust Fund for retirees. One hundred and fifty billion dollars in funds will be siphoned from Americans’ payroll retirement contributions and redirected to the mismanaged disability program.

The people want an end to wasteful Washington spending. Lifting the budget caps and raising the debt ceiling through 2017 only ensures that our ineffective bureaucracy continues its wasteful ways while momentum in Washington for debt reduction stalls out. It eliminates a powerful opportunity to advance the case for financial discipline.

The deadline is artificial and can easily be pushed back with a short-term measure if needed. Republicans should insist that any vote on spending caps or the debt ceiling be delayed until the House has chosen a new speaker—and until there has been a full conversation among our conference and, most importantly, our voters.

There is no urgency to pass a two-year deal. GOP voters are entitled to have their representatives represent them—not act as opposing counsel, urging them to capitulate to the president’s demands.

Whether it’s spending, debt, crime, immigration, or trade, it is time for us to start fighting for what our voters want—instead of demeaning their just concerns about the future of our country.