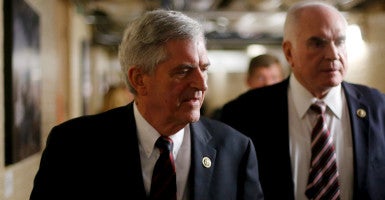 Many members of the House Freedom Caucus will vote for underdog speaker candidate Rep. Daniel Webster in a conference vote Wednesday. Still, many of those Webster supporters will vote for Rep. Paul Ryan in a more meaningful floor vote the next day. (Photo: Jonathan Ernst/Reuters/Newscom)

Despite the fact that the House Freedom Caucus is on board for Paul Ryan’s expected ascension to speaker, many members of the conservative group will vote against him in a private conference vote Wednesday.

In an attempt to be loyal to the first man who won them over, many Freedom Caucus members will vote for Rep. Daniel Webster of Florida when the House Republican Conference will pick its nominee for speaker in a secret ballot.

The move to stick by Webster, which could come from at least 80 percent of the group, is inconsequential in that a supermajority of the Freedom Caucus will eventually pledge allegiance to Ryan on the House floor once he is inevitably nominated speaker.

“It would be difficult to go back on an endorsement we made for an honorable man who has a good plan, so certainly in conference I plan to endorse Daniel Webster,” Rep. Mark Meadows, a Freedom Caucus board member, told The Daily Signal. “I don’t want to speak for all of them, but I would say I would be surprised if Webster didn’t get overwhelming Freedom Caucus support in conference. There is nothing he has done to say we should not still vote for him in conference.”

Earlier this month, the Freedom Caucus agreed to unite as a bloc to vote for Webster during the internal conference vote. That move helped push Majority Leader Kevin McCarthy to drop out of the speaker race before the conference vote even occurred, and for Ryan to jump in the race.

The Webster endorsement did not apply to the more important floor vote before the full House, meaning Freedom Caucus members still could have decided to vote for McCarthy.

The conference vote requires a candidate to get only a majority of Republican votes—124—to become the nominee, so even if most of the Freedom Caucus’ 40 or so members support Webster, it won’t stop Ryan from being the nominee.

Last week, a supermajority of the Freedom Caucus pledged their support to Ryan. That figure will likely stay true when members vote to elect him on the House floor Thursday.

That means Ryan will easily get the 218 votes—the majority of the full House, including Democrats—he needs to actually become speaker. And the Freedom Caucus is OK with that.

The Freedom Caucus just want to show Webster they aren’t abandoning him.

“Everything that I have seen gives me great assurances that Paul Ryan wants to empower members, the rank and file, and committees,” Meadows said.

“That is a very well and welcomed message coming from the gentleman from Wisconsin, who may indeed be our next speaker.”