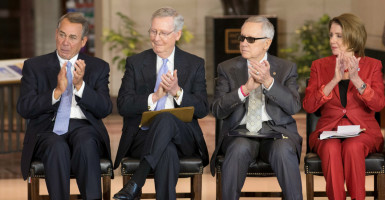 House Speaker John Boehner’s budget deal has earned him praise from the White House and congressional Democrats, but conservatives are unhappy with the package, saying the outgoing speaker “burned the barn down.”

Flanked by Republican House leadership at a press conference this morning, Boehner officially announced the deal and said he was confident that the fiscal agreement would pass this week with bipartisan support.

“This is a good deal for our troops, for our taxpayers, and for the American people,” Boehner told reporters.

And it’s a deal that’s garnered praise from the White House and top House Democrats.

“I’m pretty happy about it, because it reflects our values,” President Barack Obama said in a speech in Chicago today. “It locks in two years of funding for budgets that finally free us from this cycle of shutdown threats and last-minute patchwork fixes.”

“The bipartisan budget package unveiled last night represents real progress for hard-working families across the country,” House Minority Leader Nancy Pelosi said in a statement. “At long last, we have broken the sequester’s stranglehold for our national defense and our investments in good-paying jobs and the future of America.”

What’s in the Deal

The plan to suspend the debt limit comes just days before the Treasury Department said the government risked defaulting on its debt. Earlier this month, Treasury Secretary Jack Lew warned that Congress had until Nov. 3 to act on the debt limit.

Boehner’s budget deal, which was released last night, reallocates $150 billion from the Social Security Trust Fund to the Disability Insurance Trust Fund and limits the increase in Medicare Part B premiums to 15 percent, as opposed to the 52 percent predicted earlier this month.

Boehner, who will step down from Congress on Friday, negotiated the terms of the budget deal with Pelosi, Senate Majority Leader Mitch McConnell, and Senate Minority Leader Harry Reid.

Before leaving, Boehner said he wanted to “clean the barn” for his successor—who is likely to be Rep. Paul Ryan, R-Wis. Many believed that Boehner would move to address the debt limit before leaving Congress and raise spending caps.

“I didn’t want him to walk into a dirty barn full of you-know-what,” Boehner said. “I did my best to clean it up.”

Though Boehner said he’s confident the budget deal will pass with support from Democrats and Republicans, Ryan and many conservatives pushed back on the 11th-hour deal.

Boehner repeatedly stressed that the deal wasn’t negotiated in a manner he approved of. However, the outgoing House speaker said it was better than the alternative—passing a clean debt ceiling increase or defaulting on the government’s debt.

“I would hope that the process in the future would have a little more length to it and involve more members,” Boehner said.

Conservative members in the House and Senate expressed disapproval with the budget deal. Sen. Rand Paul, R-Ky., said he would filibuster it.

“As bad as the process that produced this budget deal was, the policy is arguably worse,” Sen. Mike Lee, R-Utah, said in a statement to The Daily Signal. “We’re constantly told that raising the debt limit doesn’t actually increase any spending, but according to the Congressional Budget Office that is exactly what this bill does. Worse, it raids $150 billion from the Social Security Trust Fund, again delays entitlement spending cuts, and sells off part of the Strategic Petroleum Reserve at a time of historically low oil prices.

Rep. Marlin Stutzman, R-Ind., told The Daily Signal Boehner’s attempt to clean the barn is “like cleaning out one pen and throwing it out into another one.” The Indiana congressman added that a vote for the bill isn’t “for the status quo. They’re actually making things worse.”

While Stutzman said responsibility for the budget “lies ultimately at the feet of the president,” he said he wishes the Republican-controlled Congress would’ve done more to achieve a better deal.

“Even though John Boehner says the process stinks, he’s still the third most powerful person in Washington,” Stutzman said. “So don’t let the process dictate what’s going to pass.”

Rep. Ken Buck, R-Colo., echoed conservative criticism of the plan, adding that Boehner has “burned down the barn.”

Buck told The Daily Signal that both chambers were “willing and able to work on appropriations bills” and voiced frustration that “instead we get two members of the House, the speaker and minority leader, two member of the Senate, and the president negotiating a deal.”

“That’s just not the way it’s supposed to work,” he said.

Rep. Mark Meadows, R-N.C., specifically spoke out against the reallocation of money from the Social Security Trust Fund to the Disability Trust Fund and said moving this money reflects negatively on Republicans’ ability to reform entitlements down the road.

“I haven’t seen all the details but have seen moving money from the Social Security Trust Fund to the Disability Trust Fund,” he told The Daily Signal. “Reprogramming to me is not reform. If we puff our chest based on these kinds of reforms, we won’t have the intestinal fortitude needed to save Social Security and Medicare in years to come.”

In an interview with The Daily Signal, Rep. Reid Ribble, R-Wis., contended that the bill contains both good and bad provisions, but he said its fate was decided long before the package was made public.

“They were able to get some savings but not enough to justify raising the caps by $80 billion,” Ribble said. “I don’t think this passes the test. I don’t think this could’ve played out any other way. I think it’s a fait accompli. It will pass no matter what we do.”

Josh Siegel contributed to this report.