The Lie Obama Keeps Repeating About the Poor in America 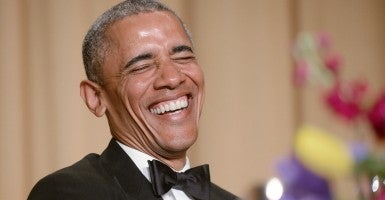 President Obama recently acknowledged what every sane person knows to be true: The best anti-poverty program is a job. Obama said this at a recent conference on poverty.

But he continues to repeat a falsehood over and over. This is the claim that the poor work just as hard as the rich do. Well, yes, many people in poor households heroically work very hard at low wages to take care of their families. No doubt about that. Yet the average poor family doesn’t work nearly as much as the rich families do. And that’s a key reason why these households are poor.

The most recent Census Bureau data on household incomes document the importance of work. Census sorts the households by income quintile, and we will label those in the highest quintile as “rich,” and those in the lowest quintile as “poor.” The average household in the top 20 percent of income have an average of almost exactly two full-time workers. The average poor family (bottom 20 percent) has just 0.4 workers. This means on average, roughly for every hour worked by those in a poor household, those in a rich household work five hours. The idea that the rich are idle bondholders who play golf or go to the spa every day while the poor toil isn’t accurate.

The finding that six out of 10 poor households have no one working at all is disturbing. Since they have no income from work, is it a surprise they are poor?

As for rich households, 75 percent have two or more workers. For the poor households, that percent is less than 5 percent.

Of course, hours worked doesn’t account for all or even most of the gap between rich and poor. But it does account for some of it. One of the more pernicious concepts is the notion of “dead-end jobs.” No, the surefire economic dead end is no job at all. There’s no climbing the economic ladder if you’re not even on the first rung.

Marriage is also a very good anti-poverty program. Married couples are almost five times more likely to be in the highest income quintile (33 percent) than in the lowest quintile (7 percent).

Without a father in the home, there is usually at most one full-time worker. Married couples are more economically successful for many reasons, not least of which is that they can and often do have two people working and bringing in a paycheck. So divorce and out-of-wedlock births have a lot to do with the income inequality. Budget expert Isabel Sawhill of the Brookings Institute found that if marriage rates were as high today as they were in 1970, about 20 percent of child poverty would be gone. What is worrisome is that a record 47 percent of Americans aged 25 to 34 have never married.

What is to be learned from all of this income data? First, one of the best ways to reduce poverty is to get people in low-income households working—and hopefully 40 hours a week. By the way, one reason raising the minimum wage won’t help lower poverty much is that it will help far fewer than half of the poor who have no job at all. And if it destroys jobs at the bottom of the skills ladder, it may lead to fewer people working and exacerbate poverty.

This data also reinforces the case for strict work requirements for all welfare benefit programs. When welfare takes the place of work it actually contributes to long-term poverty. It isn’t cold-hearted to be in favor of work programs. It is providing a GPS system to help the poor find a way out of poverty.

Finally, getting married before having kids is a great way to avoid falling into the poverty trap.