Fla. City Ordered to Pay $290K to Church, After Church Argues It Faced Discrimination From City 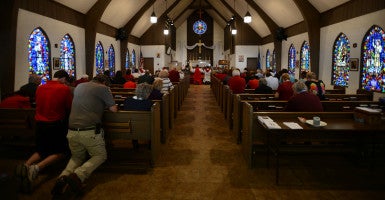 Churchgoers pause in a moment of prayer during the closing service at an Anglican church in California. After settling a lawsuit earlier this month, a church in Florida was granted approval for constructing a new building and $290,000 to cover legal fees. (Photo: Ed Crisostomo/ZUMA Press/Newscom)

In addition to approval for the new building, the city will pay $290,000 to the church to cover the legal fees incurred over the course of the lawsuit.

According to a press release from Alliance Defending Freedom, the lawsuit began after Church of Our Savior met with discrimination when it sought a permit to begin construction.

“Beginning in March 2013, the city twice denied the church a property permit because city officials said ‘the church was not consistent with the character of the neighborhood,’” said ADF.

Daniel P. Dalton of the Michigan firm Dalton & Tomich PLC said in the press release that such discrimination violated the Religious Land Use and Institutionalized Persons Act, which stipulates that “[n]o government shall impose or implement a land use regulation in a manner that treats a religious assembly or institution on less than equal terms with a nonreligious assembly or institution.”

According to Pastor David Ball, things went wrong when Church of Our Savior’s construction plans had to go before a zoning commission before the approval from the city could be made official.

“Some neighbors came [to the Zoning Commission] and complained that this might, in their estimation, cause noise and traffic,” Ball said.

Officials had a second chance to approve the church’s plans when Ball brought them before the City Council and the Zoning Commission again, after informing them that they had violated federal law by initially denying the church a permit.

Because of city officials’ refusal to grant the church a permit, and the ensuing legal battle, Jacksonville Beach taxpayers must now shoulder the cost of the legal fees accrued by the church.

Joseph Infranco, ADF senior counsel and vice president of Alliance Coordination, said this case is not the first of its kind.

“Yes, unfortunately, it’s common. The attorney who handled this case, Daniel Dalton, has probably had close to 50 cases that he has handled successfully against municipalities on behalf of churches or religious schools.”

According to Infranco, the problem of municipalities discriminating against religious institutions has been around for a long time and has yet to show signs of going away.

“It’s always been a problem, and it continues to be a problem,” Infranco said. “It was historically a problem, a reason that Congress passed the law [RLUIPA], and it remains a problem to this day.”

Infranco said the point of RLUIPA and cases like this one is one of fairness and not favor or special treatment for religious institutions.

“Just that one of the things that the law addresses, other assembly-type uses are allowed in the zoning area and one of the problems is that churches simply aren’t treated in the same way as other assembly uses, and that’s clearly unlawful,” Infranco said. “That’s one of the main things that the law addresses, where you allow similar uses and the religious institution is not allowed the same access as other similar uses.”

Now that the case has been settled with legal aid from ADF, Pastor Ball hopes that no hard feelings exist from the neighbors who complained and others in the area who shared their concerns.

“All we can do now is prove to them that we’re going to be good neighbors and care for them and be a good witness to them,” Ball said.