I’m a Law Professor. Here’s What Happened After I Spoke Out on Black Lives Matter. 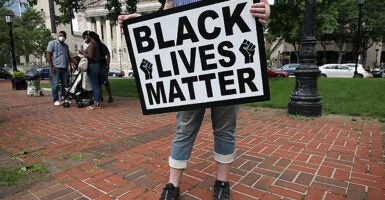 Cancel culture has nothing to do with criticism or debate, and everything to do with silencing opposition so there is no debate. Pictured: A protester holds a sign at a rally in Court Square in Springfield, Massachusetts, July 13. (Photo: Suzanne Kreiter/The Boston Globe/Getty Images)

William A. Jacobson, the founder and publisher of Legal Insurrection, is a clinical professor of law and director of the Securities Law Clinic at Cornell Law School.

During his July 4, 2020, speech at Mount Rushmore, President Donald Trump referred to the “political weapon” of “cancel culture,” describing it as “driving people from their jobs, shaming dissenters, and demanding total submission from anyone who disagrees.”

Trump’s cancel culture reference was scorned by liberal media outlets such as The New York Times, calling such “culture war” comments a “straw-man version of the left.” Similarly, liberal writer Judd Legum dismissed claims of “cancel culture” as “something that does not exist.”

Yet cancel culture is very real, and it’s getting worse with the increased power of the Black Lives Matter movement. There are numerous documented examples of people being investigated or losing their jobs for criticizing Black Lives Matter’s origins or tactics.

Even left-of-center authors and professors, in an open letter in Harper’s Magazine, decried the growing “intolerance of opposing views [and] a vogue for public shaming and ostracism … ” They too were met with denials that cancel culture was a real problem.

This cancel culture has nothing to do with criticism or debate, and everything to do with silencing opposition so there is no debate. I know. I’m going through it now over my criticisms of Black Lives Matter.

I am a clinical professor of law at Cornell Law School. In January 2008, I founded the Cornell Securities Law Clinic, focusing on investment disputes, a popular and important niche for students seeking to work in the corporate world.

In October 2008, I founded the Legal Insurrection, a conservative law and politics website. My non-left-wing politics, though separate from my teaching, sometimes led to attacks on my job. There were threats, harassment, and demands I be fired for the first several years of the website, but those always came from off campus—until now.

That all changed when I wrote two blog posts the first week of June 2020, criticizing Black Lives Matter as riots and looting spread around the country after the death of George Floyd. Now, I am facing cancel culture from within the law school.

In one blog post, I documented how the “Hands up! Don’t shoot!” founding narrative of Black Lives Matter was fabricated after the shooting of Michael Brown in Ferguson, Missouri, in 2014. Even the Obama Justice Department found that Brown was shot after attacking a police officer, and did not have his hands raised in surrender or say, “Don’t shoot.”

Yet to this day, I pointed out, Black Lives Matter protesters chant, “Hands up! Don’t shoot!”

I wrote a second blog post harshly criticizing the riots and looting. I argued that such violence reflected a movement “led by anti-American, anti-capitalist activists … [who] have concocted a false narrative of mass murder of Blacks at the hands of police, when the statistics show otherwise.” I called on the federal government to track down “people who helped coordinate the violence.”

Whether people at Cornell agreed with my off-campus politics is beside the point. The purpose of education, particularly law school education, is to be able to debate the merits of arguments and through that debate come to a better understanding. But that is not what happened.

The response was a paradigm of cancel culture. There was a coordinated email and petition campaign by alumni to get me fired.

A group of 21 of my colleagues in the clinical program then denounced me in a letter to The Cornell Daily Sun student newspaper. While my name was not used in the letter, it was shared with students in advance of publication as a denunciation of me.

The letter falsely accused me of supporting “institutionalized racism and violence” and threatened to “continue to expose and respond to racism masquerading as informed commentary.”

Not one of the 21 signatories, some of whom had been my colleagues for more than a decade and I considered friends, approached me with any concerns before running to the school newspaper and sharing their letter with students. It was reminiscent of so many revolutionary movements, where friends and neighbors rush to denounce each other.

George Washington University law professor Jonathan Turley, hardly a political conservative, criticized my colleagues, writing that their letter was “a chilling reminder of the rapid loss of free speech values on campuses,” not allowing that “critics of these protests could have anything other than racist motivations.”

Turley noted the intimidation factor, since “[t]o be labelled as a racist is devastating to an academic career and these professors know that … It is not just the death of free speech but our intellectual mission on university and college campuses.”

The dean of Cornell Law School also denounced me in an institutional statement that promised no adverse employment action because of my academic freedom and job security, but gratuitously found that my writings “do not reflect the values of Cornell Law School” as the dean has “articulated them.”

The administration never gave me an opportunity to be heard on that damaging accusation, much less a process to challenge it. That statement serves as a warning to unprotected faculty, staff, and students who may disagree with Black Lives Matter to keep their views to themselves.

Student groups have also joined this cancel culture. A coalition of about a dozen student clubs are boycotting my course and called on other students to do the same. They effectively have created a virtual picket line other students must cross. One of the groups even called on the law school “to critically examine the views of the individuals they intend to employ,” reflecting a desire for uniformity of opinion.

I offered to publicly debate a student representative and a faculty member of their choice, but that offer was rejected. They don’t want to criticize me. They want to silence criticism of Black Lives Matter.

While I refuse to be silenced, others are not able to risk such career pressure.

Although I am the target, students and free expression are the real victims. I have received many emails from students telling me that I have a lot of “quiet” support among students, but that they are afraid to speak up for fear of the professional or social consequences. Cancel culture has created this atmosphere of fear and intimidation.

Trump was right about cancel culture, and so were the Harper’s letter signatories. Cancel culture is real and getting worse due to Black Lives Matter orthodoxy.