Harper’s Open Letter Critical of ‘Cancel Culture’ Should Be Applauded, Not Canceled 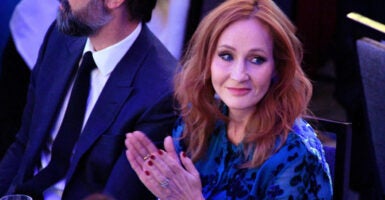 J.K. Rowling, pictured at the 2019 RFK Ripple of Hope Awards on Dec. 12, 2019, in New York City, signed a letter calling for intellectual honesty and freedom of speech in the era of “cancel culture.” (Photo: Dia Dipasupil/Getty Images)

Harper’s Magazine published “A Letter on Justice and Open Debate” online this week, and the contents—as well as the names of some of those who signed the letter—have caused quite a commotion.

A precursor to the print version, which will appear in the October edition of the magazine, the July 7 letter is a rallying cry for intellectual honesty and freedom of speech in the era of “cancel culture.”

Since it was published, however, a bit of a backlash has ensued—some of it from the very people who signed it and some from disappointed readers, who think a call for free speech is somehow harmful to others.

Although I don’t agree with all of it—for example, the letter says President Donald Trump “represents a real threat to democracy”—the gist of the letter is sound and even necessary in an age where the “cancel culture” reigns, discourse is stifled, and disagreement begets threats.

“The free exchange of information and ideas, the lifeblood of a liberal society, is daily becoming more constricted,” the letter reads in part, adding:

While we have come to expect this on the radical right, censoriousness is also spreading more widely in our culture: an intolerance of opposing views, a vogue for public shaming and ostracism, and the tendency to dissolve complex policy issues in a blinding moral certainty.

We uphold the value of robust and even caustic counter-speech from all quarters. But it is now all too common to hear calls for swift and severe retribution in response to perceived transgressions of speech and thought.

The letter concludes, “The restriction of debate, whether by a repressive government or an intolerant society, invariably hurts those who lack power and makes everyone less capable of democratic participation.”

Some of the signatories announced their participation in the manifesto with pride.

However, not everyone was happy they signed the letter, and some changed their minds after it was published.

Others suggested that it was no sacrifice by the signatories to make such a statement because they already have a hefty platform and secure, protected free speech that comes with their fame.

According to Garry Kasparov, a Russian former world chess champion-turned-human rights activist, that’s precisely why so many intellectuals with influential social media platforms like himself and “Harry Potter” author Rowling participated. Who better to stand up to the mob than a leader with chutzpah and a voice?

While I don’t agree with the entirety of the letter, its main tenets are essential and refreshing—even inspiring.

I was pleased to see that even leftist ideologues such as Chomsky recognized and called out the disturbing trend of stifling speech, not because it’s propaganda or factually incorrect, but because it simply makes people “uncomfortable” or sparks disagreement.

Those are not reasons to censor other people or their ideas, and I’m glad to see so many influential people supporting that notion.

But some people intentionally sought to distort the letter and surmised that it was an attack on transgender people, rather than a rallying cry for more free speech.

That, of course, was the point of the letter itself: Disagreement and robust debate should not be allowed to be characterized as indicators of discrimination or marginalization aimed at one group in particular.

It’s no surprise that LGBTQ advocates are responding as they are, offended at calls for free speech, contending that that means no one cares about their advocacy.

That at least one reputable author withdrew her signature after the letter was published—not because of what it said, but because of who else signed it—is a manifestation of the very “cancel culture” to which the letter referred.

Jennifer Finney Boylan tweeted: I “did not know who else had signed that letter. I thought I was endorsing a well meaning, if vague, message against internet shaming.”

Boylan did not specify whose signature raised concerns, but given that Boylan is the co-chair of the board of directors of GLAAD, Boylan may have been trying to distance herself from the fact that Rowling also signed the letter.

In a recent essay, Rowling explained her views on transgender people, expressing empathy but also caution. She said that in Scotland, a man can declare himself a woman without surgery or hormone replacement therapy, apply for and receive a Gender Recognition Certificate, and be declared a woman legally.

All a man needs to ‘become a woman’ is to say he’s one. I refuse to bow down to a movement that I believe is doing demonstrable harm in seeking to erode ‘woman’ as a political and biological class and offering cover to predators like few before it.

I stand alongside the brave women and men, gay, straight, and trans, who’re standing. All I’m asking—all I want—is for similar empathy, similar understanding, to be extended to the many millions of women whose sole crime is wanting their concerns to be heard without receiving threats and abuse.

For her defense of women and children, Rowling has been excoriated publicly as a woman who has used her high-visibility platform to harm the transgender community. Even though it’s clear Rowling has done nothing of the sort, the British author been demonized and her arguments and personal testimony twisted.

The ongoing attacks on Rowling and the outcry the Harper’s Magazine letter has generated, particularly from the transgender community, demonstrates precisely why such a manifesto, “A Letter on Justice and Open Debate,” is needed.

Even more importantly, it shows why, in order to remain a healthy society, we must continue to encourage free speech, protect robust debate, and cancel the “cancel culture.”