How Obama Is Gearing Up to Ignore Lawmakers, Commit US to Significant Carbon Emissions Reductions 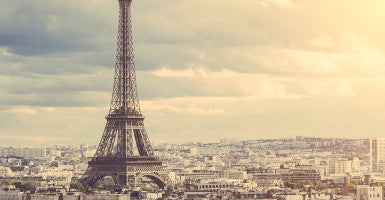 The United States is set to make some serious commitments in Paris soon. (Photo: william87/iStock)

Remember that part of the Constitution that gives the executive branch of government the authority to make a commitment with foreign powers to cap carbon emissions levels and then enforce that commitment domestically with onerous environmental regulations?

Me neither. But that’s exactly what President Obama plans to do in Paris later this year, where he will agree to a new international compact limiting how America uses energy.

Under the new “Paris Protocol,” Obama will commit the U.S. to cut its carbon emissions by more than a fourth (26-28 percent below 2005 levels) by 2025. That is a big promise. It can’t be kept without making major changes in how we produce energy and how we consume it.

Usually the executive branch would submit such a significant agreement to the Senate as a treaty for its advice and consent under Article II of the Constitution. But all indications are that Obama intends no such thing.

It’s not even as if the White House is hiding its disdain for the Senate on this matter. At a March 31 press briefing, White House spokesman Josh Earnest was asked whether Congress has the right to approve the new protocol. His dismissive response: “I think it’s hard to take seriously from some members of Congress who deny the fact that climate change exists that they should have some opportunity to render judgment about a climate change agreement.”

The French host of the upcoming Paris conference, Foreign Minister Laurent Fabius, backs this approach. Addressing delegates at a June climate change conference, Fabius expressed his desire to bypass Congress on the Paris Protocol: “We must find a formula which is valuable for everybody and valuable for the U.S. without going to Congress Whether we like it or not, if it comes to the Congress, they will refuse.”

Liberal politicians, climate change enthusiasts, and the environmental lobby clearly learned a valuable lesson in 1997, when the Kyoto Protocol was treated as a treaty. The Senate, led by Democrat Robert Byrd of West Virginia and Republican Chuck Hagel of Nebraska, criticized Kyoto because it did not require developing nations (e.g., China and India) to limit their carbon emissions. The “Byrd-Hagel resolution” denouncing the Kyoto Protocol passed 95-0.

Obama won’t make the same “mistake” that President Bill Clinton made. He’ll simply pretend that the Paris Protocol is not a treaty. No treaty, no Senate review needed. Hey, that tactic worked for the Iran nuclear agreement, so why not keep the executive train rolling unchecked?

The Senate should show much more concern about these shenanigans. It’s bad enough to be completely ignored and bypassed. But it’s especially egregious in this case, because it would break an explicit promise that that the president made to the Senate in 1992.

Back then, a skeptical Senate made the executive branch promise that any protocols negotiated at U.N. climate conferences containing emissions targets be sent to the Senate for approval. The executive branch agreed to do so. And yet here we are less than 20 years later, and Obama has no intention of letting the Senate review the Paris Protocol?

Keen to finish his legacy checklist, Obama is long past respecting quaint constitutional niceties like separation of powers and Senate review of treaties. The question is whether the Senate will take a stand, protect its prerogatives, and preserve its role in the treaty-making process.

Byrd and Hagel led the bipartisan charge to protect Senate equities in 1997. What will the Senate do in 2015?