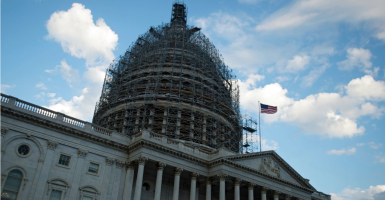 The federal deficit has shrunk for 2015 but the national debt continues to grow. (Photo: Michael Reynolds/EPA/Newscom)

The Obama administration is trumpeting a shrunken federal deficit as new justification for more spending and an end to mandatory budget cuts. The Congressional Budget Office, though, already has warned of “dramatic” debt trouble ahead.

The Department of Treasury last week released the numbers for fiscal year 2015, announcing a $44-billion drop in the deficit from the year before. The deficit stands at $439 billion, which is 2.5 percent of gross domestic product.

Shaun Donovan, director of the Office of Management and Budget, heralded the numbers as the lowest deficit since President Obama took office.

“The deficit has been reduced by nearly three-fourths as a share of the economy since 2009,” Donovan said in a written statement, adding that the figures represent “the most sustained deficit reduction since just after World War II.”

From 2009 to 2011, in the aftermath of the recession, federal deficits exceeded a trillion dollars each year.

Romina Boccia, a senior budget analyst at The Heritage Foundation, said the deficit has shrunk despite, not because of Obama.

“The administration is wrongfully claiming credit for the reduction in the deficit,” said Boccia, the think tank’s Grover M. Hermann fellow.

The real credit, she said, belongs to an economy that recovered from the 2008 recession and “excessive stimulus spending that finally dried up.”

In fiscal 2015, the government spent more than it brought in from taxpayers, but at a lower rate. Government outlays totaled $3.69 trillion—up 5 percent from the year before, according to the report. But federal revenue increased by 8 percent to $3.25 trillion.

Pointing to these numbers, Donovan called for a reversal of “the harmful cuts” of sequestration and passage of the White House’s proposed fiscal 2016 budget.

A mechanism of the Budget Control Act of 2011, sequestration mandates automatic and immediate across-the-board cuts to both defense and domestic programs if spending exceeds specific caps.

The administration has placed the nation “on a fiscal collision course,” Boccia said, “with Obamacare, Social Security, Medicare, and Medicaid driving more than half of the projected increase in spending over the next decade.”

The Congressional Budget Office continues to warn of mounting debt, noting that “the long-term outlook for the federal budget has worsened dramatically over the past several years.”

Reduced now, the deficit soon will grow, according to CBO. Citing increased health care and retirement entitlements in addition to mounting debt payments, the agency predicts that budget deficits “will rise substantially, to $1 trillion in 2025.”

In June, CBO reported that without budget reform, “the federal debt held by the public would exceed 100 percent of GDP [gross domestic product].”

The nonpartisan group Campaign to Fix the Debt warns that dropping deficits won’t mean it becomes easier to confront the debt.

“Congress should not use this temporary decline in the deficit as an excuse to pass budget-busting, deficit financed legislation,” the organization said. “Instead we should reform our unsustainable fiscal trajectory when times are relatively good.

“The task will only get harder with time,” the group warned.

The Treasury Department’s announcement comes as a new budget battle looms in Congress.

Lawmakers have until Nov. 3 to increase the federal debt limit so the government can keep up with current expenditures, Treasury Secretary Jack Lew announced earlier this month.

In an open letter earlier this week to House Speaker John Boehner, R-Ohio, Lew warned authorized funds would be exhausted by then unless Congress raises the debt ceiling.

Legislators have until Dec. 11 to hammer out a budget deal to fund the government for the following year.