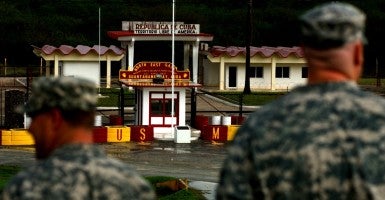 The late Daniel Patrick Moynihan, the outsized liberal senator from New York, is credited with saying “Everyone is entitled to his own opinion, but not his own facts.”

The press and public may want to keep that adage in mind as President Obama threatens to veto the annual National Defense Authorization Act (NDAA) over, among other things, his opinion that the Republicans are keeping him from closing the military detention facility at Guantanamo Bay, Cuba.

In fact, it was Democrats who controlled the House and Senate in 2009-2010 that first passed–in 2009–laws that prohibited the use of funds to transfer any detainees into the United States unless certain criteria were met.

And it was the Democratically controlled House and Senate that passed the same, and more restrictive laws in 2010.

And Obama signed both of those bills, albeit under protest. But the point is, he signed them, and every year since the Congress has placed the same or similar restrictions.

As I recently chronicled, the administration blew the chance to close Gitmo in 2009 and 2010, when both houses of congress where in Democratic hands. The Democrats held a filibuster-proof 60 majority in the Senate, and a 257 to 178 majority in the House of Representatives. They also held 29 out of the nation’s 50 governorships.

So if he wanted to close Gitmo and bring some detainees to the United States, the table was set for him to do so.

But instead of rolling up their sleeves and doing the hard work to close the facility in 2009, the administration made a series of controversial moves that ultimately poisoned the political well on Capitol Hill and resulted in his own party passing laws to prevent the administration from bringing Gitmo detainees to the United States.

May 20 – Obama gave speech at National Archives on Gitmo detainee policy, acknowledged that it “is my responsibility to solve the problem,” and promised to “work with Congress to develop an appropriate legal regime so that our efforts are consistent with our values and our Constitution.”

June 9 – Without appropriate prior notice, administration transfers Ahmed Ghailani from Guantanamo to federal district court in New York to face charges over his role in the 1998 U.S. embassy bombings in Kenya and Tanzania

Summer of 2009 – Hearings on reforms to the Military Commissions Act of 2006.

Nov. 13 – Attorney General Eric Holder announces that five Gitmo terrorists responsible for the 9/11 attacks would be brought to New York to face a federal trial. Politicians from both parties, including Sen. Chuck Schumer D-N.Y., objected.

Dec. 15 – Obama issues a Presidential Memorandum to the attorney general and secretary of defense to purchase the state-run Thompson Correctional Facility in Thompson, Illinois for the express purpose of housing Gitmo detainees. Sen. Dick Durbin, D-Ill., who at first supported the move, withdrew his support when it became “politically impossible.”

Every Congress since has passed similar laws.

So if the president vetoes the NDAA this year, and tries to lay the blame on the Republicans for preventing him from closing Gitmo, someone ought to remind him of 2009, and ask him why the Democrats passed those laws in the first place.