His Brother Was Killed by an Illegal Immigrant in 2011. Now, He’s Angry the Senate Blocked the Sanctuary Cities Bill. 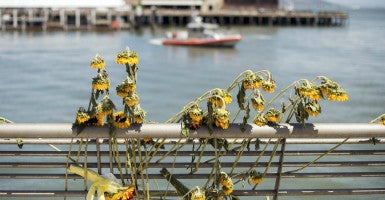 A makeshift memorial was set up for Kate Steinle after she was shot and killed by an illegal immigrant in July. Steine's family and others, like Brian McCann, who had loved ones killed by illegal immigrants have spoken out against sanctuary cities in the wake of her death. (Photo: Noah Berger/Reuters/Newscom)

Two days before his brother Denny McCann’s birthday, Democrats in the Senate blocked a bill that would have withheld federal funding for sanctuary cities, cities that refuse to work with federal immigration officers and turn over immigrants living in the country illegally.

Denny McCann, who was walking in a crosswalk in Chicago, was hit by a drunk driver and killed on June 8, 2011. The driver, Saul Chavez, allegedly dragged Denny McCann’s body before he stopped and was apprehended by another driver and an off-duty police officer.

Chavez, according to congressional testimony given by Brian McCann in July, was charged with aggravated DUI involving a death and had a blood alcohol level of 0.29 percent, more than three times the legal limit.

Brian McCann and his family later learned that Chavez was an an illegal immigrant and had been previously prosecuted for another felony.

That November, two months after Cook County, Ill., political leaders passed an ordinance allowing suspected illegal immigrants in jail to be freed despite requests from the government they remain detained, and two months after the federal government issued a detainer for Chavez, he was released from jail after posting bond.

In addition to prohibiting sanctuary cities from receiving certain federal funds, the legislation also included a measure called “Kate’s Law,” which imposes a minimum sentence of five years for illegal immigrants deported but try to re-enter the U.S..

Kate’s Law is named after 32-year-old Kate Steinle, who was shot and killed by an illegal immigrant in San Francisco in July. San Francisco, along with Chicago, is one of 340 sanctuary cities, counties and states. Vitter’s bill was blocked in a 54-45 party-line vote Wednesday, and Republicans needed 60 votes to move the bill forward. One Republican, Sen. Mark Kirk of Illinois, and all 44 Democrats voted against the legislation.

“This is absurd,” Brian McCann said of Kirk, who represents him. “The lone Republican in the state of Illinois votes against the bill. This is outrageous. It’s incredible he had the audacity to do this.”

After watching the vote and seeing Kirk vote against the sanctuary city bill, Brian McCann left a voicemail with the senator’s office and sent him a letter expressing his disappointment.

“I reviewed the vote totals from yesterday’s vote and was shocked to see you, as the lone Republican, voted no,” he wrote. “I supported you for Senate and now regret my choice. I am a registered Republican in Illinois.”

Kirk’s office did not return The Daily Signal’s request for comment.

Though Brian McCann supported Vitter’s legislation, he recognized that Republicans faced an uphill battle in getting it passed.

“I find it absurd that any senator would’ve voted against it,” he said. “But they did because it’s political. [Washington] D.C. is divided. I expected it would fail. I know power politics.”

Now, he says a ruling from the United States Court of Appeals for the Fifth Circuit in New Orleans, which upheld a prior ruling putting President Barack Obama’s executive actions on immigration on hold, gives him hope.

The order means that illegal immigrants won’t be granted deportation relief, at least for the time being.

“That favors what we’re trying to do,” he said.

Among the families of other victims killed by illegal immigrants, there were varying degrees of support for the legislation addressing sanctuary cities and illegal immigration. Though McCann was happy with Vitter’s bill, others who lost loved ones would like to see a policy fix that’s more comprehensive or a vote solely on Kate’s Law, he said.

Together, they form a tight-knit group with an unfortunate bond—the families who have had siblings, children or spouses killed by illegal immigrants, many of whom were convicted of past crimes but never deported, and many of whom were protected in sanctuary cities.

Brian McCann may be angry, he told The Daily Signal, but there are others who are more angry than he is; others who are still mourning, like Steinle’s mother and father.

“These are people that had lives ahead of them,” Brian McCann said of the other victims. “My brother had completed most of his.”

In the meantime, and in spite of the failed vote in the Senate, Brian McCann and his family are paying homage to their lost loved one.

Each October, family and friends fly to Illinois to honor Denny McCann, and this year is no different.