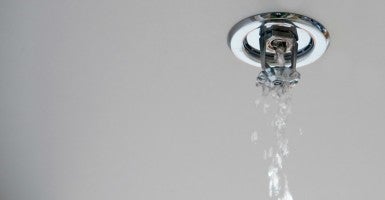 The sprinkler requirements are expensive and unnecessary, opponents argued, and do little or nothing to increase safety beyond what is provided by already mandatory smoke detectors. But the Minnesota Court of Appeals ultimately tossed the regulations because of an “arbitrary” threshold written into the rules.

The rule, adopted by the state Department of Labor and Industry last year, required sprinkler systems in all new homes of at least 4,500 square feet.

“We conclude that the 4,500-square-foot threshold for one-family dwellings is arbitrary and not supported by substantial evidence in the record,” wrote Judge Francis Connolly in the unanimous ruling by the three-judge panel that reviewed the case.

Legal precedent says there must be a “reasoned determination” for why administrative regulations like the sprinkler requirement, or any other aspect of a building code, would apply to some homes and structures but not to others, Connolly wrote.

“Because the record does not include evidence of any reasoned determination to indefinitely exempt new one-family dwellings under 4,500 square feet, the sprinkler rule must be declared invalid,” he concluded.

Sprinkler requirements have become more common across the country in recent years, usually the result of lobbying efforts by organizations representing firefighters.

In Minnesota, firefighters pushed for mandatory sprinkler systems during the 2014 legislative session, but the bill failed in the state legislature. After that failure, the Department of Labor and Industry took up the issue and approved the sprinkler mandate as part of an annual update to the state’s building code.

The Builders Association of the Twin Cities, one of several construction and real estate organizations behind the legal challenge to the sprinkler mandate, says the requirement adds about $10,000 to the cost of a new house and argues it’s unnecessary, since the vast majority of fire deaths happen in older homes that wouldn’t have sprinklers anyway.

“Safety is the highest priority of Minnesota builders, and we are proud that new homes in Minnesota are among the safest in the nation. The sprinkler mandate would not have changed that safety record, but it would have made homes more expensive for Minnesota families,” said David Siegel, executive director of the BATC, in a statement. “The Court’s decision to invalidate the sprinkler rule confirms what the public, legislature, and code experts have overwhelmingly stated all along, the sprinkler mandate is arbitrary and not supported.”

The Department of Labor and Industry says it is reviewing the decision. The department has 30 days to appeal the ruling to the Minnesota Supreme Court.

California; Maryland; and Washington, D.C., require sprinkler systems in all new family homes. Similar rules have been proposed in numerous other states, according to data from the National Fire Protection Association, which supports the mandates.

The NFPA says sprinklers can buy extra time to escape from a house fire and can help keep a fire contained until firefighters arrive on the scene.

In many others states, the sprinkler mandate has faced a backlash from politicians who are wary about driving up the cost of new homes as the nation is still recovering from the housing crash of the past decade.

According to the National Conference of State Legislatures, 34 states have prohibited the passage of mandatory sprinkler requirements, either legislatively or through the adoption of code.

Builders associations have argued there is nothing to stop homeowners from voluntarily adding sprinkler systems to their homes, and paying the added cost, if they want the extra safety benefits. Making the systems mandatory, they say, is overreach.