Meet the Single Mom Who Took On the IRS 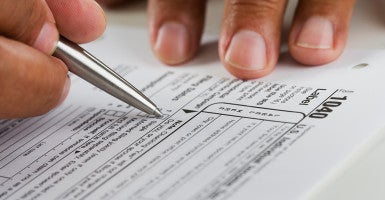 Sabina Loving always knew she wanted to work for herself.

So much so that, when an abandoned storefront was renovated and became available for rent across the street from her house on the South Side of Chicago in 2010, she decided that one day she would operate her budding tax-preparation business out of it.

“When I saw the landlord fixing it up, I inquired about it, and he said, ‘Oh, no, it’s already rented,’” Loving, 47, recalls in an interview with The Daily Signal.

But Loving, at the time a single mother who worked a full-time job and spent nights preparing taxes for low-income clients, was determined.

As fate would have it, when the people who had leased the storefront had to go out of town for an extended period of time, the owner ended up renting the space to Loving.

The storefront was open for business for the first time in a decade as Loving excitedly launched Loving Tax Services, grew her client list, and left her full-time job to pursue what she calls her “passion.”

The Internal Revenue Service promptly slapped her with regulations. That “licensing conversation” went something like this: In 2011, the IRS sought to begin regulating the nation’s roughly 300,000 independent tax preparers based on an 1884 statute called the Dead Horse Act.

The IRS argued that the 127-year-old law, enacted before the nation had an income tax,  allowed them to extend current rules to tax preparers.

“The statute that they were relying on was passed in an era when there was no income tax, and there were no tax preparers,” lawyer Dan Alban, who represents Loving, says. “That was a bridge too far.”

Alban, part of the Institute for Justice, a public interest law firm, adds:

This was the largest number of people affected by [occupational licensing] that we’ve ever encountered. It was a nationwide licensing scheme.

By law, roughly one-quarter of all American workers must have a license to do their job, a fivefold increase from the 1950s, according to a recent White House report. The study, “Occupational Licensing: A Framework for Policymakers,” was produced by the Department of Treasury’s Office of Economic Policy, the Council of Economic Advisers, and the Department of Labor.

Loving says the unexpected IRS regulations threatened the core of her business, since she wasn’t able to hire employees and expand.

“I worked in corporate America for 12 years as an accountant,” Loving says. “I did everything I was supposed to. I went to school. I have two degrees. Started a career. And that did not protect me.”

At the time, she estimates, the new regulations cost her several hundred dollars to a thousand dollars per employee.

“A lot of tax preparers are seasonal, and they only do a handful of returns per year,” Alban says. “It quickly becomes not worth it to prepare [a return] if you then also have to pay $116 to take an exam, $63 to get a [personal tax identification number], however much the continuing education costs. All of those costs add up.”

With the help of Alban, and the Institute for Justice’s Clinic on Entrepreneurship at the University of Chicago, Loving and two other tax preparers sued the IRS. Last year, she won the case, Loving v. Commissioner.

“The IRS invented out of whole cloth these regulations, and did not actually have the statutory authority to implement them,” Alban says. “Both the U.S. District Court here in D.C. and the D.C. Circuit agreed with us, and the IRS decided not to appeal to the Supreme Court.”

It was a victory for Loving, a small business owner who calls America “the land of opportunity.”

Despite that victory, though, Loving still fights to operate her business free of intrusive regulations.

An amendment proposed by the Senate Finance Committee, led by Chairman Orrin Hatch, R-Utah, would alter Title 31 of the U.S. Code to give the IRS the authority to regulate tax preparers.

The bipartisan bill, which also takes steps to protect taxpayers against identity theft, went through a committee markup Wednesday.

Loving, saying her livelihood is threatened, testified against the proposal Tuesday in front of the Senate committee.

When Loving finished sharing her story, Sen. Ted Cruz, R-Texas, thanked her for “particularly powerful testimony” and for “standing up to the power of government and the power of big money and lobbying.”

Loving wonders why that power is arrayed against her.

“I’m still growing a business, I’m only 5 years old,” she says. “And for someone to try to put you out of business when you’re just getting started. … Why now?”