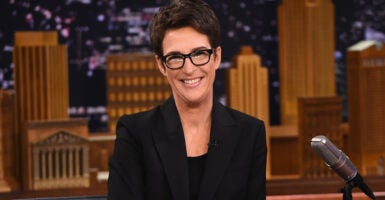 The unprecedented leak Monday night revealed that the majority of justices had reportedly agreed in a December vote to overturn Roe v. Wade, which protects abortion as a constitutional right, though the vote is not yet final and may still change, according to Politico. Some liberals praised the move as a heroic, last-ditch effort to derail the court’s decision.

Some liberals saw the public outcry over the leak as a good thing, noting that it could put pressure on justices to reconsider their decisions.

“Is a brave clerk taking this unpredecented step of leaking a draft opinion to warn the country what’s coming in a last-ditch Hail Mary attempt to see if the public response might cause the Court to reconsider?” said Brian Fallon, executive director of the liberal group Demand Justice.

“All Democrats need to show the same urgency as the clerk who apparently risked his or her career to sound this alarm. Those on the inside know best how broken the institution is. We should listen,” Fallon added.

“Seriously, shout out to whoever the hero was within the Supreme Court who said ‘f— it! Let’s burn this place down,’” wrote Ian Millhiser, a senior correspondent at Vox .

“A leak like this has never in the modern history of SCOTUS. It is a massive deal that someone thought the public deserved to see what was going on in their chambers. A hero,” Jezebel senior reporter Caitlin Cruz said.

Some legal experts speculated that the leak may have violated the law. Mike Davis, a former clerk for Justice Samuel Alito, said the leaker was likely guilty of felony obstruction of justice.