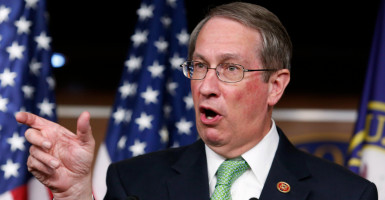 Lawmakers in the House Judiciary Committee stamped their mark on a criminal justice initiative to reform federal sentencing.

“We don’t always agree on everything, but we do agree that criminal justice reform is not a liberal or conservative issue; it’s an American issue,” Goodlatte stated at a press conference held Thursday.

Goodlatte says the bill will ensure fair and just federal sentences, while violent criminals are not released back on the streets.

The new bill reflects, through federal laws and regulations, appropriate ways to punish criminals and protect individual freedom; in addition, the bill tries not to step on the toes of state efforts or waste taxpayer dollars.

“We have been working for months to identify solutions on issues such as over-criminalization, sentencing reform, prison and reentry reform, improved criminal procedures and policing strategies, and civil asset forfeiture reform,” Goodlatte said.

An Over-Criminalization Task Force was authorized in 2013 at the start of Goodlatte’s chairmanship. This task force helped assess current federal criminal laws and recommended improvements.

The House Judiciary moved faster than expected to get a criminal justice reform bill on the table, a piece that acts as a companion bill to legislation introduced Oct. 1 in the Senate.

The bill unveiled in the House is not a mirror image of the criminal justice reform proposal by the Senate Judiciary Committee (headed by Sen. Chuck Grassley, R-Iowa), but has similar items of action. A bipartisan group of senators, including Mike Lee, R-Utah and Dick Durbin, D-Ill., reached a deal on their own reform bill last week. (Photo By Tom Williams/CQ Roll Call)

According to Goodlatte, the House worked with the Senate to craft complementary criminal justice reform legislation.

“We really are at a zenith of momentum for criminal justice reform,” advocacy group U.S. Justice Action Network Executive Director Holly Harris stated. “In one remarkable week, leaders on both sides of the aisle in both chambers have presented significant sentencing reforms that can safely reduce the federal prison population and astronomical costs to taxpayers.”

Harris remarks in a press release that her organization is “increasingly hopeful” that Congress will pass a comprehensive criminal justice reform bill this year.

The House Judiciary bill, among other points, will reduce a “three-strike” drug offense mandatory life sentence down to 25 years and a “two-strike” mandatory sentence from 20 to 15 years. Drug sentences may be enhanced for offenders who have had prior serious violent felonies.

“Chairman Goodlatte was one of the last defenders of our counterproductive mandatory sentencing laws, so we’re glad to see him take this positive step toward reform,” Molly Gill of nonprofit Families Against Mandatory Minimums said in a statement. “While the bill introduced today improves upon the status quo, we’re not convinced that it is the best the House can do.”

The bill would retroactively apply to some current federal sentences. This may limit the scope of who seeks sentence adjustments, according to Gill. She claims, “Limited retroactivity isn’t fair or right.”

Goodlatte says he hopes the committee will quickly pass the bill “and will roll out additional criminal justice reform bills over the coming weeks.”

Once the bill gets passed through the Judiciary Committee, it can be voted on by the full House. If the House and Senate both agree on a bill, it will be sent to the president.

“It is encouraging to see a bipartisan group of congressmen introduce a reform package so closely on the heels of the Senate doing the same thing,” said John Malcolm, The Heritage Foundation’s director of the Meese Center for Legal and Judicial Studies. “The bill is designed to ensure that low-level drug offenders are given sentences that more accurately reflect the severity of the crimes they have committed while still ensuring that kingpins and violent drug dealers whose actions result in death or serious bodily injury are punished severely.”

“We have this rare coming together of bipartisanship,” Conyers thanked his colleagues for their work.

During the press conference on Thursday, Conyers stated his confidence that the criminal justice reform legislation will move through Congress.

“We want to get it to the president’s desk as soon as possible for his signature,” Conyers said.