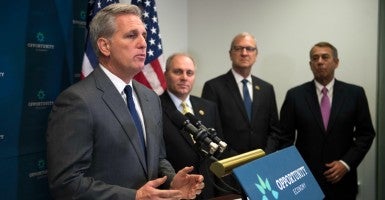 The upcoming leadership races should not be driven by personality, quid pro quo committee assignments, and fundraising prowess. Instead, those races should be determined by policy and process.

The complete absence of a conservative agenda by the Republican-controlled Congress must change. In evaluating leadership candidates, members should demand clarity as to how each one would put forward a positive conservative agenda that promotes opportunity for all and favoritism to none. Policies such as higher education reform, entitlement and tax reform, and securing religious liberty are just a few examples. Significant internal rules changes that decentralize power in the House are also important.

In evaluating leadership candidates, members should demand clarity as to how each one would fight the numerous legislative battles that will emerge over the remainder of the year.

Here are 7 near-term issues that members should evaluate the next speaker and his or her leadership team on to begin rebuilding trust:

The opportunity for a change in leadership should empower rank-and-file lawmakers.

The Republican-controlled House should embrace this as an opportunity to align itself with the conservative grassroots and increase the likelihood that the party will actually fight for conservative policy priorities. That will not happen through inertia. It will take a concerted effort to ensure the meaning of the moment is not lost.

No one should need an army of lawyers, lobbyists, and accountants to succeed in this great nation.

We have a chance to take back America, but it will require the Republican Party to fight for all Americans, not the powerful and well-connected.