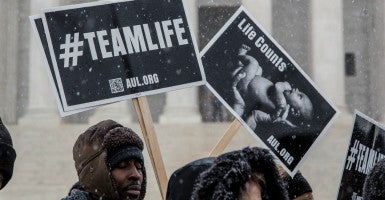 A spokesperson for Trinity Health said in a statement provided to The Daily Signal that “this case has no merit.”

“A federal court already dismissed a similar ACLU claim, and we will seek dismissal of this suit for the same reason. The Ethical and Religious Directives are entirely consistent with high-quality health care, and our clinicians continue to provide superb care throughout the communities we serve. We are proud that more than 25,000 licensed physicians work directly with our health system and share our commitment to people-centered care.”

As a Catholic health organization, Trinity Health complies with the Ethical and Religious Directives put forth by the United States Conference of Catholic Bishops.

“We’re taking a stand today to fight for pregnant women who are denied potentially life-saving care because doctors are forced to follow religious directives rather than best medical practices,” ACLU of Michigan staff attorney Brooke A. Tucker said in a statement. “Catholic bishops are not licensed medical professionals and have no place dictating how doctors practice medicine, especially when it violates federal law.”

Roger Severino, the director of the DeVos Center at The Heritage Foundation, said that “religious health care professionals and institutions serve the neediest among us every day out of sincere religious conviction.”

“Instead of thanking them, the ACLU wants to coerce them into violating their beliefs by forcing them to perform abortions. If successful, these lawsuits could lead to less, not more, health care for the needy because many health care providers would close rather than be forced to destroy innocent human lives with their own hands.”