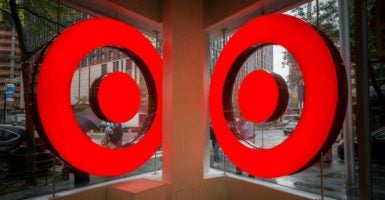 Watchdog group 2ndVote has launched the #AnywhereButTARGET hashtag and website to encourage customers to do their Christmas shopping at places other than the retail giant. (Photo: Avalon/Newscom)

A conservative watchdog group has started a campaign to boycott Target over its bathroom policies.

In April, Target announced that customers and employees at its locations would be allowed to “use the restroom or fitting room facility that corresponds with their gender identity.”

At the time, the American Family Association launched a petition to boycott the company for the policy, which garnered over 1 million signatures.

Now, watchdog group 2ndVote has launched the #AnywhereButTARGET hashtag and website to encourage customers to do their Christmas shopping elsewhere.

The stated purpose of the boycott is to “make Target understand that there are consequences for supporting a radical movement that is determined to redefine marriage, gender, and, ultimately, the First Amendment.”

According to the group’s press release:

2ndVote is calling on conservative consumers to engage the country’s second-largest retailer on its company-wide policy that allows and encourages individuals to choose restroom and changing room facilities based on gender identity rather than biological sex. Immediate pushback from conservatives forced Target to spend $20 million to add gender neutral bathrooms to its stores shortly after announcing the policy earlier this year.

Following the American Family Association boycott, Target announced it would spend $20 million to install private, unisex restrooms in its stores.

“When a company as large and well-known as Target chooses to insert itself directly into such a radical movement that seeks to ultimately destroy religious liberty and completely goes against our conservative values, it’s our role as an organization to give conservatives a way to communicate directly with the company,” 2ndVote Executive Director Lance Wray said in a statement.

According to its website, 2ndVote is a group that seeks to “expose the corporate influence on major policy decisions and turn the tide on the attacks on conservative values and principles.”

Boycotts of companies for the political views of their owners has become a trend in recent years, with supporters of same-sex marriage boycotting Chick–fil–A in 2012, and supporters of mandatory contraception coverage boycotting Hobby Lobby in 2014.