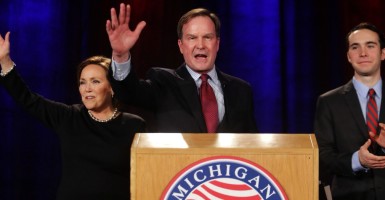 Civil forfeiture reformers in Michigan just gained an unlikely but welcome ally: Michigan Attorney General Bill Schuette. To date, the forfeiture debate in virtually every state has been characterized by a stiff divide between reformers demanding change and a law enforcement establishment implacably opposed to it.

Schuette’s endorsement of reform legislation seems to be breaking that mold, and the forfeiture reform movement as a whole is better for it.

Civil asset forfeiture is the much-maligned law enforcement tool that enables property to be seized if law enforcement authorities suspect that it was involved in, or the proceeds of, criminal activity. Cash, cars, homes, and bank accounts can all be seized under forfeiture laws, and because the ensuing cases are civil, not criminal, there is typically no right to an attorney or presumption of innocence for property owners.

That means that in a typical civil forfeiture case, to win back seized property, the owners must effectively prove their own innocence—and do so without the benefit of an attorney if they cannot afford one. Many forfeiture cases are not even challenged, owing to the high cost relative to the value of the property seized and the low odds of success.

The result: Michigan law enforcement agencies have seized cash and property valued at more than $270 million since 2001.

No doubt much—indeed, probably most—of those funds can be traced to drug transactions or other illicit affairs. But it is equally certain that some of law enforcement’s haul came from innocent Michiganders who had committed no crimes.

Take, for example, the 2008 mass seizure of vehicles from patrons of the Detroit Contemporary Art Institute’s “Funk Night.” The museum had failed to obtain a liquor license. In the minds of Detroit police, the guests were complicit in the museum’s negligence. Following a SWAT-style raid, police seized every vehicle—44 in all—and then demanded $900 apiece for their return.

Ironically, one guest’s car was stolen while it was in police custody.

A judge later ruled the seizures unconstitutional, part of a wider practice in Detroit of raiding establishments without liquor licenses, detaining and searching patrons, and seizing their vehicles.

Then there was Krista Vaughn, whose car was taken simply because she gave her friend, Amanda, a ride to the bank. While Amanda was waiting for Krista to circle back and pick her up, she made eye contact with a cop. On that basis alone, he accused Amanda of being a prostitute and seized Krista’s car on the theory that it was facilitating illegal prostitution. All charges were later dropped, but Krista still had to pay $1,800 to get her car back and repair damage incurred when it was towed away.

Such is the present-day reality of civil forfeiture, where a property’s value on the auction block often seems more important to law enforcement officials than the truth of whether it was actually used to commit a crime.

Fortunately, citizens and lawmakers in Michigan are taking note. In June, the State House passed a package of reform bills that would raise evidentiary standards in forfeiture cases to “clear and convincing evidence,” a welcome change from the current “preponderance of the evidence” standard that is simply too low, given what is often at stake.

The House proposals also seek greater transparency in the state’s forfeiture operations. Agencies would have to report what they seize, the final disposition of forfeited property and currency, what underlying offense was alleged to justify the seizure, and whether the property owner was ever charged with or convicted of that offense.

While forfeiture started its rise to prominence in the 1980s as a means of disrupting the drug trade, its reach has since expanded well beyond narcotics. In fact, at the federal level, more than 400 crimes authorize civil forfeiture.

Broader and more detailed reporting requirements will bring a greater degree of transparency to the forfeiture system. Hopefully, these reforms will help prevent future scandals like the recent affair in Romulus, Mich. Police there used funds seized in drug and prostitution stings to purchase drugs and patronize prostitutes, a malfeasance made possible by forfeiture’s opacity and lack of accountability.

The House-passed legislation is now working its way through the Michigan Senate. Along the way, the reform bills have won approval from the Michigan Association of Police Organizations and now from the state’s top law enforcement official. Some prosecutors, however, have objected to raising the burden of proof.

The proposals like those now before the Senate represent evolutionary, rather than revolutionary, changes to Michigan law. As such, they are important first steps rather than the culmination of reform. Heritage’s Meese Center has released Arresting Your Property, a detailed report in which we outline nine policy measures aimed at restoring forfeiture to its original, narrow purpose: relieving drug dealers, criminal kingpins, and their money launderers of their ill-gotten gains.

Raising the burden of proof and requiring detailed forfeiture reporting are two of these critical policy changes. But reform will not be complete until the perverse financial incentives in forfeiture law are undone, and forfeiture revenues are returned to the control of the legislature.

In the meantime, Michigan deserves applause for accomplishing what few other states have: beginning to bridge the divide between law enforcement and reformers. Hopefully, it is a trend that will continue as other states tackle the difficult but necessary work of reforming civil forfeiture.