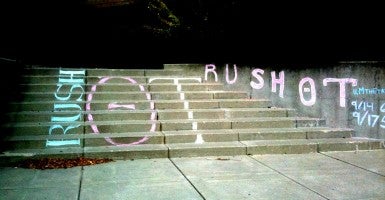 One small step in the right direction would be strong statements by college administrators that traditional political activity of all types is welcome on private and public campuses. (Photo: Jason Chou / Flickr/ CC BY-SA 2.0)

The University of Michigan is one of our nation’s premier institutions of higher learning. Young people from all over the country move to Ann Arbor every year to obtain an education and to have their ideas challenged by exposure to fellow students from many walks of life.

Or maybe not. Last Thursday afternoon, a number of anonymous chalk messages appeared on campus. But because these innocuous chalk messages read “#StopIslam” and “Trump 2016,” they elicited 911 calls and an apology from the president of the university. Apparently such statements constitute “hate speech.”

In America, anonymous and pseudonymous speech is deeply rooted in our constitutional tradition.

At Michigan, chalk messages are a common occurrence, as they are across America. Want to advertise a party? Your fraternity? Want to make a joke? Want to complain about the dining hall? Chalk on sidewalks is one of the most common ways college students express themselves, because it is easily washed off.

One other reason why chalk messages are used is because they are anonymous. And in America, anonymous and pseudonymous speech is deeply rooted in our constitutional tradition.

For example, the Federalist Papers (newspaper essays advocating ratification of the U.S. Constitution) themselves were written by James Madison, Alexander Hamilton, and John Jay and published under the pseudonym “Publius.”

This was done in part so that critics would be forced to engage the Federalist Papers on the merits rather than attacking the authors personally.

Another reason people might want to keep their political opinions secret is because these opinions might be unpopular, even if not unreasonable. Forcing all expression to be identifiable is a sure way to chill speech by intimidating speakers. This is, critically, one reason the Supreme Court in Talley v. California (1960) struck down a law prohibiting the distribution of anonymous pamphlets.

The lesson has not been learned by all, because today in California, Attorney General Kamala Harris is seeking to force nonprofits to hand over their donor lists to the government. There is little doubt that this move is intended to intimidate conservative groups by doing something that violates the spirit, if not the letter of the First Amendment.

Nowhere in America is the urge to censor and intimidate dissenting opinion more apparent than on college campuses, where students are treated to “safe spaces” from dissenting opinion and where even mentioning controversial topics will “trigger” feelings of insecurity by the unique snowflakes that are our college students.

Apparently pro-Trump chalkings by students have occurred now on several campuses, and the overreaction by politically correct college administrations has elicited a hashtag for this phenomenon: the #Chalkening.

If there is one thing that motivates college students more than free food and booze, it is getting a rise out of people, and in response to the media attention given the #Chalkening at Michigan and Emory, students across the country have repeated the event, with reports of chalk messages at Louisiana State University, the University of Maryland, and many others.

There are several lessons to be learned from the #Chalkening, if we only care to listen.

First, rather than being able to rely on universities as places of learning and debate, conservatives on today’s campuses risk much when they express themselves, and they are driven to anonymous speech. Second, there are many who use the language of rights today who are utterly disconnected from those rights, whether it is a student saying he is “harmed” by traditional speech or a professor claiming that students have a First Amendment right to protest without being filmed. It is very difficult to protect traditional constitutional rights when the language of rights is being abused.

Finally, our college students, and many others in our country, are increasingly seeing political enemies not as reasonable co-citizens worth engaging in conversation, but as threats that must be destroyed. This is a shame. One small step in the right direction would be strong statements by college administrators that traditional political activity of all types is welcome on private and public campuses.