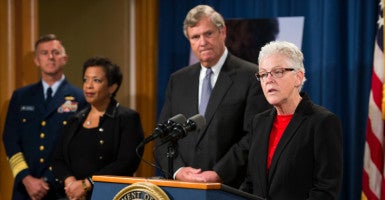 When the U.S. Environmental Protection Agency announced last week it was toughening the country’s rules for ground-level ozone—what’s commonly known as smog, which comes from sources such as tailpipes and smokestacks—it caught flak from environmental groups and business officials.

But when all is said and done, the people most affected financially figure to be everyday Americans, who will almost certainly pay higher prices in their utility bills and the products they buy.

EPA Administrator Gina McCarthy made the long awaited ozone announcement early Thursday afternoon, deciding to lower the amount of ozone in the air from 75 parts per billion to 70 parts per billion.

“If someone tells you your life will change because of this, I will say it will only change for the better,” McCarthy said in a conference call with energy and environmental reporters.

Even though many came into Thursday’s announcement expecting the EPA to set a standard of 65 ppb, business groups still said the regulation will result in more burdensome and expensive changes.

On the opposite spectrum, environmental and health groups complained that the EPA should have strengthened the standard to 60 ppb.

“We know that this regulation could have been worse, but it still feels like a punch in the gut,” said Tom Riordan, CEO and president of a metals-manufacturing company based in Wisconsin that has about 2,100 employees. “Manufacturers are tough and resilient but when Washington puts politics above job creation, we still pay a price.”

“This weak-kneed action leaves children, seniors and asthmatics without the protection doctors say they need from this dangerous pollutant,” said David Baron, managing attorney for the environmental group Earthjustice.

How much will the new rule cost the average American? Business groups insist that the new regulation will be remarkably expensive.

The National Association of Manufacturers released a study in February claiming updated rules will cost the U.S. economy $1.7 trillion between 2017 and 2040. Another study compiled by NERA Economic Consulting at the request of the manufacturing group estimated that reducing ozone regulations to 65 ppb would cost the average household $830 a year.

McCarthy has dismissed those numbers as exaggerated and on Thursday said, “The National Association of Manufacturers has said a lot of things in the last 30 years … I am not looking at what other people are saying.”

The EPA has emphasized its own studies, which reported that ground-level ozone regulations at 70 ppb translate into numerous public health benefits—reducing the number of sick days and emergency room visits, for example—that would save $6.4 billion-$13 billion per year by 2025. But at the same time, when the rules were first proposed late last year, the EPA acknowledged a compliance cost of close to $3.9 billion a year by 2025.

“Obviously, this is going to cost a lot,” said Kish of IER, a group that looks to address energy and environmental issues with free-market solutions and opposed toughening the ozone standards. “If communities fail to be in compliance with this, EPA is in position to begin not allowing permits. If a factory wants to be built, they can say, ‘Sorry, we can’t give you any permits because you happen to be out of compliance.’”

A big reason for the expense? Stricter ozone regulations means factories and power plants have to install scrubbers and other technologies on smokestacks to reduce the chemicals put into the air. Scrubbers can cost tens of millions of dollars, and each degree that the ozone standard is lowered, the costs pile up.

But McCarthy said she’s confident the new rule will not be overly burdensome, and the agency “is giving states plenty of time” to meet the standard by 2025.

“The science clearly tells us that 75 ppb is not adequately protecting public health,” McCarthy said.

As for predictions that large numbers of counties across the country won’t be able to meet the goals, McCarthy said, “We can’t tell you the number exactly, but we’ve looked at modeling this issue.”

She added that EPA projections say just 14 counties outside of California will be out of attainment by 2025.

“Ultimately, the existing level of 75 [ppb] was adequate,” Kish said. “Some communities haven’t even met the 75 limit. One of the things elected officials around the country have said is, why not wait until we meet the existing limit, which we’ve been working hard on?”

George Heartwell, the mayor of Grand Rapids, Michigan, appeared on the conference call with McCarthy in support of lowering the ozone level to 70 ppb.

“I’m confident in the time allowed in this new rule we’ll be able to meet the new standard,” Heartwell said. “I strongly believe the crisis of global warming and its effects on the environment provide us with moral imperatives. We must be good stewards.”

But other elected officials have pushed back at the EPA—even those who are usually supportive of the Obama administration.

Last month, Colorado’s top two Democrats—Gov. John Hickenlooper and U.S. Sen. Michael Bennet—said they were “deeply concerned” whether the Rocky Mountain State could afford to make the changes needed and echoed complaints from other high-altitude states such as New Mexico that stricter ozone standards hurt them more than states closer to sea level.

“Because of pollution that’s coming in from other Western states, from across the globe, from across wildfires in the West, we have significant parts of our state that would be non-attainment zones from the very beginning of the law,” Bennet said. “That doesn’t make any sense, it’s not going to work.”

“These are always difficult decisions,” McCarthy said. “What the Clean Air Act tells me to do is to make my best judgment based on the science … It should be no less than what I need to do and no more. In the end it’s a judgment call by the (EPA) administrator … I realized how serious this decision is. I did not base it on a popularity contest.”

When will the new rule go into effect? The EPA will designate areas in 2017. Those that don’t attain 70 ppb will have from 2020 to 2037 to meet the standard, with the deadlines varying based on the severity of their ozone pollution.

“For me, what does this mean for foregone investment?” Kish said. “People who might invest in something or want to expand something. It’s going to limit opportunities that would have otherwise been there. The hidden costs of this is often what’s hardest to determine but … they’re real, they’re palpable. People make business decisions based on this.”