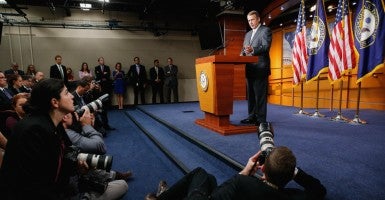 U.S. House Speaker John Boehner (R-OH) publicly announces his resignation as Speaker and from the U.S. Congress at a news conference at the U.S. Capitol in Washington, September 25, 2015. (Photo JONATHAN ERNST/REUTERS/Newscom)

As Rep. John Boehner, R-Ohio, enters the last month of his forcibly shortened tenure as speaker, his allies are desperate to make the case that he will leave a “conservative legacy.” The primary argument made by folks, such as Karl Rove, in favor of Boehner’s conservatism centers on fiscal restraint.

The Wall Street Journal’s editorial board put it this way a couple days ago:

[A]mid all the conservative denunciations of the John Boehner era, a key political fact is typically ignored. To wit, the GOP takeover of the House in 2010 has led to a marked decline in federal spending.

A better explanation [for the spending decline] are the discretionary spending caps and sequester included as part of the 2011 agreement between the House GOP and President Obama. Those caps forced discipline that has kept a lid on spending-as-usual. Each year President Obama has requested far more spending in his budget proposal, but Congress stayed under the caps until easing them slightly for the current fiscal year in the 2014 budget deal.

This is where things get interesting. The Wall Street Journal’s editorial board was not particularly enthusiastic about the 2011 fight over the debt ceiling.

Republican Senate leader Mitch McConnell said yesterday he’s concluded that no deal to raise the debt ceiling in return for serious spending restraint is possible with President Obama, and who can blame him? We’ve never thought the debt ceiling was the best leverage for a showdown over the entitlement state, and now it looks like Mr. Obama is trying to use it as a way to blame the GOP for the lousy economy.

Lest you think the editorial writers simply woke up on the wrong side of the bed one morning, two weeks later, those same editors unleashed a torrent of insults toward those who sought to use the debt limit as leverage:

The Speaker may now have to seek the tender mercies of Nancy Pelosi to get a final bill through the House, and who knows what her price will be. The debt-limit hobbits should also realize that at this point the Washington fracas they are prolonging isn’t helping their cause. Republicans are not looking like adults to whom voters can entrust the government.

Rep. Kevin McCarthy, R-Calif., who at the time was the majority whip, saw the role conservatives played in the debt ceiling debate a bit differently. In an interview with the Washington Post days after the 2011 deal, McCarthy put it this way:

Would Democrats have ever agreed if they thought the new freshman class was going to roll over? No. The freshmen made our hand so much stronger. You had a fear of how far they would go. I’m sure the president looks back, too, and was fearful. But in negotiations, isn’t that the best thing?

The very results the Wall Street Journal’s editorial writers now herald as Boehner’s chief accomplishment occurred only because those derided as “debt-limit hobbits” created leverage. Ironically, it is now conservatives fighting to maintain the spending caps that Boehner is in the process of negotiating away.

And if so, will they side with the hobbits or the chain-smoking Ohioan?