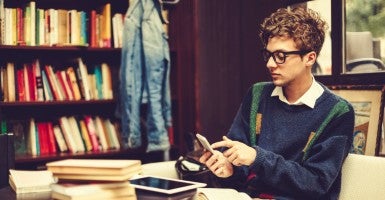 A new poll shows a decline in the use of public libraries, but a strong advocacy to keep them in communities. (Photo: iStock Photos)

The majority of Americans, 66 percent, believe that closing public libraries would have little to no impact on themselves or their families, according to a recent survey by the Pew Research Center. The number of respondents who have borrowed printed books from a public library has dropped by seven percent in the past three years.

However, 65 percent of Americans do believe that closing a library would have a major effect on their community.

According to the survey, released on Sept. 15, higher percentages of female respondents, parents of minors, and respondents ages 50 and older said that closing down public libraries would have a major impact on their community.

The center’s report concluded that Americans are divided when it comes to the role of public libraries:

There are relatively active constituents who hope libraries will maintain valuable legacy functions such as lending printed books. At the same time, there are those who support the idea that libraries should adapt to a world where more and more information lives in digital form, accessible anytime and anywhere.

The report also found that Americans use the public library for a variety of reasons—including “as a place to sit and read, research health care information, learn about technology, and browse the Internet.”

The Pew Research Center surveyed 2,004 Americans, ages 16 and older, regarding their use of libraries from March 17 to April 12.