No, America Was Not Founded On Racist Principles 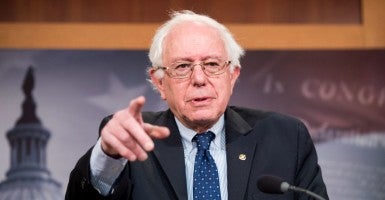 Mike Sabo, formerly a research assistant for the B. Kenneth Simon Center for Principles and Politics at The Heritage Foundation, is the editor of Real Clear Public Affairs: American Civics.

Last week, Sen. Bernie Sanders, I-Vt., told an audience at Liberty University that the United States was founded “on racist principles.” He added, “That’s a fact. We have come a long way as a nation.”

The principles on which on our country was established are articulated with clarity in the Declaration of Independence. On the matter of race, the Declaration has one simple but profound teaching: “all men are created equal.” That’s it. There are no qualifications or subtractions.

Nowhere does the Declaration or the Constitution, for that matter, classify human beings according to the color of their skin.

Far from the principle of equality being a product of racism, it actually struck at the heart of slavery. By making equality the defining principle of the nation, the Founders hoped to put slavery on the course of its ultimate extinction.

While some of the Founders held slaves, they all knew that blacks were human beings.

In a rough draft of the Declaration, Jefferson charged King George III with waging “cruel war against human nature itself” by keeping “open a market where men should be bought & sold.” By calling slaves men, Jefferson clearly recognized their humanity.

Not only did the Founders think that blacks were human beings, but they also acknowledged the wrongness of slavery in principle.

Benjamin Franklin succinctly stated his opinion on slavery: “Slavery is…an atrocious debasement of human nature.” George Washington argued that “there is not a man living who wishes more sincerely than I do, to see a plan adopted for the abolition of it.”

The Founders knew that slavery was wrong in principle, because it violated the rights of slaves to enjoy their natural liberty—the very same liberty the colonists fought for in the American Revolution.

The Founders were well aware that the institution of slavery blatantly violated the principles of the Declaration. But without a strong union that included the Southern states, which would have never ratified a constitution that abolished slavery, the new nation would not have existed.

Of the several compromises made over slavery in the original Constitution, perhaps the most egregious one from our vantage point is the three-fifths clause.

Contrary to common opinion, however, the three-fifths clause did not mean that the Founders thought that blacks were three-fifths of a human being. First of all, the text refers to “other persons”—the term persons meaning human beings. In fact, in 1790 there were approximately sixty-thousand free blacks, who possessed all the same rights as whites.

Secondly, the three-fifths clauses was a compromise between the North and South in which three-fifths of slaves were counted for purposes of taxation and representation. Southerners in fact wanted to count slaves as full persons, thus magnifying their political power. Northerners did not want slaves to be counted at all specifically because they thought it was wrong to further encourage the importation of more slaves.

Though arguments could be made that the Founders made too many compromises, their overall project was to set anti-slavery principles in place so that they could be enforced at some point in the future.

The anti-slavery character of the Declaration and Constitution was grasped by the great civil rights leaders of the past two centuries, Frederick Douglass and Martin Luther King, Jr.

In his famous “I Have a Dream” speech, Dr. King likened the “magnificent words” of the Declaration and Constitution to a “promissory note to which every American was to fall heir.”

King continued: “This note was a promise that all men, yes, black men as well as white men, would be guaranteed the ‘unalienable Rights’ of ‘Life, Liberty and the pursuit of Happiness.’”

Our exceptionalism as a nation is not measured by how far we have separated ourselves from the principles laid out in the Declaration.

It instead derives from how closely we live up to those principles.