9 Photos of Past Popes’ Visits to the US 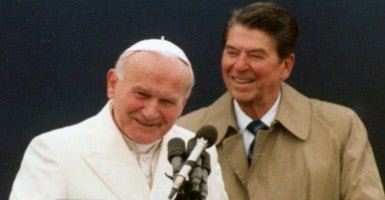 President Ronald Reagan and Pope John Paul II at a press conference in Anchorage, Alaska on May 2, 1984. According to United States Conference of Catholic Bishops, this marked the first time a U.S. president and pope met outside of the White House or Vatican. (Photo: UPI/Newscom)

Pope Francis t-shirts, bobbleheads, happy hour specials … the head of the Catholic Church is visiting the United States this week, and Washington, New York, and Philadelphia have geared up in anticipation. 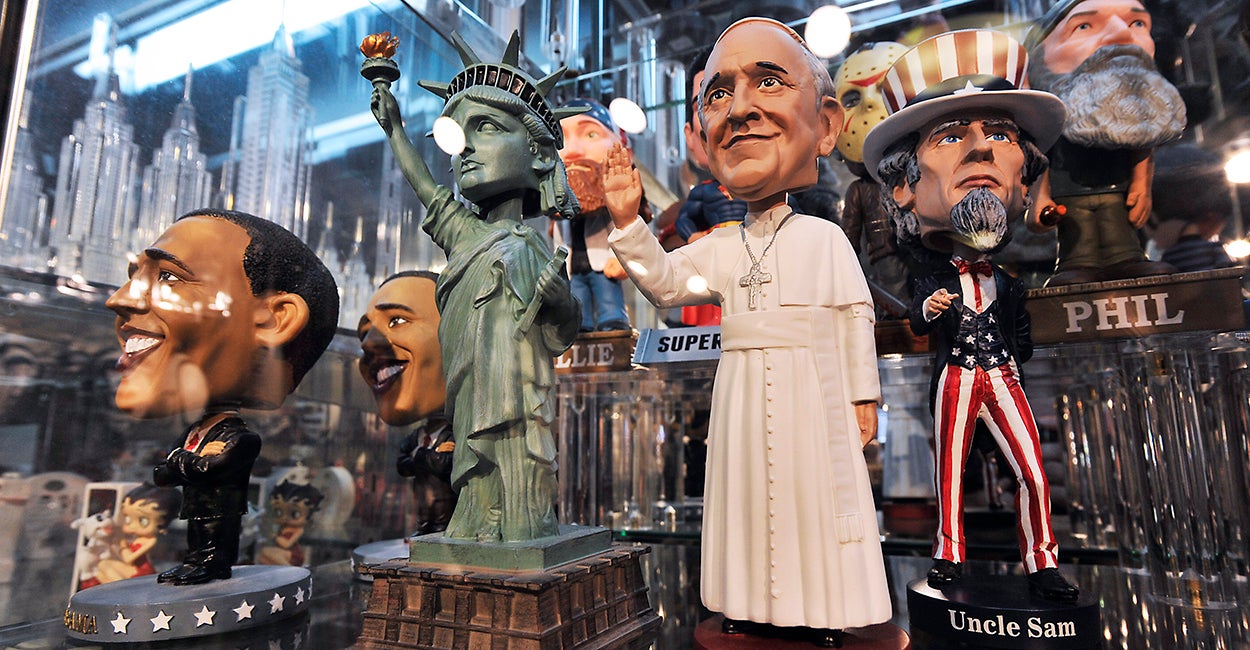 T-shirts as proof the pope is coming to DC. pic.twitter.com/7dl0DhvaaR

The Pope has come early to Isgro’s. Get your Pope cookies and cupcakes today! pic.twitter.com/mjOhcaDWw1

The Pope’s gonna be so stoked when he orders pizza here in Philly and sees the box. ?? pic.twitter.com/09tSDDrXib

Turn up with the Pope Up Beer Garden @thebishopcollar Opening September 24th @Pontifex#PopeInPhillypic.twitter.com/ktRWCzH0wK

Roughly 50,000 visitors are expected to descend on Washington. In Philadelphia, tickets for the Pope’s Independence Hall event were claimed in two minutes. New York City is preparing for total gridlock as 170 world leaders gather to meet him for the annual U.N. conference, as another hundreds of thousands of people try to catch a glimpse. 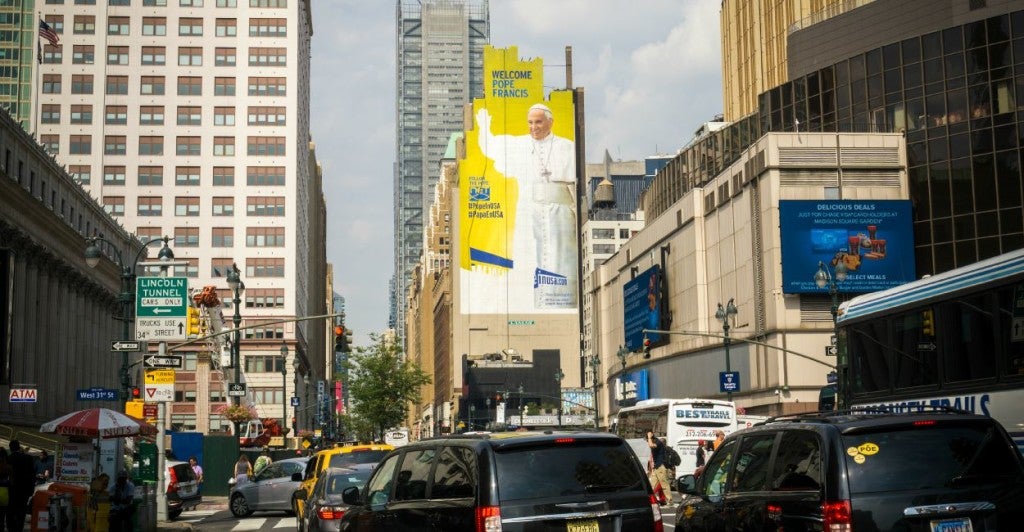 An unfinished billboard near Madison Square Garden is adorned with the image of Pope Francis prior to his visit to New York, seen on Monday, August 31, 2015. (Photo: Richard B. Levine/Newscom)

With all of the buzz and excitement (and bobbleheads), you’d think this was the first time a Pope visited the United States. Contrary, according to the United States Conference of Catholic Bishops, Pope Francis’ visit will be the tenth time a pope has made an apostolic journey to America.
Here’s a look back at past papal visits. 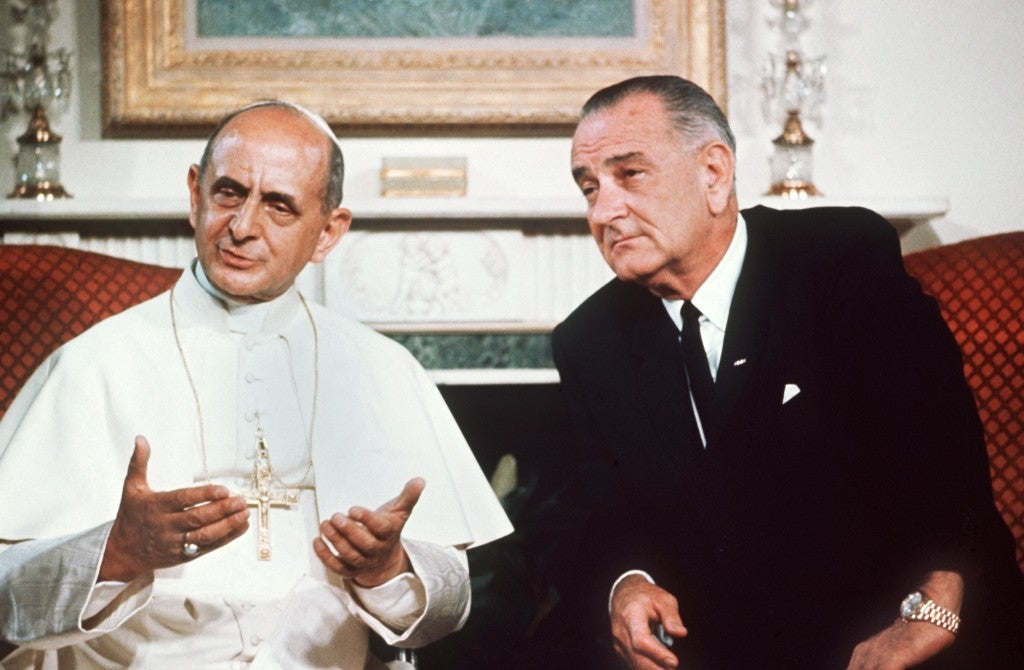 Paul VI was in New York to address the United Nations and met President Lyndon B. Johnson at the Waldorf-Astoria Hotel in New York City. Their 46-minute talk included discussions of peace, civil rights, education, and poverty. (Photo: Schulmann-Sach/Newscom) 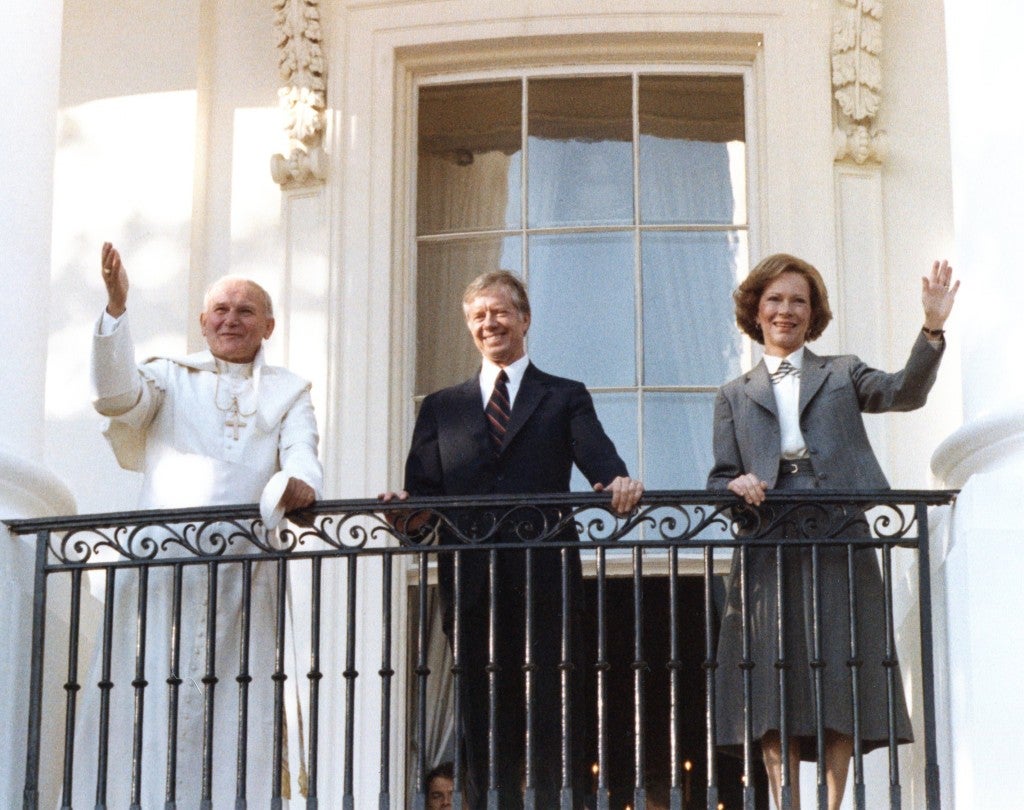 Pope John Paul II traveled to the United States six more times during his tenure and was greeted by the sitting president each visit. 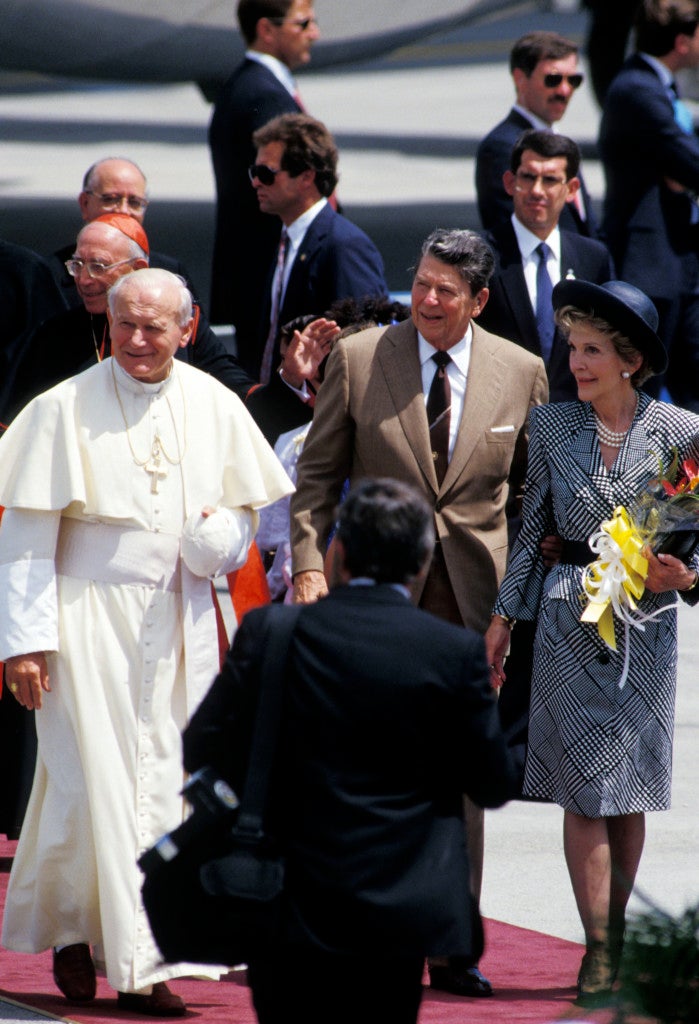 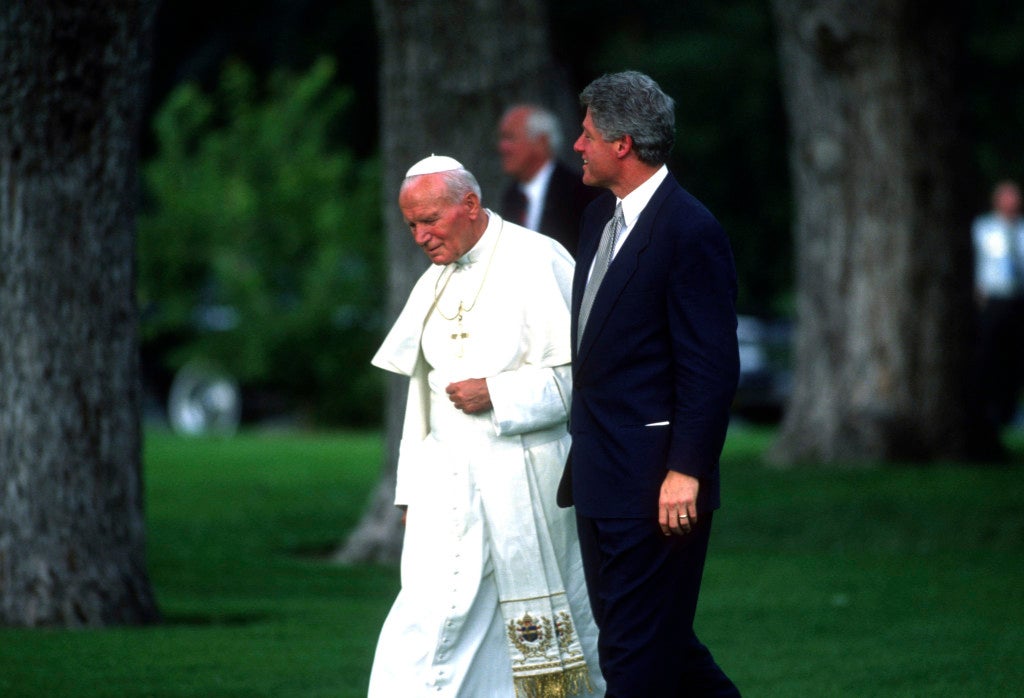 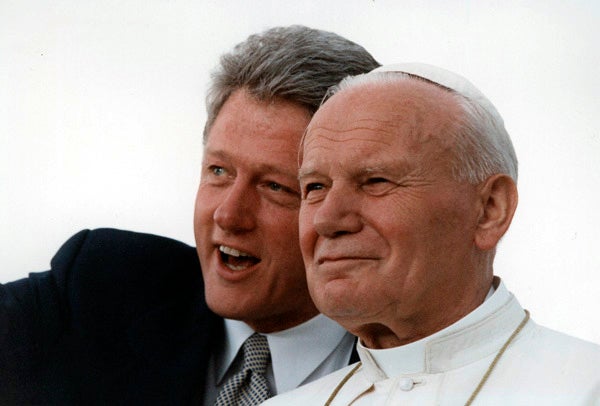 During his October visit in 1995, John Paul II visited Newark, N.J., New York (including Brooklyn), and Baltimore. The Clintons greeted him in Newark. In this 1993 photo of Clinton and Pope John Paul II, the pair admires the crowd at Denver’s Stapleton International Airport. (Photo: Robert McNeely/National Archives) 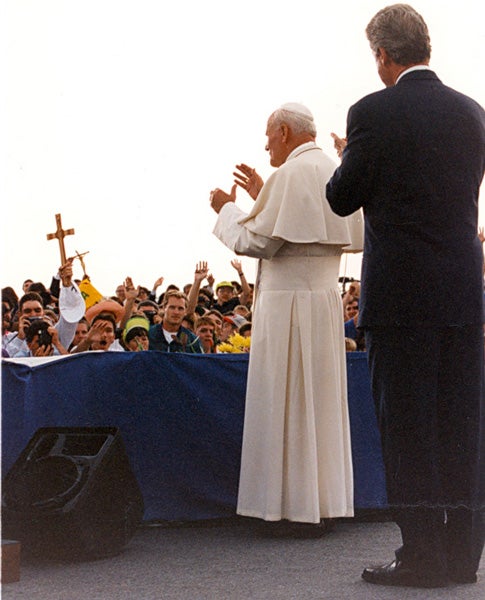 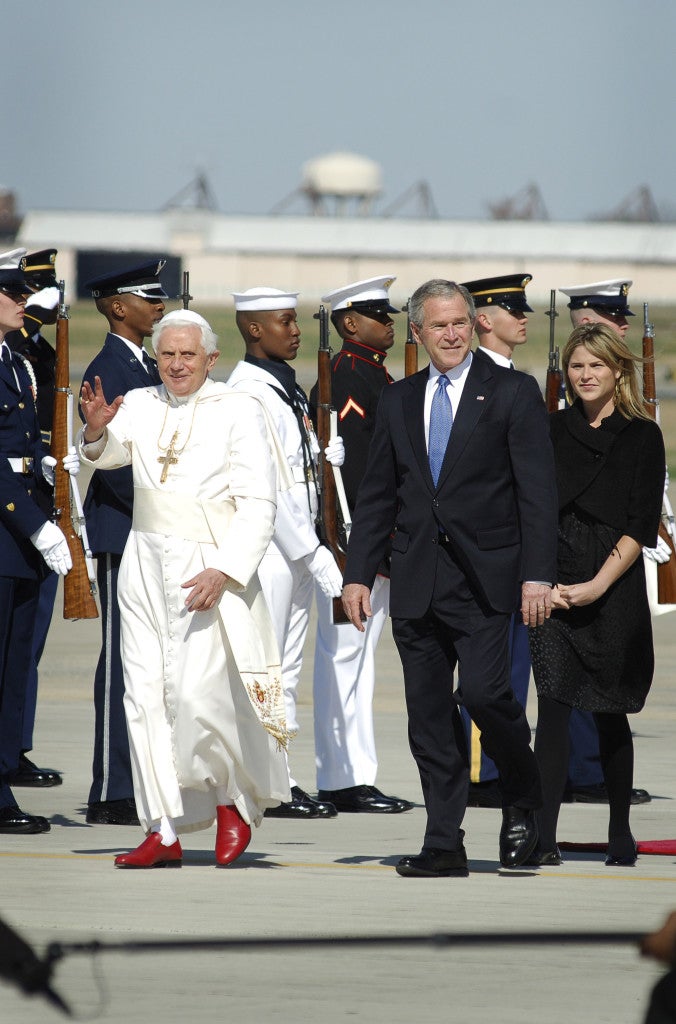 President George W. Bush escorts Pope Benedict XVI at Andrews Air Force Base, Md., April 15, 2008, at the start of his weeklong trip to the United States. 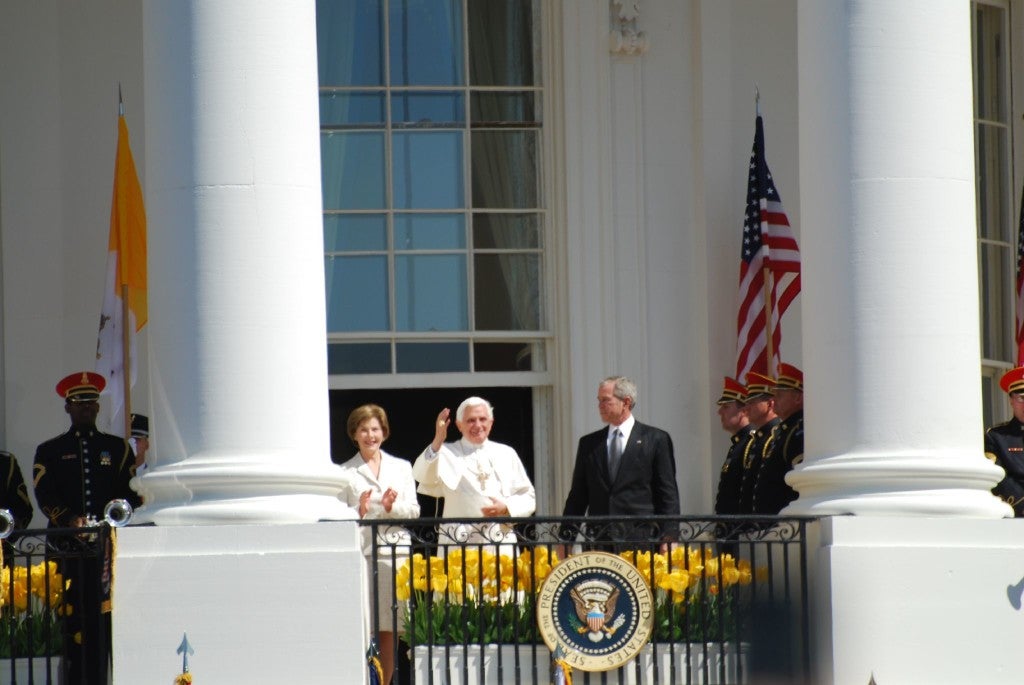 Benedict met with the president at the White House, addressed the presidents of Roman Catholic Colleges and Universities, and held mass at the Nationals Park in Washington, D.C., and Yankee Stadium in New York City. (Photo: John Sonderman/CC BY-NC 2.0)