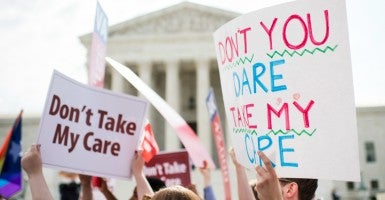 A new report from Americans for Tax Reform found that Obamacare enrollment dropped in 29 states, plus Washington, D.C., between the end of March and June. (Photo: Bill Clark/CQ Roll Call/Newscom)

Obamacare exchanges took a hit over the course of three months earlier this year as enrollment dropped in 29 states, plus Washington, D.C., resulting in a net loss of 238,119 enrollees, according to a report released Monday.

The figure marks a 14-percent drop-off from the administration’s initial projection that about 11.7 million people had selected a plan at the end of this year’s enrollment season.

Ed Haislmaier, a senior research fellow in health policy studies at The Heritage Foundation, said the biggest reason for the decline in enrollment numbers is that the initial report from CMS assesses how many people picked a plan initially, not how many people completed the transaction.

“That’s the difference between putting something in your shopping cart when you’re on Amazon versus actually buying it,” he said.

Another reason for the reduction, Haislmaier continued, is because the administration “presumes” people are eligible in initial projections and then later discovers a number of people who are not qualified. Immigration status is among the main causes of this.

The analysis found that more than 400,000 people had their insurance canceled because of immigration and citizenship issues.

Haislmaier said it is “quite likely” that the enrollment numbers will drop by 20 percent at the end of the year, resulting in a similar attrition rate to last year’s 21 percent.

Any projections about enrollment, he said, “probably need to be discounted” because of the pattern emerging confirming that real enrollment is actually lower than the initial figures accounting for people who have just selected plans but have not yet purchased them.