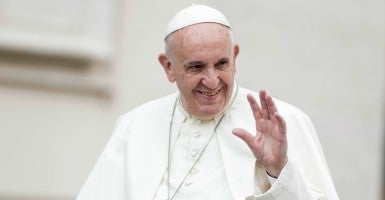 Pope Francis is about to make his first visit to the United States.

According to his schedule, Francis will arrive in the United States on Sept. 22, and he will visit Washington, New York City, and Philadelphia.

Here are 27 facts about Pope Francis:

1. According to his biography on the Vatican’s website, Francis was born Jorge Mario Bergoglio in Buenos Aires on Dec. 17, 1936.

2. His parents, an accountant and a homemaker, were Italian immigrants who had five children.

6. In his first papal appearance, he led the faithful in prayer and asked them to pray for him.

7. Following his election as pope, Francis returned to the hotel he had stayed in while in Rome to pay his own bill, the Associated Press reported.

8. Francis rejected the typical papal apartment for the less formal St. Martha’s House, where he lives among fellow priests. He also lived simply as an archbishop, relying upon public transportation and cooking his own meals, according to a Vatican spokesman.

9. He also “chose not to wear the red shoes made specifically for him, but rather, chose to continue wearing his old, worn-out black shoes from Buenos Aires,” according to Catholic News Agency.

11. He was ordained a Jesuit priest on Dec. 13, 1969, and is the first Jesuit pope. A Jesuit is a member of the Society of Jesus, a Catholic religious order founded by St. Ignatius of Loyola.

13. He has been known throughout his papacy to surprise people who write to him with phone calls, with such frequency that an Italian newspaper published an etiquette guide to a phone call with him.

14. Francis will be the first pope to address a joint session of Congress, according to House Speaker John Boehner’s office.

15. Francis had to have one of his lungs removed when he was a teenager after an infection, ABC News reported.

16. He told his biographers, Francesca Ambrogetti and Sergio Rubin, “I love tango and I used to dance when I was young,” The Telegraph reported.

17. He was trained as a chemical technician before joining the seminary, according to his biography.

18. He has written two encyclicals, or circular letters to the faithful, “Lumen Fidei” and “Laudato Si’.”

19. According to USA Today, Francis drives a used 1984 Renault 4 to travel around the Vatican grounds.

20. In preparation for his trip to the United States, Francis recently held a virtual town hall with Americans hosted by ABC News.

21. Francis once had a girlfriend before he joined the priesthood. “She was one of a group of friends with whom I used to go dancing with,” he said, according to the Inquisitr. “Then I discovered my religious vocation.”

22. According to The Telegraph, Francis speaks “Italian, German and Spanish fluently, in addition to a smattering of English, French and Portuguese. He can also speak a bit of the Piedmontaise dialect too.”

24. Following the example set by Benedict, who was the first pope to use Twitter, Francis tweets using the handle @Pontifex, Latin for “bridge builder.” He is the most retweeted world leader, according to the Catholic News Service.

25. He is a fan of the San Lorenzo soccer team, The Telegraph reported.

26. He has his own emojis. Swyft Media made a set of emojis in honor of his visit to the United States: Popemojis.