This Case Could Open Up School Choice Options for 37 States 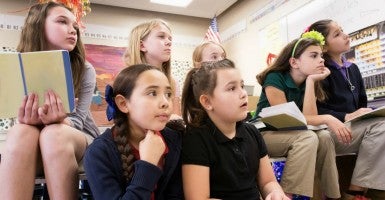 If the Supreme Court of the United States accepts its motion for extension, one school district in Colorado could have fired the shot that results in educational opportunity for thousands of children across America. (Photo: Hill Street Studios Blend Images/Newscom)

On Sept. 2, the Douglas County School District Board of Education filed a request for extension to the Supreme Court of the United States asking for review of the Colorado Supreme Court’s ruling on its scholarship program earlier this summer.

In June, the Colorado Supreme Court struck down the educational choice program on the state’s Blaine Amendment provision in a 3-1-3 vote. The request will be decided by Justice Sonia Sotomayor in October.

If accepted, Douglas County’s petition to the highest tribunal may result in the removal of the obsolete Blaine Amendments, which could allow two-thirds of states to embrace unlimited educational choice for students!

Blaine Amendments are outdated 19th-century anti-Catholic provisions nestled into 37 state constitutions to prohibit public funding moving from then largely Protestant public schools to Catholic “sectarian” schools or institutions. Today public schools have lost their Protestant origins, but these archaic laws are being used to strike down school choice programs outside their original intent. The Colorado case is an example of this.

Kevin Larsen, who is the president of the Douglas County School District Board of Education, said in a press conference in June:

While the students of Douglas County School District and Colorado may have to wait a little longer to get their full access to choice, we believe this will ultimately pave the way for all United States students to be free of the yoke of the Blaine Amendment and to exercise their free choice in educational opportunities

The Douglas County Choice Scholarship Pilot Program is a universal, district-wide school voucher program. It briefly served about 500 students in 21 schools in Douglas County, offering scholarships worth up to 75 percent ($6,100) of the district’s per-pupil revenue, retaining the other 25 percent ($1,525 per student) for the district’s public schools. However, shortly after its enactment, the program was rendered inactive by a 2011 lawsuit filed by the American Civil Liberties Union (ACLU), Americans for Separation of Church and State, Taxpayers for Public Education, and others.

The plaintiffs argued that the scholarship program violated the Public School Finance Act and four provisions in the Colorado constitution regarding religion, including three Blaine Amendments and the compelled support clause. They won the preliminary injunction in district court. However, in March 2013, the Colorado Court of Appeals overturned the ruling, rejecting the plaintiffs’ standing and Establishment Clause claims. The plaintiffs appealed to the Colorado Supreme Court, which handed down the disappointing decision in June on the Blaine Amendment.

The rest of the nation is watching, ready to support this effort that could dramatically change the conversation on school choice in America. The State of Colorado will also join Douglas County’s effort by filing their own petition to the U.S. Supreme Court. Other states are likely to consider similar action.

Also acting as counsel in the case will be The Institute for Justice, who filed a motion of intervention early on in the Douglas County case. The Institute for Justice litigated the landmark United States Supreme Court ruling Zelman v. Simmons-Harris (2002), in which the U.S. Supreme Court decided that a state-sponsored voucher program does not violate the Establishment Clause of the U.S. Constitution when the program is neutral with respect to religion and the “money follows the child.”

While Douglas County lost the battle in the Colorado Supreme Court, the fight for parental choice in education isn’t over.

If the Supreme Court of the United States accepts its motion for extension, one school district in Colorado could have fired the shot that results in educational opportunity for thousands of children across America.