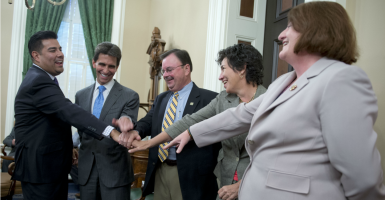 A California state bill its sponsors say will prevent discrimination based on sexual orientation and gender identity at private universities is threatening to expose faith-based schools to enormous legal threats, school officials warn.

SB 1146, introduced in February by state Sen. Ricardo Lara, D-Bell Gardens, which passed the state Senate May 26, is designed to close “a little-known loophole” in California law under which private colleges can make admission, housing, and faculty decisions based on gender identity, gender expression, and sexual orientation, according to a press release from Lara’s office.

“Under state law, at least 34 California universities are exempt and do not have to comply with state nondiscrimination laws, leaving thousands of students open to discrimination based on their sexual orientation or gender identity,” Lara said in a statement provided to The Daily Signal. “These universities have a license to discriminate and students have absolutely no recourse. Addressing this issue is long overdue.”

But critics say that this “loophole” is a deliberate and necessary protection to ensure that their exercise of religious liberty is protected.

“For us, the most chilling effect of this bill if it becomes law is it could result in an attempt to eliminate faith-based decisions when it comes to admission, housing, and perhaps even employment at faith-based campuses,” John Jackson, president of William Jessup University in Rocklin, California, said in an interview with The Daily Signal.

Even worse, critics argue, Lara’s bill might make it impossible for private schools to operate under any faith-based principles.

This is because SB 1146 dramatically tightens the criteria under which a school can cite freedom of conscience in making curricular and administrative decisions.

California’s education code already explicitly prohibits discrimination on the basis of gender identity, gender expression, and sexual orientation, but exempts “an educational institution that is controlled by a religious organization if the application would not be consistent with the religious tenets of that organization.”

Under Lara’s  legislation, that exemption would shrink dramatically, covering only “certain educational programs and activities of a postsecondary educational institution that is controlled by a religious organization.” The exception would apply to programs that “prepare students to become ministers of the religion, to enter upon some other vocation of the religion, or to teach theological subjects pertaining to the religion.”

As a result, administrators at faith-based colleges worry that they will soon have no legal recourse to make decisions based on their religion.

“The problem is that it provides a course of legal action for any student that feels they’ve been discriminated against in any other setting,” Jackson said, adding:

So if this bill passes, and a student comes to our school and says, ‘I feel really uncomfortable that chapel was mandatory, or that the professor opened class in prayer, or with community service’—that is a required part of our faith commitments—the bill as written creates a private right of action, meaning that the student would have the right to sue a school over what faith-based schools consider a core part of our spiritual life.

Additionally, in a move that mirrors the Department of Education’s May release of documents revealing colleges that had appealed for religious exemptions to Title IX discrimination requirements, SB 1146 would require faith-based schools to disclose their religious exemption publicly on campus and in all promotional materials, including brochures, letters to high school applicants, and tours for new or prospective students.

Roger Severino, director of The Heritage Foundation’s DeVos Center for Religion and Civil Society, called the California bill “a direct assault on the ability of religious educational institutions to participate in public life and remain true to their religious identity.”

“There is no good policy rationale for stripping exemptions that have worked well for decades and have helped foster, not hinder, diversity in education,” Severino said in an email to The Daily Signal.

Several of the more radical provisions originally in SB 1146, including one that would allow students to bring civil suits against schools that qualified for waivers, already have been neutralized through amendments. But critics say that the amended bill continues to represent an existential threat to the survival of faith-based colleges and the diversity of college choice across California.

“It’s actually an attempt to decrease diversity in higher education rather than increase it,” Jackson said. “Students attend our schools voluntarily, and we think that the senator is making a grave mistake with this bill.”