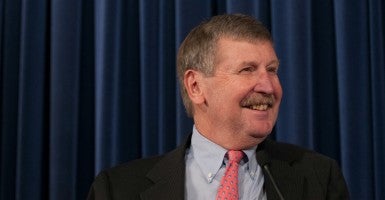 The modern conservative movement has lost one of its real heroes. John Von Kannon, “the Baron,” has passed to a better place after a long struggle with cancer.

Someone wrote that John had been battling cancer for more than a year. That’s true, but as Bob Tyrrell, the longtime editor of The American Spectator and John’s first boss, reminds us, John also battled cancer early in his life. In the mid-1970s, Bob and a group of us threw a party for John in New York City because he was dying of leukemia. But John managed to overcome it then, and he shared with all of us another 40 years of friendship, fellowship, leadership, and wise counsel.

John entered my life when he became a young member of The Philadelphia Society in 1974. We struck up a friendship, and it was soon after I moved to The Heritage Foundation that I realized what a great member of our team he would be. So, for more than 35 years, we were colleagues at Heritage. From our earliest days together, John kept us focused on building the relationship between Heritage and our supporters and making Heritage what it is today.

Over the years, he became the conservative movement’s premiere fundraiser.

John never viewed himself as a “rainmaker,” but rather as a “matchmaker.” When he met potential donors, he’d spend most of his time listening. He wanted to learn their core values, what they cared most about, and what their goals were—and then he’d introduce them to the people and organizations that held similar values and could advance those goals with them.

He was bright and quick and witty—oh, was he witty! As Heritage President Jim DeMint said: “John had an absolutely outrageous sense of humor.” And the happiest memories about John for so many of us will be his jokes—he never heard a good story that he didn’t want to share with his legion of friends.

Jane Freeman, a loyal member of that legion, told him last week, “I wonder if you knew, lo these 50 years, whenever I attended one of our conservative functions, the first thing I did was scan the room for that smirky face of yours. I have always treasured your smile and your unfailingly cheerful demeanor even in the worst of times.”

What do we think of when we think of John, besides his sense of humor? Certainly, to so many of us, it has always been his willingness to share his insights, expertise, and friendship. The legion of his conservative movement friends, some of whom he hadn’t heard from in many years, are recounting his helpfulness in writing their vision statements, in refining their business plans, in structuring their fundraising efforts, and in building their organizations. It is truly a remarkable picture of a man always willing to give a little more to the cause he believed in so passionately.

John was a history buff. His intellectual curiosity was boundless. He and I would be on an airplane to meet with a donor in Milwaukee or Minneapolis or Memphis. Inevitably, I would be plowing through a stack of memoranda, scribbling comments on them, while John would be calmly reading a volume of biography or American history. He loved serious books, and he never missed the chance to read them. But, without fail, when we got to our meeting, he was always prepared, because he knew his audience and his mission.

Heritage’s Board Chairman Tom Saunders said it so well: “John’s passing is beyond sad. I don’t think I’ve ever known a more genuine person of such quality, integrity and commitment. He is the best development person I have ever been involved with. I say that as the greatest compliment I can give to someone in his profession. Raising money for any cause is hard work and requires tenacity and commitment beyond most people’s understanding. His contribution to the conservative cause is immeasurable. He not only built relationships second to none, but Heritage donors loved him—loved him! He was the best.”

John was blessed with his wife Cindy and his children, Rachel and Jack.

He had prayed and had come to accept the will of the Lord. In the final weeks, his example inspired the steady stream of friends who came to say goodbye. Others sent letters, cards, and emails. They called him, and inevitably they were the ones who were comforted by his calm spirit.

Earlier this year, The American Spectator conferred its Lifetime Achievement Award on John. He was not able to accept it in person, and he asked me to do so on his behalf. I concluded my comments with two questions: “What is John Von Kannon? And who is John Von Kannon?”

“‘What he is’ is a gifted fundraiser and a leading conservative. ‘Who he is’ is a wise counselor, a trusted confidant, a good friend, and, most importantly, a good man.”

Just a few months ago, Heritage presented John with our highest honor: the Clare Boothe Luce Award, recognizing outstanding leadership and dedication to the conservative cause. Past recipients of the award include conservative icons Ronald Reagan, Margaret Thatcher, and William F. Buckley Jr.

The Philadelphia Society, which he had advised so well as a volunteer for so long, made him a distinguished member, joining the ranks of Milton Friedman and F.A. von Hayek.

John was touched by these honors, but he never let them go to his head. And he never gave up being helpful to others. When I last visited with him, he kept coming back to mutual friends and how they were doing and how they could be more involved in building the movement and saving our country.

For all of us, our ongoing battles for the ideas of freedom and opportunity have lost a real champion with the passing of John Von Kannon, and we have lost a dear friend.