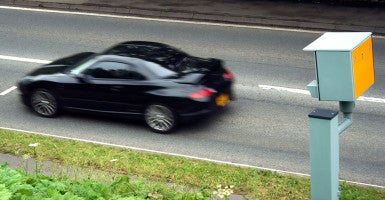 A new study suggests speed cameras may have near and long-term benefits. (Photo: iStockphoto)

A new study by the non-profit Insurance Institute for Highway Safety (IIHS) is shedding light on the effectiveness of pesky speed cameras, suggesting they may reduce the likelihood of fatal accidents as a result of speeding by up to 19 percent.

The study, which also found that speed cameras positively affect long-term driving habits, was funded by the insurance industry and looked into speed camera implementation in Maryland’s Montgomery County. Speed cameras were first introduced there in 2007; in 2014, the county operated 56 fixed cameras, 30 portable cameras that moved through “camera corridors,” and 6 mobile speed vans.

“Cameras have reduced by 59 percent the likelihood of a driver exceeding the speed limit by more than 10 mph, compared with similar roads in two nearby Virginia counties that don’t have speed cameras,” the IIHS’s report reads, noting that if automated speed enforcement were used nationwide, “more than 21,000 fatal or incapacitating injuries would have been prevented in 2013.”

The study contrasts against investigations that have found camera-automated ticketing to be ineffective. In Illinois, for example, red-light cameras were found to increase rear-end accidents by as much as 22 percent, leading to the passage of a camera ban by the Illinois State House of Representatives earlier this year.

The findings also offer concrete evidence in favor of a program that some insist is at worst a dangerous violation of privacy and at best little more than a revenue stream, making local government big money off the backs of motorists who are yet to familiarize themselves with the locations of certain cameras.

As highlighted by the Maryland Driver’s Alliance, an organization that opposes automated ticketing efforts in the State, speed cameras are now a $77 million industry in Maryland.

“There is always the problem of the law catching up to technology,” says John Seibler, a visiting legal fellow in the Edwin Meese III Center for Legal and Judicial Studies at The Heritage Foundation. “That’s always a chase, and no one is really ever content with it, ” Seibler, who specializes in privacy and overcriminalization issues, adds.

In particular, opponents decry the unintended privacy violations that can accompany automated ticketing software, as well as the lack of human-assessed blame that accompanies a traffic stop by a police officer.

“Consider that on any given day, the average American going about his daily business will be monitored, surveilled, spied on and tracked in more than 20 different ways, by both government and corporate ears and eyes,” writes John W. Whitehead, a human rights attorney and founder of the Rutherford Institute, adding that technology “has upped the stakes dramatically.”

Supporters of technological advancements like speed cameras acknowledge that automated ticketing frees up officers to pursue more detrimental criminal activity, and can even assist in the capture of more dangerous criminals.

“Let’s say a murder suspect just drove down the street, suddenly the cops have a means of identifying him and placing him,” Seibler says.

The study also found that “speed-camera corridors” in Maryland, long stretches of road in which cameras are moved back and forth to keep motorists from knowing where they may be caught speeding, further decreased dangerous driving, reducing the potential for a fatal crash by an additional 30 percent.

Lastly and perhaps most surprisingly, the IIHS study found that most drivers in Maryland were aware of the program and that—despite 59 percent of them having been ticketed—62 percent of drivers approved of speed cameras.

“If the people in a community have decided that they want to set the speed limit at a certain speed, that should be enforced,” Seibler says. “These cameras are just expanding the deterrent effects of a patrol car to a 24-hour-long cycle.”