The Consistent Weaknesses in Obama’s Deals 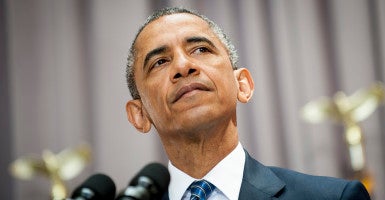 President Obama could use a primer in the art of making better deals. (Photo: Abaca Press/Pool/Sipa USA/Newscom)

In his first term, President Obama paid lip service to the value of diplomacy but did little negotiating. Now he’s stepped up the pace, with the Iranian nuclear deal and a trade pact with the EU in the offing. He’d have done better to have done less.

Like unhappy families, bad agreements are each bad in their own way. And of course there are degrees of badness: no trade deal, no matter how implausibly dreadful, could be worse than a nuclear deal gone wrong. But bad agreements do have a few features in common.

The major postwar agreements—from the General Agreement on Tariffs and Trade to the North Atlantic Treaty that created NATO—stood the test of time because they were good deals that met real needs. They were serious, clear, and substantial, and they benefited everyone.

But since the end of the Cold War, the U.S.—and the West as a whole—has lost the diplomatic touch. These countries began to negotiate for symbolism, not substance. From the Kyoto Protocol to the U.N.’s human rights agreements, negotiation became about looking good, not doing good.

These were aspirational agreements. And so, unfortunately, is the Iran deal. Obama’s aspiration isn’t merely to appear to be limiting the Iranian nuclear program. It’s to make the Iranian regime into an American partner that will co-operate in stabilizing the Middle East. As Obama put it in 2014: “I don’t really even need George Kennan right now.” He didn’t need the godfather of Soviet containment: he needed, he said, the right partners. The Iran deal is not about anything as small as stopping the spread of nuclear weapons; it’s about finding a partner.

Much the same is true of Obama’s trade deal with the EU. Here, the aspiration is to give the EU a pat on the head, to reassure it that, in a world where slow growth is steadily sapping Europe’s geopolitical significance, it still matters to the U.S.

As American commentator Charles Kupchan puts it, the U.S.-EU deal is about solving the “crisis of governance” in the EU and thereby relegitimizing it, and “creating a renewed appreciation on both sides of the Atlantic of the value of transatlantic co-operation.”

In the abstract, trans-Atlantic co-operation is great. But the trade deal, like the Iranian one, is high on Obama’s agenda not because it will deliver much directly, but because it supposedly has symbolic power that will deliver the goods indirectly.

In this sense, the deals are a lot like the view that liberals entertained of Obama himself in 2008: that he personally embodied change. What that view failed to recognize was that presidents have to live in the real world: Vladimir Putin isn’t simply going to go where you want him to. And that’s the other problem with these deals: they are heavy on hopes, light on enforcement.

They focus too little on ensuring that the agreements don’t eat themselves alive. But then, if you really took enforcement seriously, you wouldn’t do the deal at all. That’s because of a basic rule of diplomacy: don’t sign an agreement that deprives you of the ability to enforce the agreement. But the Iran deal does exactly that. Supposedly, the motivation for Iranians to keep their word is the threat that U.S. and European sanctions will “snap back.”

If you think that, two or three years down the road, when major European firms have moved into Iran and the existing list of sanctioned Iranian firms is out of date, the West can simply reimpose sanctions, you’re kidding yourself. Once sanctions go, they’re not coming back.

As for the U.S.-EU trade deal, it’s often described as an effort to promote free trade. But by and large, we already have free trade in the North Atlantic. We fought and won that battle years ago. Yes, a few tariffs remain, and yes, we should get rid of them. But really, the biggest threat to the ability of people to buy and sell freely in the West isn’t the rules that foreigners impose on us. It’s the rules that we impose on ourselves. We’ve met the enemy of free trade, and he’s us.

And that’s where the problem of enforcement comes in. The U.S.-EU trade deal will be policed by big government bureaucracies co-operating to make sure we have the same rules. That will make it easier for multi-national corporations to do business, which isn’t necessarily bad.

But it won’t make trade easier or cheaper for most of us, because the rules will still be there; they’ll just be easier for big business to navigate. The tighter this agreement becomes, the less free trade there will be in it. Enforcing the deal will destroy what it’s supposed to achieve.

It might be that all of this is just a case of bad diplomacy producing bad agreements, of which there have been many since 1989. But note the final thing that these agreements have in common: they will tie the hands of the U.S. (and the U.K.) long after Obama has left office.