What’s Next for the Marriage Debate After Supreme Court Ruling 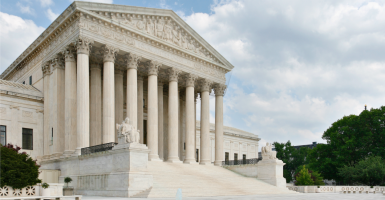 Far from settling the marriage debate, the Supreme Court’s ruling on Obergefell v. Hodges raised more questions, according to four participants in a panel discussion Tuesday at The Heritage Foundation.

Regardless of their views on same-sex marriage, the panelists said that the majority’s opinion in the Obergefell ruling is unclear, and fails to provide accommodation for individuals who object to same-sex marriage on religious grounds.

The panelists weighed in on the future of the marriage debate.

Ryan Anderson, senior research fellow at The Heritage Foundation and author of the new book “Truth Overruled: The Future of Marriage and Religious Freedom,” argued that supporters of traditional marriage can learn valuable lessons from the pro-life movement.

“The truth hasn’t changed, regardless of what five justices have said,” Anderson said.

Anderson said that the pro-life movement never accepted that Roe v. Wade settled the abortion debate. Pro-lifers condemned the ruling as judicial activism and legislating from the bench.

They immediately sought protection “to live in accordance with the truth,” Anderson said, such as preventing the taxpayer funding of abortion.

Next, they worked to overturn the ruling.

Anderson said that “recapturing the truth of marriage,” should be reflected in both law and culture.

“People can disagree on this contentious issue without being disagreeable,” Anderson said. Panelists at a discussion on marriage at The Heritage Foundation. (Photo: Steven Purcell)

Robert George, the McCormick professor of jurisprudence at Princeton University, said the ruling was a redefinition of the institution of marriage, not an expansion of it.

The ruling also paves the way for legal recognition for the “’throuple,’ or three person couple,” he said.

Mollie Hemingway, the senior editor of The Federalist, said the Obergefell ruling was “poorly reasoned,” and “removed the debate from the public square.”

She said that mainstream media figures also treated the abortion debate as if it were “settled” by Roe, and that simply isn’t true.

Hemingway argued that the ruling has exposed “tension” between “religious freedom and the new regime.”

Ilya Shapiro, the senior fellow in constitutional studies at the Cato Institute and the editor-in-chief of the Cato Supreme Court Review, said it is possible to be “for” same-sex marriage, but also “for” the rights of “the butcher, the baker and the candlestick maker.”

Shapiro said that Justice Kennedy “muddied these waters with his incomprehensible ruling.”