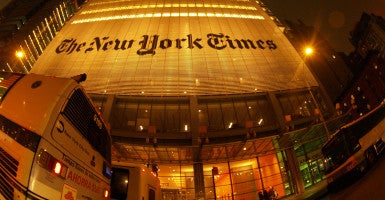 The company commissioned by Planned Parenthood to analyze a series of undercover videos played a key role in 2012 to undermine Mitt Romney’s presidential campaign.

Planned Parenthood hired Washington, D.C.-based Fusion GPS to examine videos released by the Center for Medical Progress over the past two months that have raised questions about the sale of fetal body parts.

Fusion GPS’s analysis was critical of the “edited” videos, suggesting they “have no evidentiary value in a legal context and cannot be relied upon for any official inquiries,” such as congressional investigations.

The New York Times was among several media outlets that pounced on the analysis. In reporting the story, however, the newspaper failed to disclose details about Fusion GPS’s past work. A report from the Weekly Standard noted that Fusion GPS is “an opposition research firm with ties to the Democratic party” that has “a history of harassing socially conservative Republican donors.”

One of those donors, Frank VanderSloot, was a target of Fusion GPS’s work in 2012. As a donor to a PAC supporting Romney, VanderSloot was included on a list of supporters who supposedly had “less-than-reputable” reputations.

“We’re going to try to do something somewhat new that is not going to be journalism, per se,” Simpson said at the Logan Symposium on Investigative Reporting at the Berkeley Graduate School of Journalism in 2009.

“Myself and Sue Schmidt, my partner, have formed a private company to try to see if we can’t pioneer yet another new model to keep investigations going, to keep doing things in the public interest,” Simpson said. “We’re hoping that people who have an interest in bringing things out, to do something about corruption, fraud, will come to us. They don’t necessarily have to have completely pure motives, you know, frequently there’s people who are in business and they’re sick of competitors who cheat, and they want to see things exposed, that’s the sort of model for our new project.”

In 2009, The Hill reported that Simpson, while with SNS Global, was a registered lobbyist for Sheik Khalid bin Saqr al-Qasimi. The New York Times described al-Qasimi as “a prince from the United Arab Emirates known for burning an American flag to protest the invasion of Iraq.”

Simpson left SNS Global in 2010 and became the chief executive of Fusion GPS shortly after, according to his LinkedIn profile.

The Daily Signal reached out to Fusion GPS for comment and didn’t hear back.

In 2012, The Wall Street Journal reported that Fusion GPS was the firm behind an Obama campaign website called “Keeping GOP Honest.” The website exposed a group of eight private citizens who had donated to a super PAC supporting Romney’s presidential campaign.

One of the individuals, VanderSloot, chief executive of Melaleuca, along with his wife, later faced an IRS audit that he suspected was tied to his inclusion on the list.

“It’s scary to say the least, to have your president saying that you’re a bad guy,” VanderSloot told The Heritage Foundation in a 2012 interview.

In a series of statements over a period of several weeks, spokesmen for Planned Parenthood have called the videos “heavily edited” and denied illegal conduct.

Three congressional committees and several states are currently investigating Planned Parenthood following the release of the videos. Profiting from the sale of fetal human body parts is a felony in the United States.