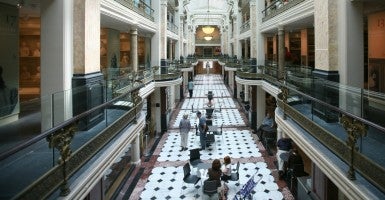 A group of pro-life leaders plan to demand that a bust of Margaret Sanger, the founder of Planned Parenthood, be removed from the National Portrait Gallery's "Struggle for Justice" exhibit. (Dennis Brack/Newscom)

A group of pro-life leaders will hold a press conference Thursday in Washington, D.C., to demand that a bust of Margaret Sanger, the founder of Planned Parenthood, be removed from the National Portrait Gallery.

The bust of Sanger is currently displayed in the National Portrait Gallery’s “Struggle for Justice” exhibit.

In an interview, ForAmerica Chairman Brent Bozell, who will attend the conference, told The Daily Signal that the bust “doesn’t belong in a taxpayer-funded museum.”

For her image to stand alongside the likes of Martin Luther King Jr. and Rosa Parks, he said, “is an insult.”

Bozell said the pro-abortion movement has become “so militant, so radicalized,” that they “celebrate her as their patron saint.”

The exhibit website hails Sanger’s “crusade” against “laws forbidding dissemination of contraceptive information.” The website acknowledges her “association with the eugenics movement” but asserts that eugenics was a philosophy “that for a time was endorsed by many of the era’s prominent thinkers.”

Upon learning that Sanger was included in the exhibit alongside figures such as Martin Luther King Jr., Rosa Parks, and Susan B. Anthony, Bishop E.W. Jackson, the president of STAND, enlisted fellow pastors and launched a petition to request that the museum remove the bust from the exhibit. More than 13,000 people signed the petition, but the museum declined the request.

“They say they are simply acknowledging Sanger’s contribution to making contraceptives—and later abortion—available to poor women, not making her a hero,” Jackson said. “But displaying her bust in a ‘Struggle for Justice’ exhibit alongside Dr. Martin Luther King Jr. and Rosa Parks is calling her a hero. Sanger was no hero. Her motive was not to help poor women, but to stop them from having children that she didn’t believe were fit to live. She saw them as defective.”

Bozell, Jackson, and pastors will be joined at the press conference by Lila Rose, the founder and president of Live Action, and Marjorie Dannenfelser, the president of the Susan B. Anthony List, among others.

Sanger, a proponent of eugenics, founded the American Birth Control League in 1921, which became part of the Planned Parenthood Federation of America in 1942.

In an article titled “Birth Control and Racial Betterment,” published in 1919, Sanger wrote that the “diseased and incompetent masses” threaten to “overwhelm all that eugenics can do among those whose economic condition is better.”

“Birth Control, on the other hand, not only opens the way to the eugenist, but it preserves his work,” Sanger wrote.

Sanger wrote in her book “Woman and the New Race” that the population control methods she advocated would bring about the “materials of a new race.”

“Birth control itself, often denounced as a violation of natural law, is nothing more or less than the facilitation of the process of weeding out the unfit, of preventing the birth of defectives or of those who will become defectives,” Sanger wrote.

On its website, Planned Parenthood calls Sanger one of the pro-choice movement’s “great heroes.” The organization holds annual award ceremonies in her honor.